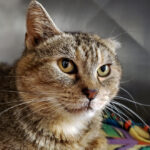 Where did you learn to crawl?

Where did you learn to walk?

Where will you learn to crawl again?

Where will you be when you learn how much Fergie hates the song Fergalicious? 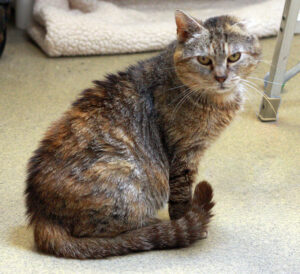 Some cats come to us with names that fit as elegantly as elbow-length gloves. Kozmo is intergalactic. Cotton was the fabric of our lives. Crinkle Bob is Crinkle Bob.

Fergie is neither a Black Eyed Pea nor a former member of the Royal Family.

Forged in the fires of secret suffering, Fergie is more mezzo-soprano than pop star, epic oratorios soaring over all of her hours. Trained in toughness, she’s more fiddlehead fern than English rose, unfurling like a fist into fingers that finally dare to touch and tickle the world.

With one ear missing and one hundred percent of her fire intact, she is honesty incarnate, a five-spice blend of stories she will share on her own good time. She is also, at last, learning to have a good time.

But I’m tumbling ahead of myself.

When the wider Tabby’s Place network of saints and angels first found Fergie, she had her belly to the ground. More Navy SEAL than worm, the little nutmeg cat was wrapped into herself as tight as a filbert, her jaw in ruins, her teeth in agony, and her ear in absentia. 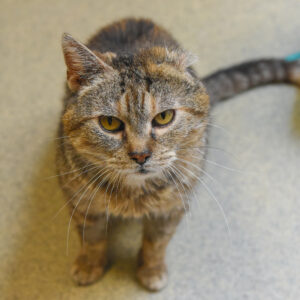 Since we live in a wonderful, terrible world where mercy out-shouts misery, Fergie also crawled into a better story, and eventually into the arms of Tabby’s Place. But in many ways, the stumbling had just begun.

She was suddenly surrounded by people incapable of not calling her “Fergalicious.”

She was suddenly subject to creatures intent on making things better by first making them worse. Those armies of ear mites (likely the culprits behind her missing ear flap) had to be treated. Those traumatized teeth had to be taken. That injured jaw — riddled with necrotic tissue, quite literally dead — had to do a few rounds with Dr. Fantastic at the world-class specialty hospital where cats’ worlds get wrung before songs can be sung.

She was suddenly made aware of the existence of other cats, a fact that outraged her.

She wished she could be an actual hazelnut.

I do not mean that she wished to shrink. She wished, rather, to walk. 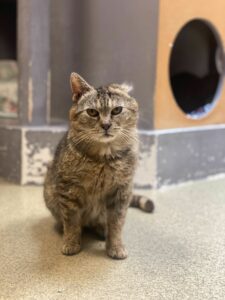 …and all the more precious, profound, and beloved for its smallness.

And so the crawling cat the color of a pecan persevered.

She persevered through the pain of her treatments.

She persevered through the pleasures of life in a foster home so tender and triumphant, it opened Fergie’s hazel eyes to the kind of hope that could save the entire nutty world. (Fergie’s foster parent is such a spectacular person, they shall remain unnamed to protect the magnificent, except to say that they are Jae and they are my personal hero.)

She persevered through our persistent playing of the entire oeuvre of Black-Eyed Peas songs.

She persevered, and unfurled, and walked, and won. 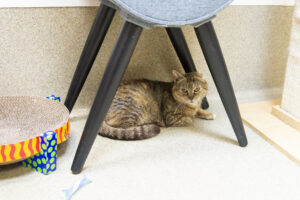 The cat who once crawled had come into her own on all fours, landing squarely in our FIV+ Suite. But just when life should have been as sweet as petit fours, the cat with the petit ear and the grande ego realized that she’d fallen into a bowl of mixed nuts.

Wallop-worthy cats. Dunderheads and dimwits. Walnuts and pistachios and circus peanuts and whatever sort of salty species you would call Spaghetti.

Fergie would have to learn to crawl all over again.

The physical pain was over, but now came the Top 40 that topples us all. Fergie tried to cover her ears, especially the petit one. It was no use. Every living creature has to face the music of humility, and community, and creativity. Every living creature has to learn to find her place among the nuts and the nebulas, those who will nurture you and those who will nibble the ragged ends of your ears or your sanity.

Fergie was, unquestionably, the most important cat in the universe. 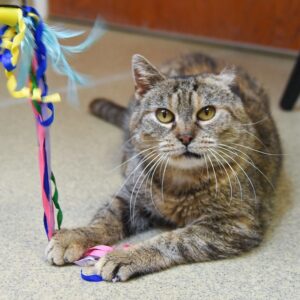 But she was not the only cat in the universe.

And so she had to learn to crawl all over again.

As a high-powered executive too busy to read our memos carefully, Fergie mis-read that directive and thought it said “brawl.” No less than Crinkle Bob (MOST EXALTED IS HE) found himself on the nutty end of Fergie’s opera, with nose scratches to prove it.

But the second crawling, the one that calls us all, never comes easily.

We don’t want to need.

We don’t want to bow.

We don’t want to watercolor our ideas into the great mural where everyone — even the Spaghettis and our own personal spaghetti-o’s, you know yours and I know mine — has a brush.

We don’t want to walk shoulder-to-shoulder with peers who rattle our ears, prickly people who believe peculiar things, nutlets and cutlets who gut our understanding of the world and ourselves.

We don’t want to remember that we are all hazelnuts, all together, all tenderly held in orbit by a love that leaves no one behind, no, not even Spaghetti.

But the music will mend us all in time.

The sunlight will smile on that horrid person just so, and we’ll see a sister, a brother, a fellow pilgrim on the long walk home.

Our hand will touch another’s as we reach for the same cashew, and talons will turn to fingers that can squeeze ours, and play the piano, and rebuild the nutty little world we have to share.

One cat will dream beside another, and wake up to find that sharing the same blanket did not cause the sky to collapse.

Fergie will find that life can be both fierce and delicious. She will crawl, walk, run, and rampage.

And so, if our tiny ears and tremendous hearts are tuned to the right station, will we.

1 thought on “All fours”