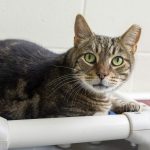 It is never easy to write a “Forever Loved,” not even those times when the words just pour out. And this is not one of those times.

When it comes to Wonton, words come, get all jumbled up, and skitter off in all directions. They are as afraid of being recognized by humans as Wonton himself was. So, instead, for the moment, we’ll focus on the humans. 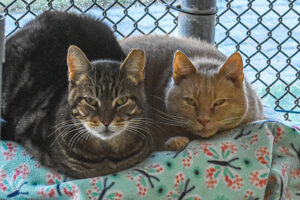 At Tabby’s Place, there are souls of starlight and moonbeams, of fire and water, of breadth and depth. These are the people who make Tabby’s Place a true sanctuary for cats such as Wonton. Their love and kindness knows no bounds, especially when it comes to feral felines who establish firm boundaries with a solid double whap. (Claws in, never teeth. Okay, that’s really about a singular feline.)

Steven. Another gentle, tender soul that took care of Wonton in his way. 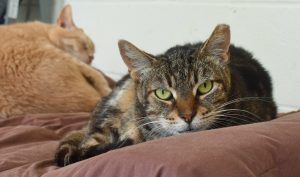 Wonton came to Tabby’s Place a number of years ago, when the feral life he had known was no longer healthy for him. Among others in the BFF (Befriending Fearful Felines) volunteer program, I was assigned to Wonton. He didn’t want me. He didn’t want people to exist at all.

Over time, and with a lot of help from Steven, Wonton came to be much more than my BFF. For one thing, he was my teacher. Wonton taught me about firm yet gentle boundaries (refer back to those whaps). He also taught me about the value of equally gentle yet firm persistence and patience. 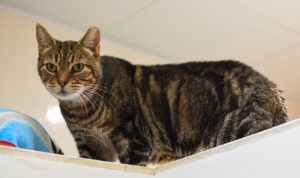 It took a lot of time and more than a few contortions (and the necessary recuperations afterward), but Wonton also taught me how to and not to approach him (did I mention he was chicken?). Eventually, he let me discover how he best liked to be pet and skritched…as long as he always had an escape route and Steven nearby, at least until recently.

Every Friday, I imposed myself on Wonton’s space and patience. Each week, I spoke with him. I sat with him. I did all the yawning and blinking and sitting that I could. 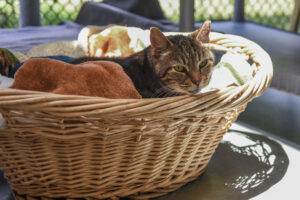 The reward was Wonton himself. It started with leaning into a neck scratch. It moved on to a raised tail and Wonton’s taking turns at contortions to get skritched in just the right spot. And, very recently, it turned into actual recognition — complete with eye contact — that a human was connected to the hands that made this beautiful, shy, feral kitty purr.

Wonton, then, became more than my teacher. He had already long been more than my assignment. When Wonton recognized me — truly, attentively — he became very much and very truly my cat. This is a thing that happens at Tabby’s Place. Usually, there are many people for whom a given cat becomes “my cat.”  Wonton’s chicken-heartedness, Wonton’s hiding, Wonton’s very nature was a limiting factor. 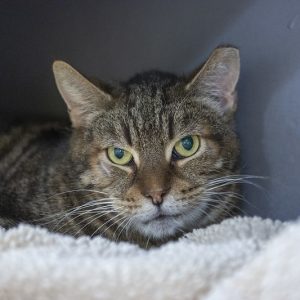 What I do know is that Wonton, unlike any other cat at Tabby’s Place, should have either a middle name or a hyphenated last name. He should share my name because, counting Wonton himself, there are exactly 5 reasons (with 5 tails, 20 paws, and 90 claws between them) why Wonton didn’t share my home. As for my heart, just as much as the other 4, he owns it still and always will.

Wonton LeFey Rosenberg, with all his fantastical, bold markings and shy, cautious ways was among the truest representatives of Tabby’s Place. Wonton was a cat who needed medical care, food, shelter. Wonton was a cat that easily could have been overlooked anywhere else. But, at Tabby’s Place he had a best feline friend, the best care that the best staff and volunteers could give, and he had at least one person whose cat he truly was.

Wonton, with his perpetually dirty paws and clipped ear marking him as feral, came so far during his time at Tabby’s Place that he will be forever missed, forever special, forever loved.