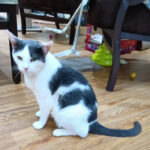 Decades before there were lollipops stuffed with bubble gum or chocolate taffy, an entrepreneur created square hard candies that were individually wrapped in cellophane. He called them Charms. This changed my life forever.

For my father’s mother, Charms were a little something to moisten her mouth, a little treat for a grandchild. For her, every single hard candy without a stick stuck in it was called a charm. Whether an actual Charms brand candy or another brand, a hard candy was her preferred little something sweet (aside from some terrific tea cookies). 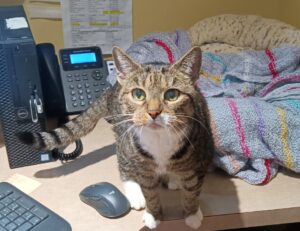 At Tabby’s Place, we are lucky to be graced with lots of charms, of the feline kind. Only one, though, is actually named Charm. This Charm is so charming and delightful, he would have knocked my grandmother’s socks off and changed everything she ever thought she knew about little sweet things.

Hips is not amused.

Tabby’s Place’s sweet little prince charming now resides in the Lobby, where his voice can join in with Grecca’s songs, and where he can swirl about every human leg that waltzes through.

Hips is not amused.

While Disco seems disaffected by Charm’s charms, and Valerie seems disinterested in his chants (kittens make for better viewing), and Anka…well, Anka is equally Anka-ish about every cat, Hips does not seem amused. Hips just might be a little put out. Hips might think Charm is actually the worst kind of cat…a copycat. 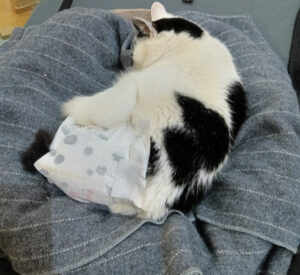 Who is a largely white cat with dashing patches of darker fur? Hips! …and Charm.

Who is a sweet cat who just loves people? Hips! …and Charm.

Who is a wonderful cat that was fairly recently relocated to the lobby? Hips! …and Charm…and also Rose, who expressly requested to be left out of this nonsense. Her routines, her preferences, and her sweetness are uniquely her own. Rose knows she is incomparable, and she’s happy to let the boys have the floor – for the moment. And, for the record, Rose might just be more endearing than even a cat so charming as to be named Charm.

Hips really is not amused by any of this. Furthermore, in this, Hips stands alone.

To clarify, Hips does a lot of sleeping, escaping, exploring, bounding, playing, and cuddling. Hips does very little standing, except as part of another activity.

Full disclosure: reality and my fanciful writing might diverge significantly. In fact, there is no reason to suspect anything specific at all between Hips and Charm. They barely know each other yet. Charm is still sussing out his new situation. Hips has already sussed his own situation and has settled in comfortably. The other cats in the Lobby have also gotten comfortable with their Lobby life. 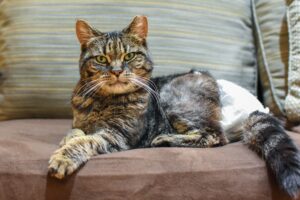 Each cat has their own preferred daily routine. For Boobalah, beyond the hopes of someone treating her to wand-toy time, there is always some cozy mini-cavern to cuddle up in. For Olive, there are always visitors to greet (She takes great personal responsibility for this, ensuring welcomes are proper and immediate!) and the ever-present hope of snacks. For Valerie, there is an oversized cat bed with an overfluffed blanket where she can snooze and snuggle with anyone who stops by with a friendly pat, and, of course those kittens in the Special Needs suite, who provide entrancing entertainment. 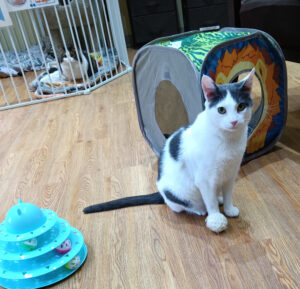 As he adjusts to the new space, Charm will also find his favorite spots and establish a routine. Just as the aroma of a sweet candy can permeate the air around the candy dish, Charm will have his own, unique impact on the cats who live in the Lobby, as well as on the staff, volunteers, and visitors who pass through.

Olive doesn’t worry that his greeting chirps will put her out of business. Disco is not concerned with him stepping on her toes as they dance around each other. Valerie is not concerned about him co-opting her favorite cushy blankets or window view. Anka will remain unconcerned as long as Charm remains a respectable distance from Anka’s personal area. 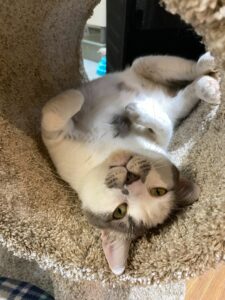 But, what of Hips?

There are few cats with the confidence and joie de vivre that are Hips’ to boast of.  It is entirely probable that he has sufficient self-assurance that no prince — and certainly no cat — could ever mute his boldness. In fact, given time, Hips might even come to appreciate the appeal of having a cat version of Mini-Me hanging around.

For the people who pass through the lobby, doubling the grey-and-white male cats with friendly natures will double the sweetness, double the cuteness, and most certainly will double the charm of spending time at Tabby’s Place.