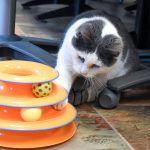 As soon as the lights go out the shenanigans begin. Ever notice? Sometimes, it’s just the silliness that comes with an unexpected power outage on a beautiful, clear day – something that puts a cog in the daily wheel and brings everything to a sudden, screeching halt, which sometimes, can be very welcome 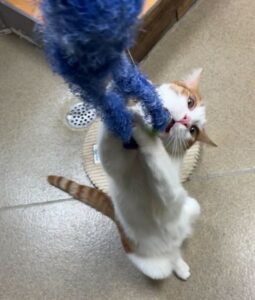 Often, though, it’s the stuff of ritual: lights go out (usually by virtue of a flipped switch or the sun setting) and, as stated, the shenanigans start… at least in my head… at least as I imagine things at Tabby’s Place.

The sanctuary is as cage-free as possible, with certain exceptions for medical, intake, and observation. Due to dietary or other constraints, certain cats are crated overnight. (These digs are comfy setups, as many as possible are soft-sided, and all are bedecked with blankets and toys as well as appropriate food, water, and litter depending on the individual cat’s needs.)

Then, there’s everybody else. 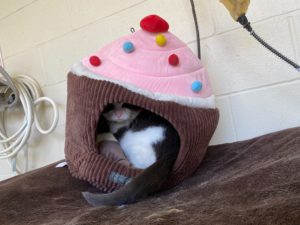 Of course, many of the prime suspects for pulling shenanigans against their crated suitemates would be a loosely formed coalition that I like to think of as The Fellowship of Meshuggenehs. It is entirely possible that Elliot delights in teasing Kozmo, more than a little, just as soon as the last car pulls out of the lot on any given day. It could be payback for the churned up ruckus and rumpus Kozmo helps create when he’s out and about during the day. 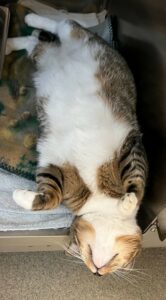 And, I’m betting that Wilbur takes a turn at getting the tiniest a bit of revenge, from a point of relative safety, against Alex for being so much, well, Alex every single waking second of every single day.

(NB: All parties heretofore mentioned are all leaders in the Fellowship. Daytime and nighttime shenanigans are among the qualifying factors for members.)

But what about some of the older, calmer residents? What of Pearl? With the opalescent orbs that are her eyes, there is no knowing what she might think to do once Ralph, S’mores, and other Community Room residents are zipped away in their private dorm rooms at night. I suspect she dances and twirls to beat the band, but that might just be my own brand of mental shenanigans.

(I’ve never claimed to be anything if not a little meshugge myself.) 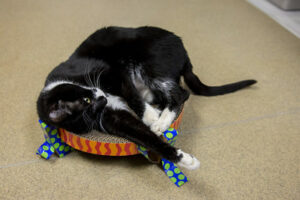 The truth is, we can never fully know what the cats get up to when there are no humans around to observe them. From what we do know of our feline friends, it is highly probable that most of them mostly fall asleep exhausted from a day overflowing with attention and admiration, once the lights are out. YAWN! BORING! 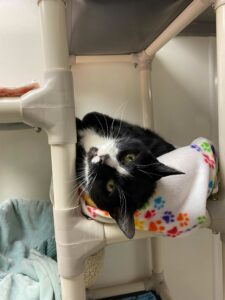 It’s much more fun to imagine a fully realized Fellowship of Meshuggenehs marching in a parade, coaxing all they pass to join in, and raising the roof as only cats can. No doubt they would lead a cat-cophonic rhapsody of joy and levity.

Either way, yaaaaawwwn or YAY, we will never be able to prove anything. (FYI, cats can do magic with webcams, in case you were thinking video would uncover what happens under the cover of night.) But, based on what I’ve witnessed in broad daylight at Tabby’s Place along with knowing the cats there, I believe wholly and completely that there are wonderful shenanigans galore bringing all the YAY!