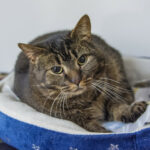 I’m going to let you in on a secret.

We’re all a bunch of miracles around here.

We are simultaneously a bunch of buffoons.

Ergo: it is high time to blow up the biggest, brightest balloons.

None less than the venerable Lizzo proposed the philosophical truism, “If I’m shining, everybody gonna shine.” (She also expounded, “Ya-ya-ee [ya-ya-ee], ya-ya-ee, ya-ya-ee, ya-ya-ee.” But this level of ontological complexity, exceeding Heidegger, is a bit much for this blog.)

“Shining” is, of course, a core competency of the feline species, exceeded only by “outshining.” Cats topple over one another in the Olympic sport of topping one another.

If Fenek perfects the art of becoming liquid in human laps, Baby will bust out his Most Blobbular Gentleman badge and elegantly demonstrate his ability to turn to gelatin under all circumstances (preferably the arms of a human dispensing herring, but the Babe is not too particular — haddock will do, too).

If Mishush makes mincemeat of every other creature’s attempt to be Most Adorable, Alvin* will employ all five pounds of his Jiminy Cricket self to chirp and cavort and cover his entire vole-sized body in catnip for your adoration. (Let the record show that Alvin fully intends “adoration” in the religious sense, shining glory-beast that he is. But then, all cats are monotheists given to glimpse Deity in every mirror and water bowl.)

If Oscar lands a contract with Pantene for his luxury locks, Roxy will court Prada to become the face of revolutionary design, culminating in a tortie-patch gown that Zendaya and Cate Blanchett will fight over who gets to wear to the Oscars.

If Elijah figures out how to hide sixteen cups of kibble in his knapsack, Rawlings will redouble his efforts to hoard one hundred Baconators in a single one of his cheeks.

There’s no denying it: cats compete.

But, far more than that, they co-conspire and collaborate and commiserate. And in so doing, they make each other better. (And in so typing, I have caused 100% of my feline readers to exit the chat. “Better” = “not perfect before” = “Angela is not right in the head.”)

Never have we been honored by two more valiant competitors than Mousy and Joshua. From their origin stories to their feats of valor, the boys took turns running a whisker ahead of one another.

Mousy had been best-friended by heroes like Hector and potatoheads like Pepperoni, happy to be their humble hype-man, only to lose each inamorata to adoption. Joshua had tasted the peak spiritual experience of sprinting out the door and down the hall, only to be hauled by hummus-brained humans back into his suite.

But all their agonies and achievements paled in the face of one great triumph: uncorking the universe’s jammy jelly jar of love. 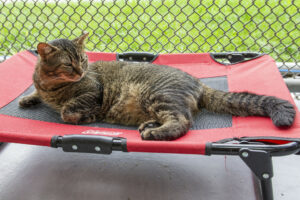 Mousy had mastered the mystical art of snuggling himself into oneness with human beings. Joshua had done the same. They were the Thomas Merton and Thich Nhat Hanh of Suite C, except their view of transcendence was suspiciously indistinguishable from a waterfall of cheese. (I suppose monasticism comes in many flavors, including Monterey Jack.)

If they were stuck in New Jersey, they were going to get to business setting up sparklers that could be seen from Bayonne to Barnegat Light.

And along the way, they raised each other’s gleaming game. 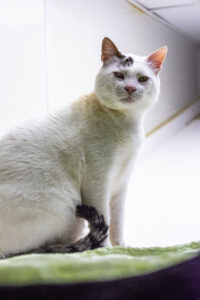 As infinite as Mousy and Joshua’s respective egos were, they made room in their confidence-caverns for one another. Mousy, ever a gifted admirer of others (cats, humans, three-toed frogs, senators, etc.), was probably the inaugural president of their Mutual Admiration Society, but Joshua jumped in with all four feet, plus his considerable tail (which, it is rumored, reaches from Bayonne to Barnegat Light).

No human witnessed the conversation, but Wilbur filed a report suggesting it went like this: 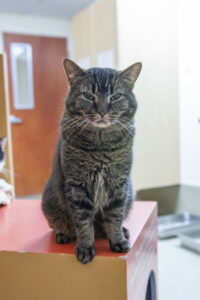 Clearly we were dealing with two of the largest-hearted individuals this side of the Dalai Lama.

And when your heart is big enough to let someone else be amazing, it’s only a matter of time before you reach nirvana. By which, of course, I mean “get adopted.”

The Brothers Amazing are now brothers in fact, filling one fortunate forever home with music and magic and mutual admiration. Their miraculous buffoonery has just begun, and everyone involved is shining brighter than ever before.

Blow up the balloons. Hand out the glow sticks. And remember: the best way to shimmer is to shine your light on your amazing neighbors.

*Forever loved, on which more in a moment…may he cavort in heavenly peace.

Forever loved, forever full: Alvin
Do it for the kitten
Guest post: on Felis Catus
Repudiated or combobulated
Guest post: The weight of the matter