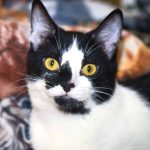 Summer is serious business. Its questions are timeless:

Whatever happened to Frozfruit?
Will the song of the summer be “Juice,” “Sucker” or “Old Town Road”?
Where have all the kittens gone?

I’m still struggling with the first two, but I can answer #3 with joy: they have all been adopted, all of them, and promptly replaced by new kittens, who require your immediate attention and adoption.

It is, after all, Catmas in July.

But I’m getting ahead of myself. Let’s jump for June:

Promoted to the Community Room: Nina

Promoted to the Lobby: Dani

Stuff we learned: The Lobby is a finite forum, incapable of containing infinite greatness. Attempting to place both Nina and Dani in a limited, earthbound space was simply too much magic for however-many square feet to manage. So, rather than let the Lobby collapse like a neutron star, we moved Nina into the Community Room. Grandeur properly distributed; universe saved from certain doom; Tabby’s Place gets things done.

And, while we’re at it, let’s jump for June, too. Summer on, my little sparklers.