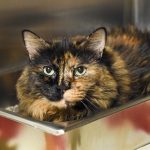 It would not interest you why I was Googling “weird Cajun expressions.”

True fact: this was related to a certain Executive Director of my acquaintance who shall remain unnamed to protect the strange, but whose name rhymes with “Ronathan.”

At any rate, I trust it will interest you to know that one such expression is “Lache pas la patate.”

I could end this post right here and feel good that I’d given you sufficient food for today. But being a generous sort of dunderhead, I will continue.

It is rarely advisable to let go of any potato in any context. But, in Cajun parlance, this magical phrase essentially means “don’t give up.”

Isn’t that grand?
Have we ever needed to hold more tightly to our potatoes than right now?
Have you ever met a single cat who let go of his potato?
I didn’t think so.

But even in a species that clings proudly to its tubers, there are standouts. Cotton and Rose come to mind (all the more given that they have lately become potato pals). Luna is an obvious example, with eyes bigger than titanic taters. Bucca is a tenacious potato-clinger, nineteen years and counting.

And then there are the two hairiest potatoes in Ringoes. (If that mental image isn’t enough to make you go low-carb, I don’t know what is.)

First came Roxy, a living lump of lagniappe. Roxy is so extra, her fur speaks in Bayou music, lush and spectrum-spanning and enough to make you drop your beignet (if not, I hope, your potato). But overshadowing her Carnival Queen beauty is Roxy’s inner elegance, a glorious gumbo of kindness and gentle manners, all wrapped up in a cuddle-hunger big enough to sink a barge.

Roxy is, in every way, worth holding onto. Forever.
But Roxy was dropped like a hot potato.

The same is true of her comrade in coiffure, the magnificently maned Oscar. Never was a muffaletta so scrumptious, nor a Zydeco anthem so righteous, as this loving, lolling, soul-feeding specimen of a cat. His eyes will swallow you, potato and all, and you won’t regret it for a moment, as you two-step hopelessly into love and joie de vivre.

No one should have put Oscar down. For goodness sake, put down the friggin’ potato before you do that.
But that’s exactly what someone almost did. 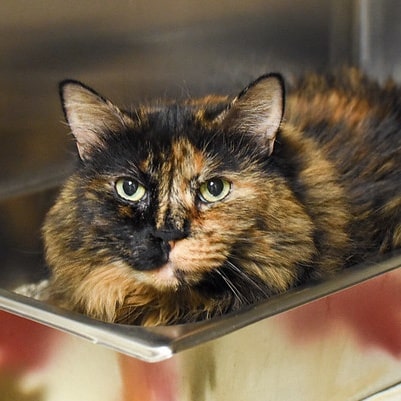 In both cases, someone scanned Roxy and Oscar’s story, circumstances, and bathroom habits, and they made a choice. And so these two most precious, profoundly hairy, infinitely valuable potatoes were left behind.

Both Roxy and Oscar are victims of the worst possible reputation for a cat: inappropriate elimination. Once you utter those two words, prepare for adopters to stampede out of your sight as though someone had just yelled “FIRE!” or announced that the Annual Flatulence Convention was about to begin.

It’s one of the most common reasons that cats are put down, put aside, put out of sight and out of the reach of love. Accordingly, it’s not an uncommon reason for cats to float into our particular bayou.

And that’s where the music, the dancing, and the tenacious potato-holding take over. 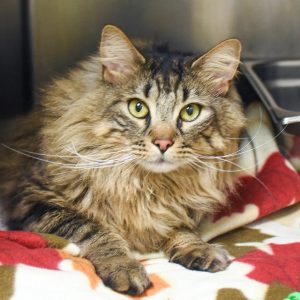 To meet Roxy or Oscar, you would never guess that they had been weighed and measured and found wanting. No; they are done with the past in all its sadness, and they enter the present with potatoes fully in hand.

Give up? Never.
Give in? Pauvre bête, don’t be silly.
Hold on, trusting that they’ll always be held? Now you’re talking, my little patates. Move your potato to the bagging area.

The future may or may not bring adoption for these two. We’ve adored enough “inappropriate eliminators” to know that, sometimes, that label simply sticks too hard. But even in the worst case, laissez les bons temps rouler. The music is playing; the love is loud; and never again will Roxy or Oscar find themselves floating like Acadian driftwood.*

You can always hold on to your potato when you know you’re held.

*A song that made me cry as a child, much like The Wreck of the Edmund Fitzgerald. Someone needs to start a support group for all of us children whose parents schooled us in Folk Songs About Terrible Events. But at least we also got to look forward to a Stoned Soul Picnic, even if I still have no idea what that is.

angela is not right in the head covid-19 oscar roxy

1 thought on “Don’t let go of the potato”