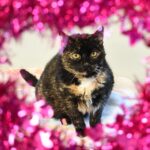 Cats undoubtedly have their concerns: plant-based sausage, the pleasures and pitfalls of nostalgia, the diminishing likelihood of a One Direction reunion.

But, by and large, small or large, they are not a species prone to worry.

They are, accordingly, a species poised to save us from ourselves. 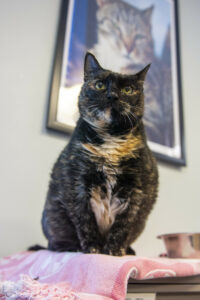 The world waxes worrisome on a wearying basis. Countries clash like billy goats; supply chains and chains of command and the chains that bind generations all get tangled; we forget who we are, and try on gaudy costumes of who we aren’t, and end up exasperated in our separate corners.

All along, we have a different option.

Call it the Consetta Concession.

As of this writing, Consetta’s Community Room could be construed as a world of worry.

You have an actual gangster leering at everything feline, proudly proclaiming, “Frank Sinatra was not the only blue-eyed Frankie convicted on charges of seduction!” (The fact that he has recently gone viral, all the way to Newsweek, has not helped to subdue his ego.)

You have a bran-muffin of a Jeannie dreaming of something like sedition: “I am the apparent Responsible Choice. I am the Adult in the Room. I AM EMPIRE AND I SHALL END ALL PRETENDERS TO THE THRONE. Also, I hope you’re getting enough riboflavin these days. Would you please eat a banana for your Gramma Jeannie? AND SUBMIT TO MY SPLENDOR.” 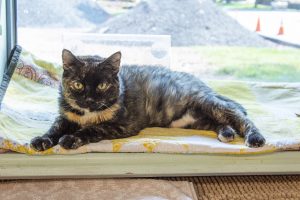 You have the blind leading the paraplegic, the batty battering crinkle balls into places crinkle balls ought not land, a swooning spitoon full of sizzle and vinegar, and a hinky hoard of human beings attempting to shepherd the whole spattered situation with some measure of decorum.

Fortunately, you also have a competent shepherd, if you’re willing to accept her as your superior.

Consetta, as longtime readers will recall, came to Tabby’s Place unspayed and unsweatered, a shaven specklefest of tortoiseshell attitude. She was lean and hungry, all eyes and expectation. And, being a cat, she made certain her expectations would be fulfilled.

And so they were.

Consetta came to our Community Room with little more than a bindlestiff of bad memories — New York City at its most unpitying; Grecca doing some combination of Gregorian Chant and Taylor Swift karaoke the entire ride to Jersey — but not even a half-inch scrap of “worry” could be found therein. (Half-eaten Chapstick, ticket stub to a Billy Joel tribute band called The Prosciutto Man, and skull-covered scrunchy, yes; “existential angst,” no.)

She knew — cats always know — that she would come into her own. 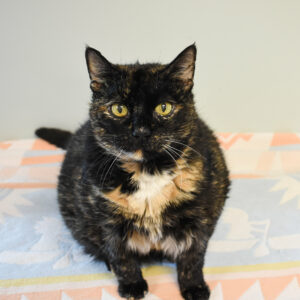 She trusted — cats are masters of faith, if only in themselves — that her queendom would have no end.

She lived to see the day it all came true.

This is not to say that Consetta’s coronation has come without claptrap. She has battled diarrhea and ringworm; she has found herself in the position of having to deliver beatdowns and State of the Consetta Room addresses; she has been ingloriously “butt-bathed” and inexplicably under-admired by adopters daring to adopt cats not named Consetta.

But in the face of stuff that would shrink smaller spirits, Consetta has grown.

Consetta has also grown. But, as you might expect, our imperial cosmonaut of a tricolor cat has not grown concerned. When she contemplates the fact that she is approaching the size of an actual airbus, her face turns all beatific: “I’ve seen My Neighbor Totoro. My plan is coming to fruition. Now bring forth more fruit, peasants, by which I mean prosciutto.”

We don’t know what chaos may lay claim to Consetta’s future. She may grow so large, New Jersey will have to create an additional area code for her personal coverage area. Her irritating medical issues may flame forth into something of actual concern. She may ram head-first into any number of unimaginable Actual Concerns. 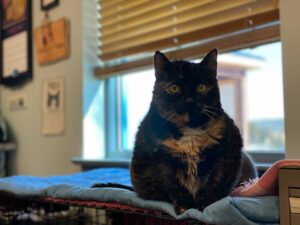 But unlike us, she’s not wasting an hour attempting to imagine them.

She has chosen the better part.

She’s made her concession to the questions without answers, choosing instead to park her person at the concession stand of Today, where piping-hot hope is served up in an endless array of red-and-white trays. (Let the record show that Concetta could prefer “hot dogs” to “hope,” but she’s a gracious potentate, capable of considerable concessions to ratty little “reality.”)

She’s saving the day by savoring the day, snorting at the thought of a future adoption-and-return, or a red flag on her tax returns, or whether or not her birthday will be appropriately acknowledged with many happy returns (which is to say cured pork products numbering no fewer than twelve).

She’s enormous, planetary, a creature you could rightly call “considerable,” precisely because she has considered the weight of the world and opted to travel light. This is precisely what enables her to be a bright light in the Community Room, and in the caverns of our hearts.

When you ward off worry, you have time to be a torchbearer. 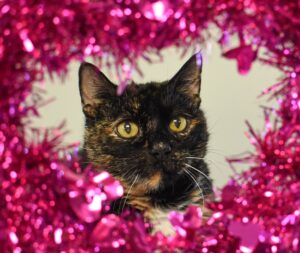 When you delight in the “is” and deflect the “what if,” you can heal the hapless.

And if you want anything approaching a life in full, you’d best belly up to the buffet of today’s bliss, today’s bacon, today’s belly rubs and bounties. You’ll be all the better able to handle bagel-brained bounty hunters like Frankie, and darting dolts like Dani, and questionable test results, and undefined relationships, and love stories that seem to trail off in ellipses rather than exclamation points.

Tomorrow, I have it on unimpeachable authority, will have trouble and glitter enough for itself. Today, and one three-ton cat, need us here.

Let’s plan for the best and plunk ourselves down in this slim, shining hour. And if we’re lucky, we’ll find a cat the size of a paprika-and-pepper zeppelin in our laps.