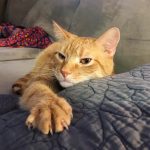 Has it really been five whole months since I last regaled you with tales of my personal lion king, Simba?

I’m happy to say that part of this absence is due to Simba’s life having become blissfully normal.  (The other part is because I’m as flaky as a Toaster Strudel.)

Simba and Peggy remain great friends, and even Dottie has come to accept him, though she isn’t quite shopping for matching BFF collars.  Simba has settled into family life beautifully and still seems to be perpetually ready to belt out “I Think I’m Gonna Like It Here!” Like another once orphaned redhead who found the home of her dreams. (Sometimes he might be belting that, actually. My sweet boy is very very loud.) 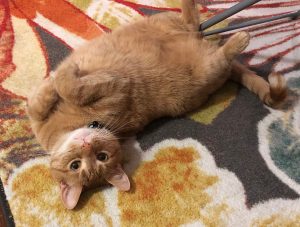 And now that Simba has firmly and truly made himself at home, he’s decided that he is the undisputed Man of the House.

Have I mentioned my husband?

Over the past few months, our house has been the staging ground for a struggle of wills.  Husband Dan, biped with thumbs and a Ph.D. and sure that this makes him the alpha, versus Simba, who is a king, and does not understand what about that this big weirdo doesn’t understand. 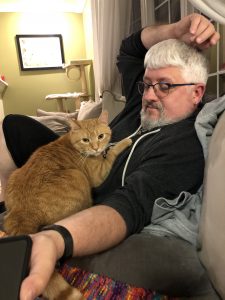 This turf war has only been exacerbated by Dan’s recent change of jobs, as he now works from the home office, which also serves as Simba’s overnight room.  (Simba does still go into his own room at night.  These days, it’s only because his boisterous head butts and demands for pets mean that I would never sleep otherwise, and he enjoys his bedtime ritual, so I see no need to fix what isn’t broken.) Simba doesn’t appreciate being woken up early in the morning by some interloper who wants to do awful things like turning on the lights and making conference calls.

And while he could easily go nap anywhere else in the house, Simba prefers to state his displeasure to the human invader.  Loudly.  And constantly.  Dan’s workday has become a routine of being followed around and told off by a large orange cat.  Fortunately, this is the extent of Simba’s resistance, and Simba absolutely loves Dan.  He adores playing with the strings on Dan’s hoodies and cuddling with him on the sofa.  He just also thinks it’s very important that Dan knows Who Is In Charge. 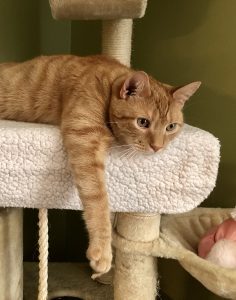 Speaking of that sofa…it’s the second front in our war of wills.  Remember how, at Tabby’s Place, Simba had his special spot atop the crates?  In our house, he has many special spots.  He likes the middle tier of the biggest tower, his big dog bed in his room, whatever clothes I may have laid out on the bed… and the spot where Dan usually sits on the sofa.

He’s happy to cuddle with Dan or snooze on my chest.  But the second Dan gets up, even to get a glass of water?  Simba is in that coveted spot faster than you can say “fives!”  Lion kings respect no call of “fives,” apparently.  So a few times every night, Simba settles in, only to be shooed out of what is apparently the only comfortable spot on a very large couch.  Then he pouts for a few minutes before hopping back up to cuddle some more.

It’s a mostly hilarious battle for dominance.  Simba loves it here and loves every single member of this family (even if Dottie’s reciprocity only extends to mildly irritated tolerance).  He’s an affectionate, happy, yowling ball of fur and silliness.

And if only the male biped would accept him as the one true king, everything would be just about perfect.