Cats, unlike humans, are not bound by the rules of etiquette and can just tell off anybody they don’t like, leaving no need for wishes of turned ankles.

And that brings us to Dottie.

In previous tales of Simba’s times at home I’ve told you about his new BFF Peggy, but I haven’t had much occasion to explain the enigma that is Dottie.

Dottie is one of those cats who, regardless of size, will always and forever look like a kitten.  She has big, round eyes and a sweet little nose.  This appearance belies the complicated creature underneath.

Dottie is a study in contrasts.  She can be silly and affectionate, or so aloof that she makes you feel guilty for annoying her by existing in her vicinity.  Approach Dottie, and you’re as likely to be met with a curious sniffing as with a glare that would wither fruit on the vine.

My husband has a theory that she has a dual personality: Dottie is sweet and playful; Dorothy hates everyone and would just like wet food and for everyone to leave her alone and be quiet.

Dottie is really my husband’s cat.  She (mostly) puts up with me, but she adores my husband.  (I am most popular with Dottie when I indulge my love of apple turnovers, as she enjoys finishing off my crumbs of puff pastry.)  She of course loves her sister Peggy, even if Peggy licks her face too much for her liking.  But beyond those two – and occasionally me – she’s not interested in making friends.

It’s Dottie’s world, and we’re all just living in it, sometimes to her consternation.

And Dottie does not enjoy Simba invading her world.

At the start, she refused to be in any room with him.  For a while she took up a self-imposed exile in the basement.  Now she’s back to existing among the rest of us, but she makes sure we all know just how much of an inconvenience this big orange interloper is.  Given her kitten face and never-ever violent nature, we are often surprised at just how well Dottie communicates her displeasure just using glares and growls. 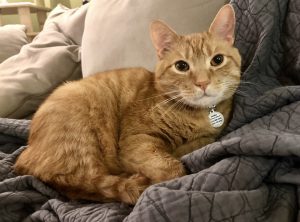 And Simba?  He desperately wants to be friends.  Having discovered the wonders of feline friendship with Peggy, he wants to expand his horizons.  Once in a great while, Dottie will fall for his invitation to chase or pounce him, only to suddenly remember herself (or for Dorothy to take over, says my husband) and grumpily stalk away.

Simba is confounded.  No matter how many times he shows her his impressive belly or jaunts playfully up to her, Dottie remains unimpressed.  Of course, we tell him that it’s a good sign that she doesn’t hiss at him anymore, and that she’s just very stubborn, and that maybe stealing treats from her isn’t the best way to make friends, and he does his best to oblige.

But Simba is still learning how to exist peacefully among other cats.  Sometimes he stumbles. Sometimes he just gets over excited and runs them off with his boisterousness. (His habit of greeting either of the girls with a loud yowl continues to confuse them.  Peggy mainly stares in confusion.  Dottie replies with scorning chipmunk chitters.) 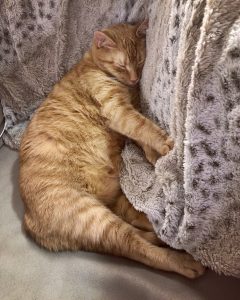 And so, we all currently exist in this elaborate dance, where Dottie is beginning, against her best efforts, to accept Simba, and is really surly about it.  And Simba just keeps on trying.

But progress, however slow, is still progress.  Nobody is hiding from one another or refusing to eat or to play, and Simba continues to astound us with his ever-growing joy.  And though it’s slower than he’d probably like, his charm offensive is paying off.

Simba will be home one year this July.  I’m increasingly optimistic that, by then, all three cats will be living in harmony, which is pretty amazing, since when we first brought him home, we thought he would always need his own room.

In the meantime…we’re keeping an eye on everyone’s ankles, just in case Simba is any part Irish.