Donate
The Idris and the glory 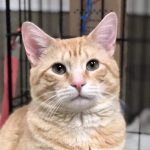 Matlock is a magnet for Idris.

Matlock has unlocked Idris’s joy-vault. That’s a good thing, because no lesser being than our favorite weirdo could summon Idris’s spark.

He may look like a flamin’ hot Dorito, but Idris pales in the face of his foes. That’s a shame, because Idris’s only foes are the trembly voices in his head, telling him the world is not a safe place. That goes double for Suite B (which is admittedly not a sane place, but it is no less safe for being happily unhinged).

To make matters worse, Idris’ green eyes are blind to his power. Idris is exquisitely adorable, possessed of superhero sweetness; he’s a heart-hero of Hulk proportions, with a soul stronger than Thor’s hammer; he shares his name with one of the coolest human beings ever to walk this earth. But no one gave him the memo that he’s a glorious being.

No, that’s not quite accurate. All of the humanbeans in three counties have given him that memo, repeatedly. We mush him and we smoosh him, we head-bonk him and we belly-rub him, we cuddle him and we sing at him and we take too many pictures of him, all in the name of singing back an old, true song he has forgotten.

Idris does not feel his glory.
At least, he didn’t.

Sometimes it takes an excruciatingly honest friend to make you see yourself. You know what I mean: this is the brave bonehead who will tell you when your breath smells like brussels sprouts, or your jokes are making his eyebrow twitch, or your thesis needs revision. This is also the friend who will tell you — albeit sparingly — that your earrings are fierce, or your essay is exquisite, or your kindness is your greatest strength…and you will believe him, because he is nothing if he is not true.

Matlock is that friend.

Matlock is not one for honey-drenching the truth. If he doesn’t dig you, he will let you know, with color and claws and chaos. This has earned him the distinction of being one of our orange-collared cats, too truth-telling not to warn people from a distance that the truth can cut.

But Matlock is also a true friend, one who loves for life and beyond walls. Case in point: he has been visibly pining for his best bro ever since the cheese slipped off Tabby’s Place’s cracker. Matlock’s soul brother Cheddar was adopted back in May 2018, and Matlock’s merriment has never returned to its peak-cheese levels.

At least, it hadn’t.

Matlock is painfully choosy when it comes to chumming around, but when he met Idris, he saw the obvious: this was a guy full of glory. In a flash, a new best friendship was born, and flashes of orange frolicked through Suite B all day long. As he ran and romped and relished Matlock’s attention, Idris awoke to the most obvious thing in the world: he is a glorious being.

We don’t think it will take an adopter very long to see the truth about Idris. But for now, we’re just thrilled that he sees and feels and runs free in his own worth. May we all be unlocked by such a friend.

1 thought on “The Idris and the glory”