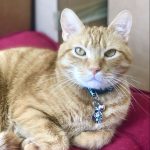 It’s been too long. 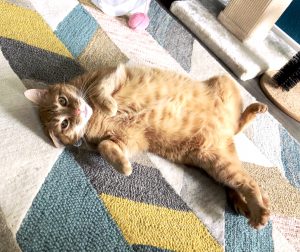 As I mentioned in my last post for this blog, in January my husband and I and our three feline babies moved to Colorado.  Since then we’ve been busy setting up house, getting settled, and learning our new city (that last one is on hold for the time being for obvious reasons). And so I’ve been remiss in updating you about Simba and his continuing adventures.

And what adventures they have been! In case you’ve never driven three cats from New Jersey to Colorado,  I can tell you that it’s a singular experience.  We did our best to ensure their comfort for what would be three nine-hour days in the car: large carriers with room for a litter box, food and water fitted carefully into a rented SUV with the few things we didn’t send ahead with the movers. 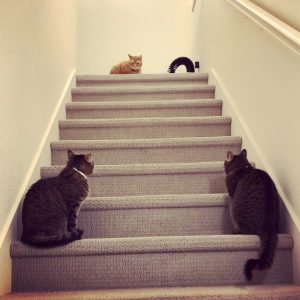 Peggy and Dottie shared one carrier, since they’re bonded and have never been apart; Simba got his own.  We stocked up on calming herbal treats and calming supplements for their food and extra blankets, and we made sure to have their favorite toys on hand. And then, we crossed our fingers.

For his part, Simba was a champ! He yowled at us a bit when we first hit the road but quickly adapted and slept most of the trip.  Poor scaredy-cat Dottie mostly curled up in as tiny a ball as she could manage and waited for it to be over.

And then there was Peggy.

Peggy dislikes being confined. Even short trips to the vet are met with Peggy singing laments for freedom and trying to burrow out of the carrier.  Three days in the car?  Peggy sang.  She yowled.  She murdered a hat my husband left within her reach.  She tried to dig out of the crate.  She reached out to bap Simba’s carrier.  She crawled all over her poor scared sister. On our last day, she got on Simba’s last nerve:

On our second night, after we bedded down in that night’s hotel, Peggy peed in our suitcase – thank goodness for hotel laundry rooms! 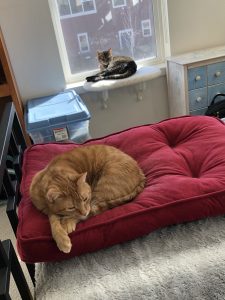 But we made it, and before too long, all three cats were happily settled into their new kingdom.

Being in a new house has done wonders for Simba-Peggy-Dottie relations!  The old house was the girls’ turf, into which Simba was an interloper.  But the new house is neutral ground.  Thanks to this blank slate, Simba has been more confident, and the girls have been more accommodating.

Simba and Peggy, already friends, have begun experimenting with sharing personal space.  Peggy will let Simba sniff her face, and they happily stampede up and down the stairs all day and night.  They exchange occasional nose boops.  I often wake up to find Simba curled up at my feet and Peggy snoozing next to me, which was unheard of a few months ago. 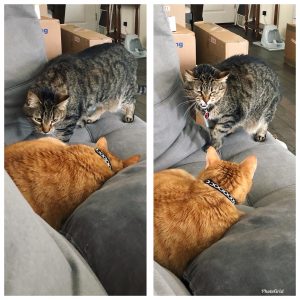 And even stubborn Dottie is starting to thaw…slowly.  She’s more open to playing with and around Simba now, but Dottie was into social distancing long before it was cool and will still tell him off if he gets too close.  Of course, she also likes to creep up and sniff him while he’s sleeping, only to hiss at him and skitter away when he wakes up.  Dottie is a complicated girl.

But Simba remains patient and vigilant.  He shows her his belly.  He gives her space.  And occasionally he pounces as she walks by…everything is a process!

One weird habit Simba has developed in our new home: he hates it when we’re in the kitchen.  If either my husband or I goes in the kitchen, he follows us around and howls and yowls his protest until we settle somewhere else.  This makes cooking meals a delight, with the dulcet tones of a big orange cat telling us off:

We suspect his objection is that we’re standing up at all – Simba is a cuddler, and he lives every day just waiting for one of us to settle down somewhere so he can hop up and sprawl himself across our chests and purr until those purrs give way to snores. 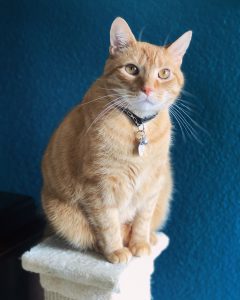 I still remark all the time that I can’t believe Simba is the same cat that I took home from Tabby’s Place.  He fits in so well with our quirky girls these days, and he’s just the happiest, friendliest fella.  He’s also the only one of the three cats in this household who isn’t at all sick of the humans being home all the time during these strange days of isolation.  Peggy and Dottie are a bit over the constant attention and will disappear to nap away from us, but not Simba!  He wants to be wherever we are.

We’re living in strange times.  But seeing Simba continue to blossom and all three cats becoming a real family is a constant joy. 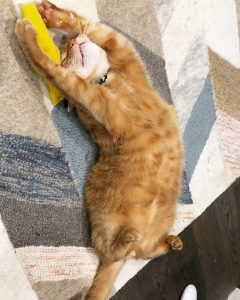