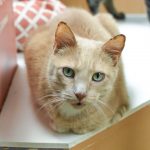 I must renounce and repudiate one of my earlier statements.

I am now convinced that we are, in fact, living out the Book of Revelation.

It wasn’t even the giant cloud of Saharan sand that grumbled across the Atlantic into our yards, which was apparently altogether okie-dokie. (Actual headline: “Sahara Desert dust could make our sunsets red.” We’ll try to cope.)

No, my realization that These Are The End Times came from a source far more significant: Bobby of the Lobby.

Where we last left him, our intrepid turmeric-toned senior had just moved into the Tabby’s Place Lobby. This was reason for simultaneous hope/joy and fear/trembling.

On one hand, Bobby is a hope-full bundle of elderly joy. If you should even hint in the direction of affection, his endless eyes will light up, all green-means-go and Bobby-means-business. To have him in the Lobby would mean to give him more constant access to human huggitude. Hope and joy indeed.

As shy as Bobby isn’t about his affection for humanity, he’s even louder when it comes to his loathing for cats. Big cats. Little cats. Fellow olds. Infuriating younguns. Republicans. Democats. Any cats who dare to be cats offend Bobby’s (enormous) sense of propriety. (Think Mr. Carson from Downton Abbey, only prone to violence if someone should decant the Bordeaux inelegantly.)

Nor was it enough for our starchy old gent to see a feline fiend and simply make haste in the opposite direction. Bobby, despite looking like a cross between Niles from Frasier and a stick bug, was ready for Sumo. Except, whereas real Sumo wrestlers fight with honor and dignity, Bobby simply wants to Kill All The Cats Dead.

Could such a complex character grow into the role of Bobby of the Lobby? Could we even dare to beleive that our huggable old misanthrope would tolerate the likes of Twister and Rose and Anka and Olive?

Here we find the surely-these-are-the-end-times revelation. Bobby, with his checkered past and his desire to check all other cats out of the Hotel Tabby, did just fine.

There was peace in the valley.
There was mercy for the obnoxious (read: all of felinity).
There was one very satisfied, serene Bobby of the Lobby.

Surely he is the first horseman of…well, hopefully not that, but something significant. Come to think of it, I retract my retraction. These aren’t the end times, but they are times to end our doubts.

Surely, in the year that disappeared the murder hornets and made us all babies together, anything is possible.

Even — especially — for Bobby-of-the-Lobby types.