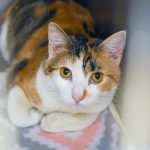 When you were a kid, did you think “getting trapped in quicksand” was something you’d realistically have to worry about throughout your life?

Me, too. (Thanks a lot, Saturday morning cartoons.) Turns out we were right…but who knew the quicksand would be metaphorical?

Since the beginning of This Difficult Time, we’ve felt a little stuck in quicksand. Instead of our usual rushing river of rescues and adoptions, intakes and homegoings, we’ve been at a trickle, slowed down by circumstances like blueberries trying to roll through old oatmeal.

So it’s no secret that our Epilogues contain less action than under ordinary circumstances. There’s less coming, going, and moving about.

So, dear muted May, we salute you, and every nubbin of news you gave us. Let’s go:

Promoted to the Lobby: Bobby (hereafter to be addressed exclusively as Bobby of the Lobby, Mighty Man of Valor)

Here’s to climbing out, leg by tail by whisker, and racing through the oatmeal of June. Onward, kittens.