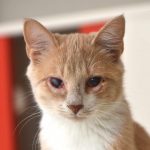 And now, we shall April.

It’s undeniable spring now, the time when we’re all fools unless we’re too wise to be any fun. The earth itself is so excited it’s erupting in crazy colors everywhere, and winged things are yelling their glee for us.

But before we double-handspring straight into spring, let’s bear witness to the last wisps of winter:

Banished to Ringworm: NOOOOOO ONE.

Promoted to the Lobby: Cheela and his EXTREMELY LOUD VOICE OF EPIC POWER

So get out there, springy ones. Prove our buddy T.S. Eliot wrong. Our cats (jellicle and otherwise) wouldn’t have it any other way.