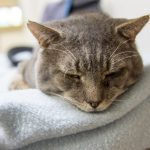 The answer will be revealing.

If you say “giant-headed FIV+ cat,” I’ll know that you are:

If you say “Guthrie,” I’ll know that you are:

Arlo Guthrie, for those of you in Group 1, was the son of Woody Guthrie (the folk singer and world-changer who was more awesome than all the ice cream stands in all the lands, and if you don’t know him I want you to stop reading this blog and go listen to This Land is Your Land right now).

He was actually a little before my time (see what my ego did there?), but growing up in a home filled with folk music, there was no escaping Guthries of any generation. Arlo only had approximately two songs that anyone ever noticed, but they were noticeable enough that he’s inspired the names of two Tabby’s Place cats. Which brings us to the current giant-headed resident of Suite FIV.

Arlo Rosenberg is a singer of sorts, too. He sings with his spectacular head, arguably the largest we’ve ever seen in person at Tabby’s Place, including those of humans. Before you formally introduce yourself, Arlo’s enormous noggin has already scream-sang “GOOD MORNIN’ AMERICA HOW ARE YA!” Next thing you know, you and Arlo have hopped onto the everlasting train car of friendship, riding the rails as he rubs his heroic head against every inch of your being.

New Jersey’s native son hasn’t always been a happy slab of tab, though. From the streets of Paterson to a foster home, Arlo seemed to be moving up in life. But despite his dinosaur size and a voice big enough to shake Alice’s Restaurant, Arlo found himself on the wrong side of the tracks even indoors. Unneutered as he was, he “should” have been filled with warrior-cat testosterone. But with the foster family’s other cats, Arlo was Thomas the Tank Engine among Bugattis with teeth.

At least, that was the story Arlo sang. Forgive us for being skeptical. On the basis of his head and his hunkiness and his attitude, we just couldn’t picture this mega-cat getting clobbered. He was larger than three conductors and twenty-five sacks of mail. He’d survived an ear mite infection so epic, his neck and head skin was now permanently something like chain mail. And, even post-neuter, Arlo’s early days in Suite FIV seemed to suggest he was mightier than his tall tales could tell.

But Arlo wasn’t done singing. And today, the tattletale with the giant head and the niftiest namesake is naming names.

It’s almost too embarrassing to tell, but Arlo adores the pity. So here goes.

After Arlo himself, the newest additions to Suite FIV were two sweet, mild-mannered poofs of black puffball sweetness, Jake and JJ. One was terrified of everything from hair to BTS; the other was goofy-confident, with one good eye and one gigantic heart of love. After all the angst and agita and downright warfare we’ve seen in Suite FIV, we were grateful to introduce such gentle gents, sure they would play nice.

We are now sure that we are dunderheads. (Some lessons keep presenting themselves until you get ’em.)

The scene went like this. Jake saw something he wanted — a lap, or a purple mouse, or a random scrambled egg. Arlo, in his lazy loping stride, was in the way. Ergo, Arlo could not be permitted to live.

Jake instantly became a very different sort of puffball, his wispy hairs now barbed wire, eye wild, teeth gnashing. Arlo did the manly thing and attempted to run. But before his train could leave the station, Jake had him…by the tuckus.

Arlo told us the whole tale, lower lip blubbering and shaky paws pointing right at his perp. But even if he hadn’t, his heinie would have sung. Like the great Dusty before him, Arlo now bears the unmistakable scars of an inglorious defeat.

Puncture wounds on his posterior.

At the time of this post, Arlo’s recovering comfortably in our Hospital. But, suffice to say we’ve learned a few lessons here:

(1) Never overestimate the ferocity behind a gigantic head
(2) Never underestimate a one-eyed cat who looks like a black dandelion
(3) Always assume that Suite FIV will find, create, or embody chaos. Always.

Until we get those truths down, buckle up, my favorite folkies. These wildcats feel the wheels rumbling ‘neath the floor.