I do not regret to inform you that things are not getting worse.

I repeat: the situation is not deteriorating rapidly. Kids these days are not kidnapping all that is good and right.

All of us kids are going to be alright.

At Tabby’s Place, we never tire of a certain phenomenon. Throw a half-dozen kittens into the same room, and they will instantly — we’re talking in the time it takes to conceive an idea or a hunger pang or a creature — become best friends.

Adult cats are a surlier story.

While there are exceptions (exhibit A: Mishush), the average adult cat considers the average kitten to be an offensive example of wasting time.

Disco is the gal whose dance card is so full, there’s simply no time for fooling about. This is not to say that our snoozy-eyed, lumbering tabby makes haste — it would be more accurate to report that she makes her way through this world as though walking through paste — but she has her own schedule, her own priorities, her own secret inner calendar of events.

Sitting on the floor and playing with Legos does not figure into that planner.

“Sitting on the floor and playing with Legos” is kittens’ collective core competency, metaphorically speaking. (Although, hand Armadillo and Rodeo some literal primary-colored blocks with round shnubbins on the top, and I suspect they’d have a literal grand old time.)

You see the problem here.

Disco has the simultaneous honor and dishonor of living in the Tabby’s Place Lobby, which means her exposure to kittens is as inescapable as your exposure to Vin Diesel’s filmography, Bed Bath and Beyond coupons, and the moody sky over your head.

Kittens live in the Kitten Room (we are savants of creativity in the naming of rooms); the Kitten Room has a floor-to-ceiling glass window; and Disco just can’t two-step away.

Literal report from our behavior log: “Disco was unsuccessful in her attempt to attack the kittens through the glass.”

But before we come down too hard on our frazzled dancer, much less call her curmudgeonly, let us recall the steps that have led one Disco Rosenberg to this particular light-up floor. 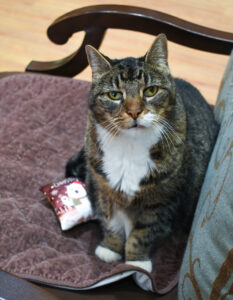 She languished in a crowded shelter.
She landed in the perpetual middle-school dance that is Tabby’s Place, complete with the guy in the corner who earnestly believes he is the cosmopolitan debonair answer to every cat’s dreams (Bellamy, beat-boxing a demented version of “Fireball“); the shy guy who really is the cosmopolitan debonair answer to every cat except Disco’s dreams (Flash, who is the scientifically verified opposite of a fireball); and the mischief-beast who just wants to get everyone jumping (Anka, whistling “Strangers in the Night” through his nose).
She was asked to dance. (Not by Flash.)
She accepted.
But no sooner had she found her footing in a home intended to be forever…than she was back on the yellow bus to the world’s most madcap middle school.

The “Adopted And Returned” stamp isn’t an accessory any cat wants to add to her leisure suit, and at age 10+, Disco simply didn’t have time for this.

Or hugs. (Shnoogler beware.)
Or tomfoolery. (Bellamy beware.)
Or, perhaps most of all, kittens.

When the mirrorball keeps turning and time keeps tangling your tiny string-lights of hope, it’s easy to get impatient, imperious, impervious to all the improbable ways the world may actually be getting better.

When a kitten or an ill-timed human swoops her way, Disco’s first impulse is often to spin around and bellow, “Who darkens my counsel without knowledge?”

But she forgets that wisdom beats knowledge in the daily dance-off every time.

She forgets that she’s made of the same silly, scampering stuff as kittens and dunderheads and creatures of light spirit.

She forgets that the cavorting cannellini-heads behind the plate glass are no less laden than she, with her ten-plus years.

She forgets that every living creature, careening or crotchety, is cobbled together with both brilliant sunshine and the uncivil twilight that stalks hope.

She forgets that hope is always hers for the shnoogling.

And then we — young and old and feline and fallible — remind her.

But maybe Disco just has poor penmanship. (It’s hard to see your notebook in the strobe light of the discotheque.)

Maybe all those instances of kittens and fellow frolickers wasting time are really a case of washing time.

Maybe you have to be lighter than sprinkles to wash the dust from life itself. The dust is always there — you and I and anyone who’s endured her own dark night knows this too well — and it re-accumulates every time you Swiffer it away with your strength or your sweetness or your sacred stubbornness.

But time can be washed.

Things can get better. 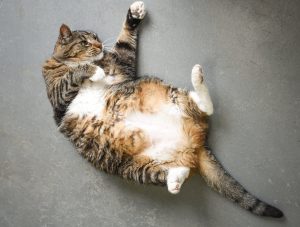 Disco, doldrum-eyed and full of years, is still a kitten inside. And so are you and me.

So we’ll keep convincing our dancer that lightness remains her birthright. When she tells us she thinks the world is going to Mordor in a handbasket, we’ll remind her that both she and the world have whirled through worse (The Hundred Years War, an extended cage stay in a crowded shelter, a decade of low-rise jeans, the temporary shortage of Turkey And Cheese Shreds).

When she scowls that social media is a scourge, we’ll point out that all our apps, far from turning us into apparitions, have convened a chorus of kind people, woven tight into each other’s lives with bonds that are as real and redeeming as they are mediated by keyboards. (They have also resulted in many, many, many cats getting adopted, but we shall not speak of that tender topic un-carefully with our sensitive dancer.)

And when she asks why kids these days do ridiculous things like watch other ridiculous kids play video games on the internet, I’ll personally remind her that the whole video game voyeurism is nothing new. How does Twitch differ from the scene c. 1989 — surely repeated in as many living rooms as there were little would-be Goonie children like me — when all my little rapscallion friends and I gathered around Kristin’s dad to watch him accomplish the mighty feat that he alone could achieve, that of beating Bowser in level seven?

We can keep singing, dancing, and scrubbing.

And we can answer Disco’s dread with the sacred balm of silliness.

We’ll cram her back into the kittenhood that was never meant to end.

We’ll wash and waste time together. 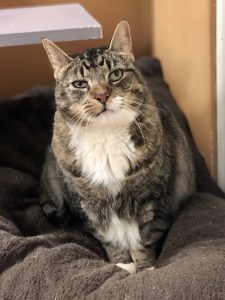 Even Disco is learning to do battle with the dust.

She accepts a hug without inflicting epic wrath: the plate glass grows a little clearer.

She leans into a lap, long-form, letting herself simply be loved, precisely as she is: light laughs through the smudges and makes them sing.

I want to dance.

I want to wash and waste time with you and Disco.