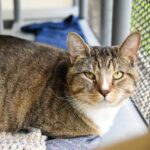 We are all, to a person, noisy.

This applies to the introverts and the anchorites no less than the chandelier-swinging celebrants of social butterflication.

The question is, what sort of noise will we make?

We are no strangers to noxious noises (to say nothing of aromas) at Tabby’s Place. Bang! goes Anka‘s famously short fuse when Valerie vaults into view. Crash! goes the overly-adorable cat-shaped ceramic dish of Starbursts on the Lobby desk when Hips heckles Grecca. Smash! go the heads of headstrong individuals into one another, as though their skulls were made of steel, or stone, or stale Starburst.

But every noisemaker has her reasons. 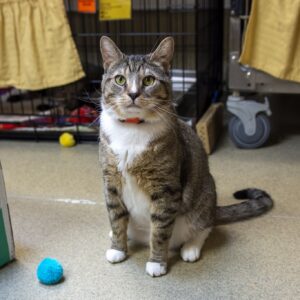 Quoth the eternally innocent Grecca: “The Starburst schlemiel had it coming.”

Quoth the gleefully guilty Anka: “IT ARE RAINING, which means everything is permissible.”

Quoth every cat who ever wove wisdom into his whiskers (which should cover all of them): “Life means noise. Good life means good noise.”

And we are all trying to be good.

I can almost see why Alex would anger-urinate. 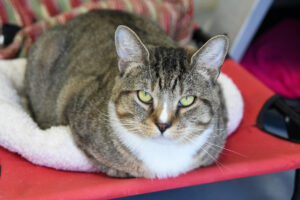 Anger-urination, that close cousin of rage-diarrhea, is an art generally reserved for protest movements such as We Shall Not Be Weighed or Death Before Nail Trims. But Alex, a one-man electrical storm, is not in the business of reservations.

He does not reserve his anger.

He does not reserve his exuberance.

He does not reserve his opinions, and they are many.

He does not even make reservations for dinner at the International House of Meat Products. 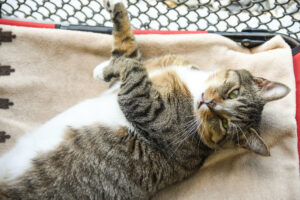 In all cases, he just bursts in, confident that such a cosmopolitan, debonair man as he will always find a seat, or at least a satisfying shouting match.

In all cases, he is correct. And crashingly, conqueringly, crassly, crudely, cataclysmically loud.

It’s more than a rumor that he was named for Alexander the Great.

But where that other Alexander (“write ‘Alexander the Less Great,’ woman!”) conquered the Mediterranean, our tabby totalitarian has his long, striped arms wrapped around a different empire. It is called Everything. 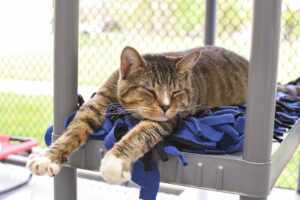 Accordingly, unreserved Alex does not conserve his energy. The jelly jar is not just open, it’s smashed (crash! bang!), and the jam of his joy is heaven-sent and hell-bent on making PB & J’s out of us all.

Alex’s noisy nuttery was no small part of the reason he came to Tabby’s Place. The shelter that sent him loved him, they did. But in the Annals of Exhausting Individuals, Alex ranks somewhere between espresso-enriched kindergartners and that aunt who keeps asking when you’re going to have babies.

And so, as the enchanting empire of cats who “no one else wants” (“Write, ‘who no one else deserves,’ woman!”), Tabby’s Place was ripe for a take-down by one Alexander the Greatest.

We haven’t been able to hear ourselves think ever since. 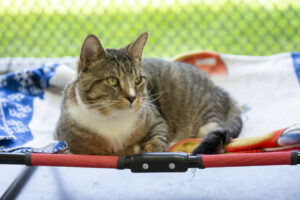 If early reports of Alex were anxious — “He is very aggressive and 14.88 pounds.” “EXTREME CAUTION with Alex.” “Volunteers not to handle Alex.” “Morning cleaning brings out Alex’s inner warlord.” “Alex is anger-urinating.” — the blame is not to be found with our fancy-free fireball.

No: the smashing cat with the shouting soul was simply making himself known.

Making his own noise.

Making the best of the baffling world he’d been given.

Taking it all by the fistful, and declaring it magnificent.

As eardrum-busting early days have eased into a rock-concert rhythm, Alex has acquired more admirers than the Mediterranean has mussels. (“Write, ‘if they really admired Alex, they would procure one million mussels for him,’ woman!”)

He’s a cacophony, to be sure, but more than that, he’s a counselor, the wry-eyed kind who’s doing Deep Work on your spirit when all you can hear are annoying questions. 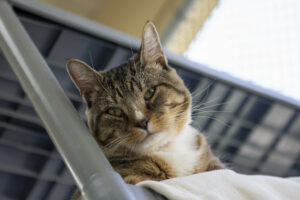 “Why did you say that snarky thing to your Mom just when she was being sweeter than PB & J?”
“What would you do if you believed everyone believed in you?”
“How do you feel when Aunt Liboria says you look unkempt?”
“What would happen if you sang out loud?”
“Who had the gentlest voice you ever heard?”
“When will you give Alex thirty thousand crustaceans?”

Next thing you know, you understand at least a few fragmentary lines of your own music…and everyone else’s, too. 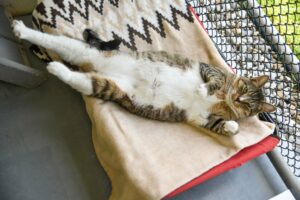 It was a long, unsheltered road that brought our striped savage to a city shelter, and then on to Tabby’s Place. If he’s explosive, at least he’s honest; if he’s astonished, at least he has the courage to take us with him, out to the rainforest beyond the staid suburban silence that keeps us scared and small.

He makes noise, because he knows that’s infinitely better than making nothing at all.

He makes something of the fear that follows every living creature, out-shouting the scared and the sooty and the sly lies that would like to leave us speechless. 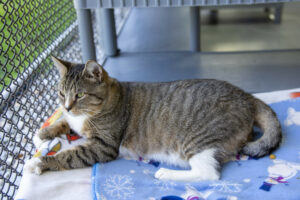 He makes something of the day, whether the sun shines or “IT ARE RAINING!” or meteorites fall like the rage-rocks of his own mind. (You have rage-rocks, too. So do I.)

We’ve all come to our crashing cymbals honestly, an empire of nut-job noisemakers, and it’s always in our power to sweeten the soundscape for each other.

Or at least to make a good noise.

Who knows? Your anger, agita, and honesty may be the crash-bang-smash that breaks through someone else’s fear.

Your lion-loudness might break the sound barrier of another’s understanding.

And anger-urinating might give way to the better music of sniff-and-kissing. That’s what Alex was most recently witnessed doing with one crunchy, saint-patient Carrot, you know. (“Write, ‘everyone should try baby carrots INSIDE their PB & J’s,’ woman!”)

So crank it up, kittens.

Get loud. Get cockamamie. Get a tattoo of Alex on your ankle. Get lost and found in the sound of life. And trust that Tabby’s Place will be roaring right there with you.

Fakers and makers, part I
Guest post: The happy continues
Epilogues: February 2022
Easy, easy
We are all Crime People