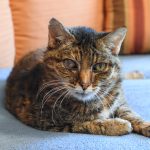 Disambiguation: Biscuits in this case are the American savory quick bread rather than the sweet treats found elsewhere that also require proper handling…along with a cup of tea, coffee, milk, or cocoa.

Every decent recipe for biscuits includes an instruction to avoid over-handling the dough.

Too much mixing or kneading, excessively enthusiastic rolling, reshaping and re-rolling after cutting out rounds, and all similar activities make for tough biscuits. Frankly, tough biscuits have more business being used for hockey than for slathering with butter.

For biscuits, as with many things, fluffier is generally better.

Personally, I cut my biscuits into squares, using a dough knife, and place them pretty close together on the baking sheet. The results are square biscuits, unfit for a magazine cover, with just the hint of crust.

Judging by the popularity of soft treats with slightly crunchy exteriors, it seems that many of the cats at Tabby’s Place would prefer less-handled, softer biscuits. They would know, too! Cats are among the world’s most experienced biscuit makers.

Even so, there are a few who, by preference or chance, lean in for the tough and crusty kind. The trick is knowing which cat is which, and which cat can be convinced to switch to lighter, crumblier biscuits.

For the cats who are set in their ways, like Samantha, there is quite a bit of a crust on the outside. Dig a little deeper, though, and you’ll see the fluffy, light center that leans in for pets and treats even while guarding food bowls from feline felons who threaten to claim what clearly belongs to Samantha.

Did I mention the bit of a crust? Even so, Samantha is no cookie-cutter biscuit. She might have been over-handled at some point, but only in being reshaped along her route to the Tabby’s Place lounge. Whatever else she is, Samantha is a beautifully baked biscuit.

With older cats, often their texture is set, but that doesn’t mean they are too tough to respond to a little buttering up and sweetness. Younger cats, though, tend to have the pliability of a soft, flexible dough. That’s the kind of dough you want for beignets, donuts, and all manner of bready goodies.

Those young ones are often up for anything, from playtime to naptime and every time in between…like 3/4 of the recently-adopted FeLV+ troupe of lads we call the “Dublin Dudes.”

Dunmore is a crumbly biscuit who could do with a little bit more handling and shaping. He’s already sweet, but he’s also shy. Watching the rest of his brothers interact with staff and volunteers was a definite benefit for him. 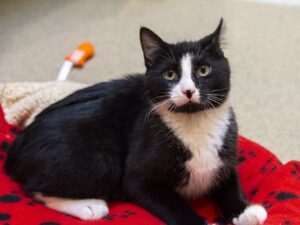 Importantly, he still needs to be attended to, like a dough that just came out of the food processor. With some metaphorical flour to smooth the way (e.g. a slow approach, wand toys, gentle coaxing), careful rolling out and shaping (playing, petting), Dunmore can be set up to develop just the right amount of crust that will make him better able to truly enjoy the company of the people around him. He’s right at the edge, and surely his closely packed brethren and forever family will all help Dunmore reach the pinnacle of fluffy height, with just the right touch of sturdy crust.

As is so often the case at Tabby’s Place, giving cats like Samantha and Dunmore everything they need results in humans having opportunities to learn. We can all take lessons from cats in how to knead, even in how much to handle a particular dough. For example, Houston is more of a sourdough kneader than biscuit baker, and once he’s done with the sourdough, he’s ready to move on to brioche and rye. 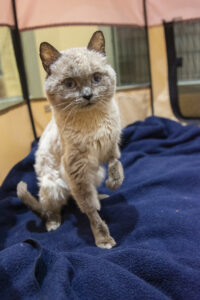 The key thing we learn is that cats, like biscuits, can be molded by human hands, given gentle care, attention, and time. Many of them are set in cookie-cutter fashion, and some are exceptionally crusty, but others are square biscuits, ready to crumble and having only the lightest crust.

Regardless, every cat, like any kind of biscuit, is a perfect accompaniment for the right person, who will provide a warm lap while enjoying a nice cup of tea, or coffee, or milk or cocoa.