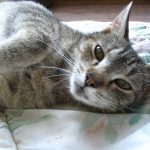 Godzuki is compatible with my old, long-obsolete iPod, hence its name: Podzuki.

The next new thing — also old now — was my Kindle, Toyzuki. That was followed by my brand-spanking-not-so-new-probably-already-obsolete smartphone.

As is typical, I’m using Phonezuki to write this blog. Monster phone for monster blog. 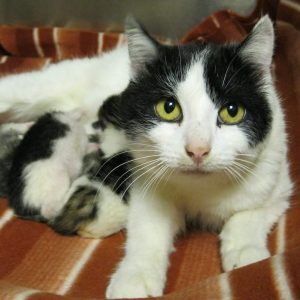 Anyway, this monster seems to be getting away from me, so I’ll muscle it back in.

Having had an exceptionally productive day with a bit of energy to spare, I was browsing through Felis Catus and thinking of a recent flood of emails sent to one A.H., which, believe me, actually stands for All Heart, and whose given name reflects that. [Oy! Focus!]

As I was having these ponderings and thinking of all of the recent contributions and contributors to Felis Catus, one “word” randomly popped into my head: Blogzilla.

I knew I had to write a truly monster (in the cool, Urban Dictionary sense) blog. And, here we are. You’ve got the DL on the monsters in my world, but now it’s time to  address the not-at-all monstrous gorilla on the room. By gorilla, I obviously mean a feral cat. Because, yeah, obvious. (Sometimes even I roll my eyes at me.) 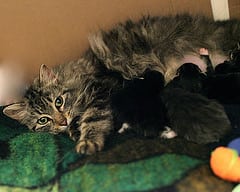 in a recent post to this blog by a marvelous volunteer, we were given a gentle reminder of a grand faux paw: mama cats are often overlooked in favor of their babies, even in the best imaginable places. At this particular foster home, though filled with her scions, this particular feral mama never had to roar to be heard. She was seen and appreciated for exactly who she was, despite the threats and armaments bedecking mouth and paws.

Now, kittens tickle and tumble. Kittens scamper and play. Kittens are fun, fuzzy balls of fluff (careful of the razor toes). They attract us and distract us, and we often overlook mama cat. But our amazing volunteer, having done no such thing, reminded us that a mama cat shouldn’t have to roar to make her point: concern for her kittens is all encompassing. Maybe mama isn’t the most cuddly or cutest cat. Nevertheless, she should be loved for everything she is, and tenderly respected, even if she has no desire for human attention. It is on us to be humane.

Many of us, with wonderful mamas of our own, say that every day is mother’s day. It’s true. Even when the mama is a cat that seems monstrous with her growls and swats, remember that she’s just being the best mama cat she knows how to be.

She may seem like a monster, but she definitely is not, unlike this blogzilla.