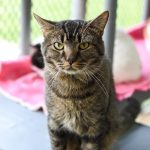 Take it from this fanilow, Barry Manilow’s oeuvre is just like cats (no, not the Andrew Lloyd Webber musical; the actual furbies).

But, the very bestest of the best may be the VSM (Very Strange Medley), because it is sublimely ridiculous, just like every single cat in 10 gagillion galaxies and over 200,000 bazillion years. You don’t have to take my word for it. Here it is:

I hope I’m not the only one who actually remembers the jingles as they aired back in the day. But, remembered or new (generous to call them that), this strangest of musical medleys puts a song in my heart and reminds me of a medley of spicy, wonderful peppercorns known as Tabby’s Place cats. 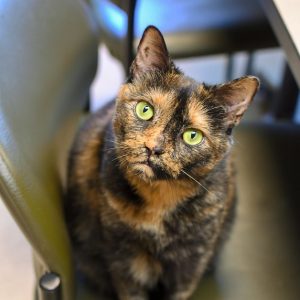 Recently, I had the good fortune of extra time and few enough people on-site to be able to spend serious quality time with kitties after my shift. The cats all composed such grand overtures and lyrical welcomes, they would have taken Bach aback!

In the Lobby, I had a mega-snuggle with a symphonic Stanley. He’s a real steamer, that one, and could blow the lid off a teapot with his magnificence.

In the Lounge, reuniting with spunky Marjory and floofy Farrah was simply lovely. But, then there was SHIFTY!! HE LOOKS SO BEAUTIFUL! That gorgeous boy rings all of the bells, and a few triangles too! 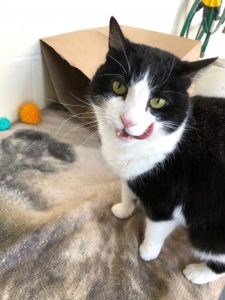 I also met Bosco. BOSCO! Chatty cat, dapper darling! He writes the songs and sings them LOUDLY, even providing his own back-up.

I hummed on down the corridor, following the beat of my own two feet and dancing into the Suite A solarium. PEPITA!! MY SWEETA!! I gave that little pumpkin seed far, far more of a cuddle than she would normally tolerate, but she DID. There was petting and snuggling and purring. MUSIC TO MY EARS!

Steven twinkle-toed over like a treble glissando on a harp. Pat, pat, pat! Then into the main suite, where I struck a cheerful chord with Adam! Then, suddenly, like a bang on a timpani, there was Boom!

Reunions are great (proof below), but so are first meetings. Blow the trumpets in a big hello to Stefan the stunner! And, CARBON!! Carbon QUACKS!!! Carbon could have been named Ducky, and he is one of the cuddliest kitties ever to exist in all kittydom. That one really strums on my guitar strings! 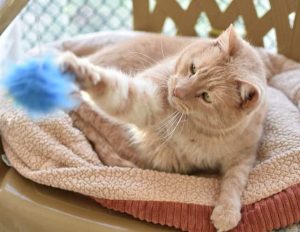 Ears abuzz after a brief interlude, I fandangoed down the hall to the Suite C solarium. There, I had my first non-stroller visit with Carrot since the beforetime.  He orchestrated a dreamscape of love and attention.

Joshua built on the theme, introducing himself so very charmingly, and with what can only be called goofy grace! By grace, he is a wonderful goof!

Wilbur even set a calm tone. Being in a receptive pose (even for accepting Joshua’s attention), I scratched Wilbur’s head, he tuned in and turned his head up, and my heart soared! 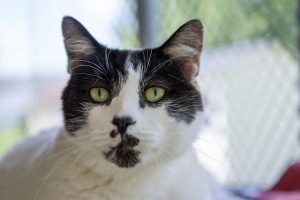 But, the grand finale, the crescendo of it all, WONDER OF WONDERS, JOY OF JOYS, there was ELIJAH!! For the first time in over a year, I have been licked by Sir Licks-a-lot himself!! This boy is just begging to be “rapped” up in love, and his nicknamesake’s talent is dwarfed by this master who bebops his way into pounding human hearts.

The melodies of Tabby’s Place echo and resound through each hour, each day, each week. The pulse of the space is a drum beat that keeps us moving. The purrs, the chirps, the mews, and even the occasional hiss, swell in a jubilant anthem. Cat and human voices blend together in heartwarming, happy harmony, a chorus joined in purpose and song about all that is good and right and safe and special in this world.