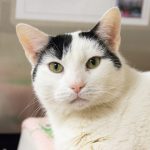 It’s entirely possible that we have galumphing hordes of grandparents on our hands.

We’re rich, kittens. Who among us, whether seven or seventy-seven, couldn’t use a good Grandpa or twelve?

As I type this post, dawn has risen on the first-ever World Day for Grandparents and the Elderly. Yes, that means you missed it,* but the good news is we’re celebrating all year at Tabby’s Place, and for all the years that shall ever be, ever and anon, forever and ever amen.

That’s not solely because age-rich creatures of all species are spectacular, although they are.

It’s not exclusively because “thank you” is the right posture when it comes to our elders, who should more properly be called our awesomes.

It’s largely because we are engulfed in ancients at Tabby’s Place, generously grandparented every day.

Called, as we are, to welcome cats from hopeless situations — the ones “nobody wants,” if by “nobody” you mean “nobody with a heart larger than a lentil” — we shelter more than our fair share of seniors. With their storied glory days behind them, old cats are horridly prone to being undervalued, underestimated, thrown under the whirling wheels of change. They’re over-represented in shelters and “situations” and sadnesses of all stripes, and so they shuffle our way in serious numbers.

Which means we are the richest ragamuffins who ever dared to love.

Unlike other grandparents you might know, our furred elders do not have 400,000 photos of their grandchildren on their tablets. (This is not to say they do not have their own tablets. I am not making this up. Just look in Anka‘s pen, currently streaming either birdsong or Parks and Recreation reruns, for proof.) We can’t know for sure whether our eminent, elegant, exquisite and absurd elders have ever spawned kittens and grandkittens.

Which means just one thing.

It’s up to us to be their grandkittens.

As it turns out, we were born for this.

On the days when you are sad and cold; when the world’s meanness tastes like that swig of orange juice immediately after you brush your teeth; when you drop your groceries and everything shatters, especially the crystalline trinkets of your spirit; Grandma Honey hears you whimper before you speak.

Huddle in close to her all-enfolding warmth. She’ll pop open her (rad, 70s-orange) Tupperware to reveal Jell-O she made just for you, the “red flavor” you love best. In her endless eyes, all you’ll find is unconditional acceptance.

When you’ve forgotten who you are, when the macerating molars of life gnaw you into believing you don’t have what it takes, go to Grandpa Fenek. He’s the keeper of stories, the keeper of the flame, the soul-stoker and silly poker who will tickle your belly and pull your arm in close with his paws when you stop petting him.

He’ll tell you tales of how he’s happified his way through diabetes and despair, only to come out chomping and charging and convinced to his molassessy marrow that life is more merciful than we dare to hope. He’ll give you the secrets of his many years: when you’re up in the night feeling sick, think of Neil Young, still rocking in the free world after approximately 700 years of diabetes. When tonight convinces you that tomorrow’s already asking too much, get out of bed and write on rocks — yes, actual literal rocks — the things you’ve overcome already, then stack ’em together and ponder your pillar.

You got this, and Grandpa’s got you.

In the hours when you see yourself all too clearly, when the “wrong” isn’t all in your head, when your shame and your creases are enough to make you cry, seek Nonna Betty. You can tell her all that you’ve done and left undone. She won’t lie and say the wrongs were wondrous; she won’t jab a Werther’s Original into your mouth mid-confession (although Grandpa Humphrey always carries those, if you’re interested).

She’ll just crumple the full force of her crinkled years and ears into you, every purr announcing that you are every inch of “lovable” even though you are still in progress. She’ll let you lament that the battle within will continue as long as there’s breath in your body, and then she’ll bless your breath with her own, a powder-scented benediction. She may even tell you that “Betty” is short for “Benedetta,” but they made her change it at Ellis Island. And then you’ll fall asleep in her stories of Palermo, until your own ears fold into a calm that the loud, loopy world can’t shake.

What about when you just need someone to steal you off the ground, loft you like a rocket, and even toss you over his head a few times when Mom’s not looking? Gramps Angelo is your guy. He keeps sleeves of Entenmann’s donuts in his desk at all times, and he’ll rush up behind you to spin you around until you both collapse in a puddle of soul-salving silliness. (Don’t fear the collapse: Angelo’s 570 pounds of fluff and blubber will break your fall.)

Gramps Angelo will coin new nicknames that only you and he will share, and he’ll draw caricatures of you on napkins during stuffy family dinners. He’ll remind you that you are a child, however old you may be, and you’ll always have a place at love’s table.

At Tabby’s Place, the table is always set.

The old are always among us.

Our grands are cheering from all the stands.

Blessed are the permachildren who let themselves be grandparented by cats.

*As previously noted, I write these reams of ridiculousness for you in advance, so that you will not go unentertained even if I am detained by pirates or senators or other unsavory characters. But that means things sometimes change between the writing and the reading. Then again, things are good at changing no matter what.