Tabby's Place > Blog > Ever given
By Angela Hartley
1 Comment
Uncategorized 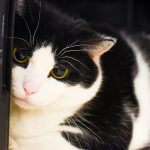 As I write this post, there is a ship the size of the Empire State Building clogging up the Suez Canal.

As I write this post, there is a cat the size of that ship clogging up our ability to function at Tabby’s Place.

By the time you read this post, one of those issues may be resolved. The second is beyond hope.

But I’m getting ahead of myself.

I’m optimistic that this will be resolved by the time you read it, but this very afternoon, the world is writhing in the weirdness of the Big Stuck Boat.

It’s called the Ever Given.
It weighs 200,000 metric tons. (This is approximately 2.8 million Jimmy Fallons.)
It got scared during a sandstorm, and now it can’t move, which means hundreds of lesser vessels can’t move, which means the whole world has to wait to get all the things to all the places where they belong.
It’s causing more trouble in the Suez than even Billy Joel ever sang about. 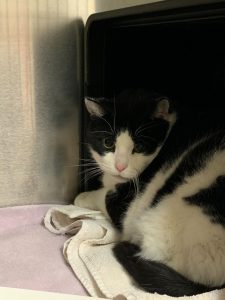 And here at Tabby’s Place, it feels remarkably…familiar.

If ever we were given a glut of glory, a creature whose size alone could sink and stun and splendorize a thousand ships, it was Hoagie.

The Hoag is Sumo-huge but unicorn-shy.
The Hoag is a heap of capricola with the heart of a (cowardly) lion.
The Hoag is happening to us, and we are stuck neck-deep in the special sauce of smittenness.

Ever since Hoagie hulked his way into Tabby’s Place, we have been a dozen dinky dinghies, pinned to our place and unable to function normally. How can we be expected to do our work, maintain decorum, behave like functional adults — in short, remain victorious — when a beast so big has jammed up our junction?

A point of clarification is in order. Yes: Hoagie is physically immense, north of 21 pounds at his immensest. But this is not the primary way in which our colossal captain is larger than a blue-ribbon hog. 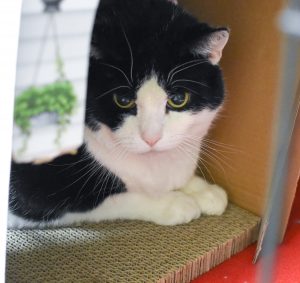 Hoagie is humongous with life.

Naturally, we are incredulous that anyone could part with such a monument to meaty exuberance. But, as is too often the story, Hoagie was hurled overboard. I don’t know the details and I don’t like to judge, so I won’t.

But Hoagie’s tender heart was hurt by that sea-tossed history, and at times the hurt makes itself known. Sweet in his essence, shy in his shell, Hoagie can also deliver sharp surprises — chunks of cheddar when we know his soul is mild provolone. It’s OK. This is Tabby’s Place, so of course it’s OK. We’ll help him learn to sail over stress, conquer the high seas, and finally deliver one supermungous heart to one very, very fortunate adopter.

Maybe Hoagie’s not stuck, even if we are stuck on him. Surely Hoagie has hope larger than his larditude. And whatever latitude the Ever Given is sailing as you read this post, Hoagie’s learning he will be ever adored, ever accepted, ever given the grace and mercy that every living creature deserves.

Housekeeping note: Between my writing and your reading, Hoagie, utterly unsurprisingly, has been adopted. I write these posts a good bit in advance, so you will be entertained even if I am kidnapped by pirates, and sometimes things happen in the interim. But, the happening of things is happy business, so we shall enjoy them together.
XO, AH

1 thought on “Ever given”

What's this all about?

The Linda Fund Matching Challenge is your chance to have your donation doubled...just when the cats need you most. From now through 10/7/2021, your gift will go twice as far for cats in crisis. Tabby's Place cats all come from "hopeless situations," which often means they need intensive or specialized care. The Linda Fund is a special reserve to cover the costs of life-saving emergency and specialty care for cats like Linda and Benny. Your Linda Fund donation will help us keep our promise to every cat: "You will always receive everything you need to thrive, no matter the cost."

Little Linda was the original inspiration for the Linda Fund in 2009. The tiny silver tabby arrived with painful burns on her legs, requiring costly specialty care. Thanks to generous friends like you, Linda made a full recovery, and today she's thriving in a loving home. Linda continues to inspire Tabby's Place to rescue cats in the most desperate circumstances.