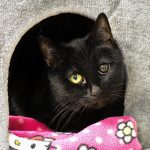 Eyes are for seeing.

Eyes are for winking.

Eyes are for sending us into the sky with swooning.

But recently, eyes appear to have fallen out of favor at Tabby’s Place. The coolest cats have consigned “normal eyeballs” to the dustbin, painfully passe, tucked somewhere between flare jeans, trucker hats, and the word “lit.”

If you think this sounds strange, hear me out. Cats establish trends at Tabby’s Place, only to discard them at will. We’ve seen this in all sorts of spheres, from coats (this fall, Lobby cats are wearing black and white) to symptoms (when everyone starts scratching their ears, Suite B is lit, or something).

As we look towards winter, there’s no denying that eyeball oddities are all the rage. All at once, Tabby’s Place is home to chariots of cats with wonky, wonderful peepers.

Making this fashion even fiercer is the fact that it’s worn by some of our farthest-seeing souls. It’s one thing to be adorably one-eyed as a kitten; it’s quite another when you are a venerable seer, the kind of cat who can read your inmost thoughts within eight seconds.

Such is Mercury, the grey-and-white goober who is and isn’t aptly named. Like the little red planet, Mercury is perpetually warm, heated by some sun of the spirit that streams out in purrs and head-bonks and one-eyed wonder. But there’s nothing mercurial about our even-tempered boy, and you don’t need to lose any sleep over him going into retrograde.

Shot into our orbit from a high-volume shelter, Mercury has seen the darkest fear and the most blazing hope our planet can offer. But on the edge of a new decade and a new forever home (it’s all over but the paperwork), his lone luminous eye is focused solely on the good.

That’s equally true of Dougal, sprung from the same shelter and blessed with two eyes, both of them cloudy. This brave little beast is simply one of the sweetest kittens and oldest souls we’ve ever known, forcing even his veteran foster family to wobble and consider keeping him forever. (When you’ve fostered 90,000 kittens, you learn to let go. But when you take on a Dougal, you’re almost done for.)

We initially thought Dougal was on the road to eyelessness. He’d developed an epic infection at the previous shelter, with hemorrhaging and swelling and all sorts of stinkage. But thanks to his extraordinary foster fam and their ’round-the-clock ocular awesomeness (read: application of endless eye ointments et al), Dougal is keeping both peepers. So, they’re a little cloudy; so, they’re a little misty; it’s all the better to set apart a kitten who’s in a class of his own.

Of all the micro-communities at Tabby’s Place, the Community Cats are the richest in eyeball anomalies. The Community Room alone hosts Polly, powerful in her one-eyed gaze; Impy (pictured in top thumbnail), eminent at eighteen with her Van Gogh-swirled eye; and Claire, whose eyes look normal but don’t seem to see everything. (That’s OK; she sees the unseen far better than those of us with normal orbs.)

Right next door, Casa Jonathan, you’ll find further evidence that odd eyeballs are a rising trend. Until his triumphant adoption last week, Inigo Montoya was the ultimate ophthalmological enigma. Scarring from an old injury left him looking permanently surprised, bereft of eyebrows but blessed with a handsomeness all his own.

Lest we leave Jonathan with no odd-eyed roomies, Inigo’s adoption made way for Shiny. Our rare FIV+ lady is still settling into Jonathan’s office, but she’s already savvy to the scene. With one cloudy eye, she sees Jonathan; she sees Stafford; she turns her gaze back to the wet food. Shine on, sweet girl.

As we close this entry on our seers and sweethearts, I will leave you with a boy who must be seen to be believed. Whether you live in Ringoes or Russia, it’s worth taking the trip to Tabby’s Place just to behold and become besotted with Smokey Joe. 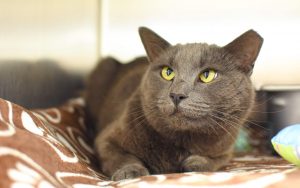 If that’s not enough to cross your eyes with delight, I’ll eat my hat. And my glasses, too.

Epilogues: April 2021
Not ours
Epilogues: March 2021
What you cannot lose
Guest post: Cattywumpus