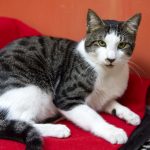 It’s true that a mind is a terrible thing to waste.

It’s true that our 44th Vice President once opined, “What a waste it is to lose one’s mind.”*

But in the brain trust that is Tabby’s Place, it’s a matter of considerable debate whether or not one’s mind should be perpetually present.

In the absence of professors, our mottled and meandering minds lack a sturdy syllabus. 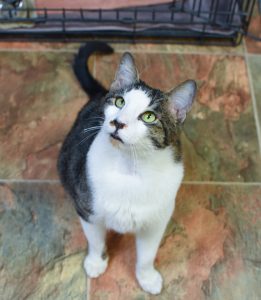 Surely you’ve heard the phrase “absent-minded,” and it’s never a compliment. At best, it’s a hyphenated half-smile, a pat on the head to someone who seems to be somewhere else. We use this term for people who misplace phones or thoughts or threads of conversation.

But maybe absent minds have found yet another feline gold mine.

There’s a reason we have yet to have a cat named, say, The Chancellor or The Commodore or Eminent Emeritus Ernie. OK, that reason is that Jonathan would personally and vigorously fire me if I suggested any of the above (the last one kinda has a ring to it, non?).

But in all seriousness, cats consciously choose the path of less seriousness. 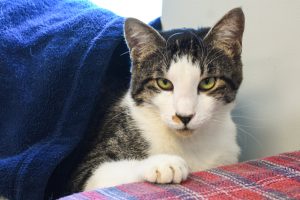 They possess full presence of mind and an average IQ of 195, but they use these gifts to choose a lighter confection than constant contemplation.

Consider Siesta. Long in nose, seemingly built for a solemn burgundy tie and sensible wrinkle-free Oxford, the most serious looking cat is the jumbliest jester this side of clown college. His face shouts “business,” but every fiber of his being (and I have it on good authority he is a highly cruciferous individual) is a purveyor of jubilee and lilting, jolting, jump-from-toadstool-to-toadstool turbulence.

No sooner does a thought knock on the door to Siesta’s head (e.g. “I should eat seventeen crunchymunchies now”) than another thought, wearing a bright red leotard, cartwheels into it (“Mousy appears to be in need of an epic beat-down”), knocking them both into a third thought (“What would happen if I attempted to vault my entire cruciferous person through the ceiling tile and into the mysterious secret passageways above Tabby’s Place?”). 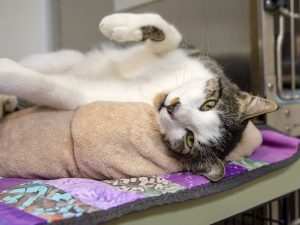 Or what about Citrine? As beautiful cats go (let the record show that there is no other variety on any planet ever), this quaint little quartz is a gem in a mine all her own. Some crazy quilter determined to use up all the scraps in her fabric drawer on the day Citrine was stitched, resulting in a tabbicalifragilistic feast of a fractal of a technicolor dreamcat. The Mind behind this fine creation couldn’t make up its mind on what kind of cat she would be, so it simply decreed, “I choose all.” 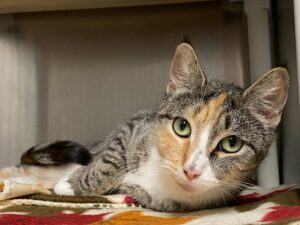 But if a soberly present mind might have chosen a calmer coat, Citrine’s inner themes are the real scene of scampering thoughts. One moment socialite-elegant, the next maple-sweet, Citrine can wrap herself in a patchwork coat of anxiety and shyness so fast, it’s all you can do to breathlessly sigh, “do you mind?”

But just when your mind is making up a story you can get your hands around, Citrine’s gems bounce out your pocket and go laughing down the hall yet again.

The same cat who would be invited back for tea at Downton Abbey is also a part-time member of an 80s hair band. Maybe we gave her too many back issues of Metal Hammer while she was finishing her initial stay in our holding rooms, but somehow Citrine got it into her ladylike head that trashing and thrashing one’s hotel room (by which I mean “quarantine cage”) is a gnarly and glorious thing to do, as often as possible. 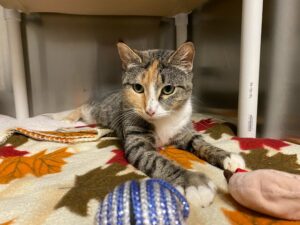 Where’s the fun in that?

So I don’t know about you, kittens, but I’m going to look to the professors and follow the bouncing brain-balls today. A little absent-mindedness just might mend our solemn world.

Who’s up for some crunchymunchies?

*Full quote, and I swear I am not making this up: “What a waste it is to lose one’s mind. Or not to have a mind is being very wasteful. How true that is.” – Dan Quayle

Utterly, splendidly unsurprising postscript: Citrine has, of course, long since been adopted.

1 thought on “They don’t mind”