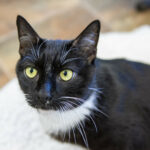 Cats are, and are not, threatened by one another.

The “are” involves natural resources. 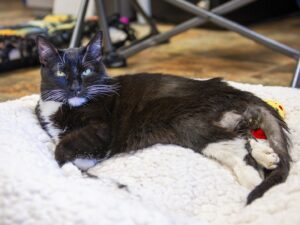 It is a little-known fact that the leading lights of Suites A and C periodically gather for meetings of OPEC: the Organization of Prosciutto-Eating Cats. Do not underestimate the importance of their endeavor. While the rest of us dream peacefully in our beds, these global leaders grapple with proper management and distribution of a threatened natural resource. Climate change may threaten our survival, but the fragility of the meatcosystem endangers our very souls.

But OPEC keeps having to convene, because the leaders keep coming to the same conclusion: all the meats must be consolidated in the mouths of the leaders.

You can see why they feel threatened.

Fortunately, when it comes to smaller issues, cats do not feel threatened at all. The stronger the cats, the less threatened they feel.

This makes Antin the strongest cat at Tabby’s Place.

I refer not to his strength of personality, although he is indeed the Atlas of animation, exhilaration, and garden-variety glory. Scour every atom from here to Abu Dhabi, and you won’t spot a cat containing higher concentrations of panache and pizzazz. Shake the rafters of each shelter and home, and you’ll fail to find a feline quite so fun, so festive, or so frolicky.

This is not Antin’s greatest strength.

Neither do I refer to his upper-body strength, although not even the combined forces of Vin Diesel, The Rock, The Hulk, the assorted guardians of assorted galaxies, and your tiny Uncle Carmine who glowers at juvenile delinquents from his front stoop, could lift more (per capita) than Antin. If necessity is the mother of invention, Antin’s paraplegia was the papa of his power. To behold his strong arms, swimming across the room like a swordfish through butter, is to be strong-armed into awe.

(To offer Antin a buttered swordfish would be a guaranteed path to sainthood, glory, six metaphysical gold medals, and one billion metaphorical dollars. Antin hereby invites you to claim your prize.)

This is not Antin’s greatest strength. 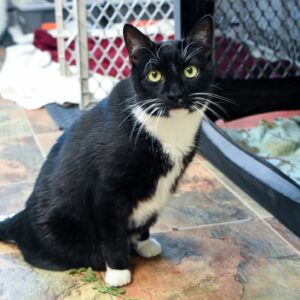 I don’t even refer to Antin’s affection, although this is a force no physicist could measure.

Even after losing the use of his back legs (for reasons we don’t know, having only been told it was sudden and strange)…

…even after losing the person whose love had been his power (for reasons that break our hearts, for both individuals involved)… 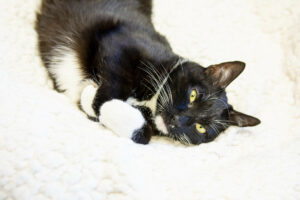 But not even this is Antin’s greatest strength.

Antin’s greatest strength is that other strengths don’t make him feel less strong.

(String cheese shortages do make him feel less strong. But even Superman experiences that.) 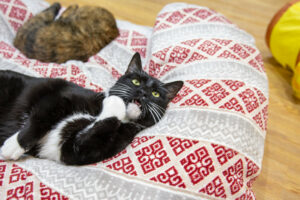 In the bodacious body of Tabby’s Place, Antin exults in his part. Leaping Kozmo may be a leg; athletic Nemo may be an arm; everyone knows that Hips is the humerus. But Antin? He’s elated to be the unseen amygdala.

This humble, hidden organ is a throne for emotions. It’s the Situation Room when stuff gets real. It’s the almond-shaped anxiety-fighter who makes the most of your memories, and who really digs mindfulness and meditation. It’s the mediator between the nibbly-jiblets of fear and the strength that summons you back to your feet.

It’s a powerful place to be.

And because Antin sees his strength, small and skittery though it may seem to the untrained eye, he can pump his fists with pride in everyone else’s power. 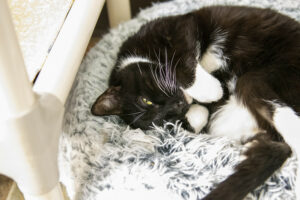 The leg can’t live without the heart. The arm won’t lift much without the lungs. And not even the egomaniacal eyeball can look at the amygdala and say, “beat it, punk.” (Uncle Carmine should remember that his juvenile delinquents are part of the neighborhood body, too.)

And so Antin goes from strength to strength. Because Antin’s greatest strength…is his strength of character.

So let’s not be so threatened by the tall trees and the sequined shineballs. Someone else may have more capital or cheese; your neighbor might be smarter or suaver or sillier.

But you, most excellent oddball organ, are loveliness and limitations, glory and graham cracker crumbs, nebula and neuroticism, all bundled into one strange, sweet, sensational self. 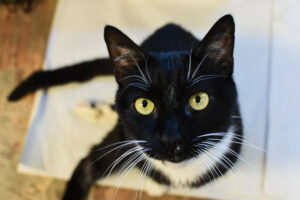 Your shaggy frizz-halo or debonair tuxedo or speckled belly are splendid and to be cherished, without exception.

So be strong in all you are and all you aren’t. You, as much as Antin and Superman and Uncle Carmine and all the presidents and and purveyors of prosciutto, have a place in this body.

We need us all.

Antin is so glad you’re here.