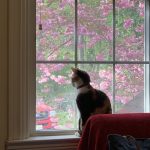 Editor’s note: Oh, kittens. You are in for a feast today, all tri-colored and triumphant. When phenomenal volunteers Cherise and Simon approached me offering to write a guest post on their Tabby’s Place alumna Libby, I jumped up and down like a little girl.

I dare you to read their words and not do the same. — A.H. 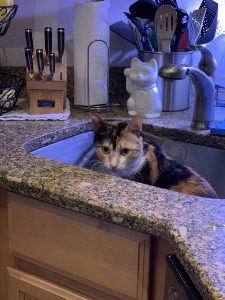 “Roughly two weeks into our stay-at-home orders, we celebrated Libby’s first adoptaversary— funny, considering that Libby hates being confined. There is something about being boxed in that terrifies her. She’s never met a carrier she likes, and she will find any and every way to avoid getting into one. (Because of this, she is already a celebrity at our vet’s office.)

After a traumatizing event in her native Lebanon—possibly involving a carrier?—and a 36-hour flight to New Jersey, it’s no wonder that she has an aversion to feeling trapped. Who among us wouldn’t?

We met Libby—then known as Abby—shortly after her terrifying-yet-exciting journey. We had been volunteering at Tabby’s Place for about a year, mostly because we knew that our ginger princess, Scarlet, would never allow another cat in our home. 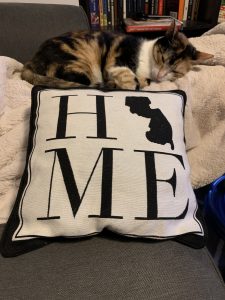 Simon was even more adamant about our lack of space, so the irony wasn’t lost on either of us when he was the one who immediately fell in love with the beauty from Beirut. She was one of those “approach with caution” kitties, the kind who might hook you with a left claw if you got too close, too quickly. But we engaged her with a wand toy and already felt a relationship building.

Cherise, who writes some of the adoption profiles for Tabby’s Place, knew that there was no way she would be able to write this particular profile. Both of us knew that if we were to come back one weekend and the little calico cat was gone, we would be heartbroken.

Ultimately, we decided that we just had to adopt her. We would build up our space vertically, with cat trees, and pump the atmosphere with cat pheromones, and introduce Scarlet slowly. We knew that Abby-soon-to-be-Libby was very fearful, and that it would take a lot of work for her to warm up to us, but we were willing. We started the adoption process, and soon enough, it was time to bring Libby home. 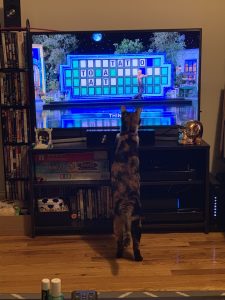 You know all those sweet adoption photos Tabby’s Place posts on Facebook? We don’t have one, because Libby was sedated in her carrier. She is that fearful of a feline. But, she did surprisingly well when we brought her home, crawling onto blanketed laps sooner than expected, and making herself comfortable on virtually any surface in the house.

Fast forward a year, and Libby has made herself completely comfortable. We’ll probably never be able to pick her up or snuggle her, but she’s a true lap cat, and she even lets us cut her talons. She is Cherise’s shadow, and birdwatches from her desk every day; she naps on Simon’s lap every evening.

Libby and Scarlet still don’t love each other, but they get along for meal and treat times. And while she has no plans to get into a cat carrier any time soon, Libby has actually been teaching us some crucial tips to get us through our cabin fever: 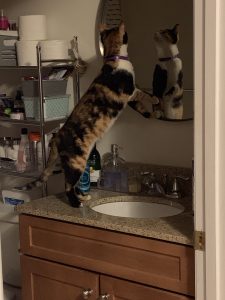 The moral of the story: don’t be afraid to befriend a fearful feline. Even one who is terrified of enclosed spaces.

If you find yourself on an extended quarantine, that once-anxious kitty might make the best company.”