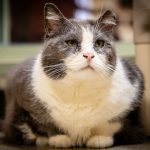 Hey. You. The cats asked me to ask you somethin’.

How’s the wait treating you?

Don’t be so surprised. Yes, I know you’re waiting. Of course you are. So am I. So are your barber and my uncle and Meghan Markle and Samuel L. Jackson.

And Jennifur.
And Wolfie.
And Crystal.

And all of the creatures of this earth. Even on our most divided day, we have this in common: we wait.

Maybe you don’t consciously feel like you’re waiting for anything. In my anxious opinion, that’s some of the weariest waiting of all. There’s no specific “something” in your sights, but you still feel it — you know you do — the sense that the picture hasn’t been fully colored in. 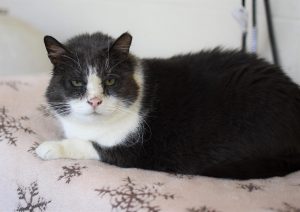 We stick our waiting on the cats like so many Chiquita banana stickers. (And if you tell me that, as a child, you did not eagerly apply stickers from apples and bananas to your own forehead just for ha-has, that makes me sad, and you should do it now, because such are the great pleasures of the young and silly, which you still are.)

We imagine the cats have some awareness of being not-yet-picked, left behind, uninvited to the prom that is adoption. We feel this most keenly when a longtime resident “loses” a dear friend to adoption — Wolfie’s loss of Buddy or Mona, for instance. Our own many-headed ache surges at the thought of a cat wanting adoption, knowing adoption awaits — maybe — and seeing so many dreams dissolve as others are chosen first.

The cats, of course, are waiting. They await adoption, attention, affection, among many other things.

But, unlike us, they do not wait in weariness.

OK, that’s a patent lie. They wait in weary worried pacing pain for The Time Of The Wet Food each day, and by 3:59pm they are nearly warlike in their wait-pain. (Delete “nearly” when it comes to Suite C.)

But, against all our anthropomorphic angst, they do not wait to feel their worth. That was simply never in the dock.

Wolfie lived at Tabby’s Place for just over five years. He came to our arms courtesy of a band of angels (the human variety) after doing time on the grounds of a military prison. He promptly began acquiring admirers and afflictions, which came to include everything from FIV to intractable constipation to heart disease to the single roundest body this side of Sumo.

But being a round character is a good thing, and Wolfie warmed the lives of countless cats (who went on to be adopted without him) and numberless humans (who were changed for the better by his curmudgeonly charm). We always believed he would be, at least could be, adopted, but we still couldn’t believe it when the day came.

The day came, kittens. Wolfie has been adopted.

We have every reason to believe our moon-shaped cat is over-the-moon happy for his homegoing. But we have no reason to believe he ever doubted his day would come — or even that he had any definition of “his day.” Of all Wolfie’s weirdnesses (and they are legion), “self-doubt” was never present. He did not question his worthiness to be lavished with all manner of goodness by all sorts of serfs. He did not compare himself to other cats, wondering what made his wait so much longer than theirs. 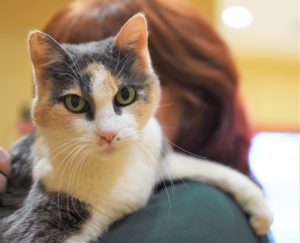 The same is supremely true for Jennifur. From Suite C to the Lobby to a lifetime supply of laps, Jenny was the picture of joy even though she was treading water between one adoptive home and another. That’s not because Tabby’s Place is terrific, although it is. It’s because Jenny knew how to squeeze joy out of every second, present and pleased and plump with the miracles of life along the way. (Bonus: since Jenny lived in the Lobby, she did not have to wait for 4:00 for The Time Of The Wet Food. In the Lobby, the wet food flows like fishy nectar, which is a revolting image, but I digress.)

Jenny made many “maybe” lists, acquiring enough First Runner Up sashes to swathe New Jersey. Over and over, she was almost chosen, only to clap politely as someone else was named Miss Adoptamerica. But she clapped loudest for herself, clearly and fully in possession of her own worth. And when the day came to become someone’s forever Jenny, she purred out the building with perfect peace.

I could go on. Crystal was chosen a second time after enduring the ugliest of indignities (being returned years after her adoption) and the second-ugliest of indignities (going through multiple rounds of terrible treatment for unrelenting ringworm). She waited, sure, but not for an assurance of her beauty and splendor. Those goodies, she owned like Oprah owns all the things. And today, she’s again — forever — an “owned” cat, the proud owner of her own family.

Waiting is not optional, and it doesn’t end. You’ll note that, at the start of this post, I listed Jen and Wolf and Crys among those who are waiting, present tense. That was not an error. Even though their ever-after has arrived, their lives go on, and so do their unfinished poems. There will always be something ahead (generally wet food). This life will never present itself in perfect moonlike fullness.

But waiting need not mean worrying, wearying, wearing yourself thin over your worth. Whatever has yet to come your way, you are ripe enough today. Don’t let your ever-afters convince you that they are i-t IT. Before and after and even if they never come, you will be waiting. There will be joy in the in-between, if you only seize it.

And all along, you will be wanted. Worthy. Welcomed with open arms to the feast.

Let’s nosh on the now, kittens. If even that wonder-walrus Wolfie can wait well, so can we. Except at 3:59.