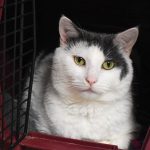 I fear I may have spoken too soon.

The calmness of Kashi has been overstated.

It turns out he’s a stuffed animal with a spine of steel, and he’s feeling his oats. Fortified oats. As in, armed to the teeth.

Kashi, you’ll recall, came to us with a reputation for busting heads. He was rough on the other cats, they said; he was a scamp, a scalawag, a rapscallion.

But we saw only a big bowl of basketball-headed bashfulness. He was puffed rice gone mushy in a bowl of highly sweetened soy milk. He was mellow mercy. He was humble love and happy lowliness.

We are no great analysts. He was no such thing.

Wilbur, alas, has seen the iron-fortified side of Kashi. Reality hits hard, and cereality hits with blinding boilermakers of bran and bravado. Reliable sources have seen the two grey-and-white goofballs all tangled up and screaming, and no one is quite sure who’s the aggressor.

Wilbur would be the easy mark here. He was, after all, returned to us after months of viciously, unpredictably savaging his patient adopters. These dear souls truly tried everything, and it shattered them to say goodbye. But trust me, kittens; we didn’t and don’t hold it against them. Wilbur is just that volatile. It’s unspeakably hard to share your home with a cat who goes from “I love you more than fishes” to “MY FURY IS A THING TO BEHOLD” every twelve seconds.

We love Wilbur. We long to understand Wilbur. We yearn to warm Wilbur’s heart once and for all, such that he bites and thrashes no more. Something is tragically unsettled in the soul of this great cat, and while we love him exactly as he is, we ache for him to know and live in peace.

But in the meantime, we watch and work with Wilbur carefully. His Suite C roommates are no strangers to his strangeness, so Kashi would have an easy job of framing the neighborhood nut for fits of rage. An easy job, that is, if not for the witnesses, human and feline. Kashi takes Wilbur’s wildness and raises him rabidly. Any cat who would seek to clobber Wilbur is…well, a few Cheerios short of a bowl, to say the least.

So consider this my regretful retraction, kittens. I have misrepresented Kashi. He is love and humility and fury and bravado, gentleness and wrath, peace and madness. Like you and me and Billy Ray Cyrus, he’s a far more complicated creature than he appears.

And, mercy, do we adore him.