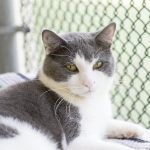 If Wilbur were in fifth grade, he’d be the kid who responded to roll call not with the standard “here,” but always: “present!”

But that’s not because he’s obnoxious. 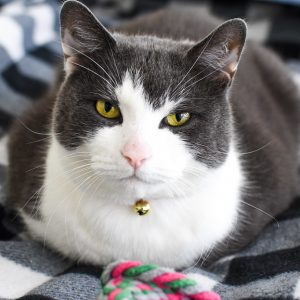 Wilbur is, of course, here. He has been here on planet Tabby’s Place since the time when the earth’s continents were congealed into Pangea. (Which is to say, c. 2016.)

But there’s a crystalline distinction between being “here” and being “present,” and only the brilliant and the brave achieve the latter.

From early in his Tabby’s Place tenure, Wilbur made it clear he was a woolly mammoth in a herd of hamsters. He was neon in a palette of pastel. He was a glow-stick in a vase of baby’s breath. He was potently, if not always poetically, present.

The presentation was not always pretty. Walloping one’s neighbors does not win you a Nobel Prize. Chomping human calves like candy canes does earn you an orange collar, visual shorthand for Zestful Insanity Located Here. Throwing your entire sixteen-pound presence into every question, quiet moment, or roadblock does not keep the peace.

But peace, as the brilliant and the brave know, comes in many candied colors. 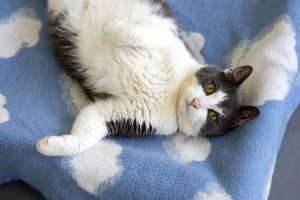 The peace behind Wilbur’s pinwheel eyes may feel too dangerous to stow away in a manger. But Wilbur remembers what most creatures forget sometime after fifth grade: that mangers are full of rowdy animals and unexpected arrivals and, in at least one case, a crying child who also knew a thing or two about perplexing peace.

And so Wilbur presents himself.

If you pay attention to those pinwheels, and roll yourself into Wilbur’s wheelhouse long enough to let him kidnap your lap and your dignity, you’ll glimpse a deeper story. (Let the reader understand: there is always a deeper story.) Wilbur is the kind of wise man who spends each night preparing himself to present himself to the next day.

He glimpses himself in the stainless-steel water bowl and says, “I have been willed and wanted and woven…and the results are ravishing!” 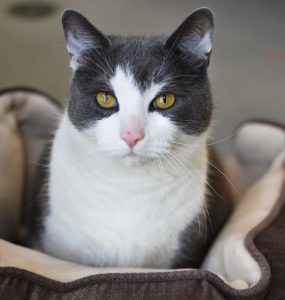 He awakes (after approximately fourteen seconds of sleep) and says, “let the gift-giving season begin!”

And then he gets down to it.

He presents himself to you, full-strength, grin blazing, generous with his gratitude that you exist. Gratitude, after all, is a gift, a neon glow stick pressed into clammy, lonely hands attached to shivery, wintered bodies that forget their own festivity.

He presents life to you, platters of it, willing and Wilburring you to taste and see that Life is good.

He presents his entire essence to you, unafraid of judgment (he who has survived being orange collared can own all his ragged ribbons); unafraid of rejection (he who has been adopted and returned can return to himself with dignity); unafraid of anything but the possibility that you won’t unwrap his present.

Or even worse, that you won’t unwrap this present moment. Because here you are, under December skies, with a neon mammoth of a cat who wants nothing more than to grab the world with you. 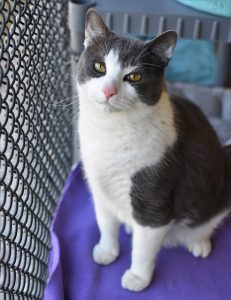 Wilbur wants to grab it all.

Wilbur wants to be grabbed by the glitter ball of life, even the cracked shards, and to gab about it with you.

Wilbur, triumphantly tucked into second grade, wants to pull you out of second place. You don’t live there. You, too, are a gift. And when you live out your much-lovedness, you give all the other children permission to see themselves as presents.

Greedy though he seems — OK, greedy though he is — the wild boar of Suite C is a selfless sort. It takes courage to come to the table with your whole wobbly tower of dishes, crowd-pleasing cookies stacked precariously atop the weird jackfruit casseroles. It takes courage to be the present, give the gift, prevail over powerful forces that convince shining creatures that they are mere tinsel.

It takes courage to present yourself.

It takes courage to kindle courage in your friends. 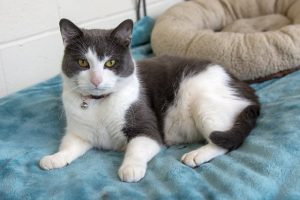 It takes courage, and a little obnoxiousness, and a lot of peace, to remember that everyone you meet is a present.

Maybe that’s why it’s taken Wilbur several geologic ages to get through to us at Tabby’s Place.

Maybe his delayed future adoption (can anyone doubt that his forever rave is out there?) is in service to a sacred present.

Maybe there’s more than a holy ghost of a chance that Wilbur is here to make the weary world rejoice.

Maybe we’re in the presence of greatness. 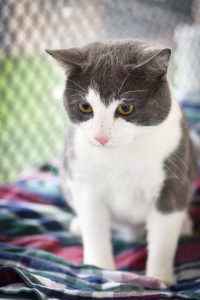 The Greatness Of Every Cat is the gist of Tabby’s Place. We are the hearth where the weary ones warm up and wake up to their own worth. We are the starry eyes that see splendor in rowdy behavior and unkempt coats and homemade gastrointestinal gifts.

We uncurl unkindness and unwrite unlove-letters, far as the curse is found. We are the perpetual present for cats who had no future.

We are also, if we’re honest, a pack of obnoxious fifth-graders who need constant reminders that (a) we are loved, (b) everything is going to be OK, and (c) it’s safe to be a glow-stick even when the whole continent feels dark. Especially then.

And that’s why Wilbur greets each day with the whoop: “Present!”

Let’s present the world with some Wilburian promises this holiday season, my little glow-sticks.

Let’s give the gift of reminding other gifts that they’re gifts.

Joy to the world, kittens.