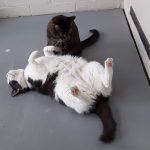 Many among us know what it is to have tender tummies. From minor post-binge tummy aches (Halloween and Thanksgiving, I’m talking about you) to things like Celiac or Crohn’s, tummies can be tricky things that we have to treat gently.

At Tabby’s Place, there are lots of cats whose tummies are super tender, and we treat them accordingly, with gentle diets and nutritional supplements. Many of these residents are in Suite A, but there are enough of them that a tender tummy can be found in many places around the building. These are tummies that we people are very careful of in our caregiving and love-giving attention to these sensitive kitties. 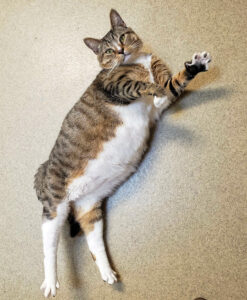 But, then, there are other, not-so-tender tummies that can actually be touched and rubbed. It takes some time to figure out which cats it’s okay to do that with. It’s very important to take the time to learn when the chest is okay, but only down to just that exact spot. Yes, that spot right there. Go no further! This is essential because for some cats – actually for many, many cats (most cats?) – an offered tummy is a trap.

You know what I’m talking about. Nice kitty. Sweet kitty. Aw! The kitty is showing me belly! The kitty wants a tummy rub!

One of the biggest tummy trappers at Tabby’s Place is Alex. He’s a beautiful, big tabby who enjoys stirring up just a little bit of trouble for his own amusement. Alex has learned that a proffered tummy is an irresistible temptation for the humans who fawn over him. Over he’ll go, exposing soft, luscious tummy fur. A hand will come in for a pat, then…SNAP!! The trap will slam shut. 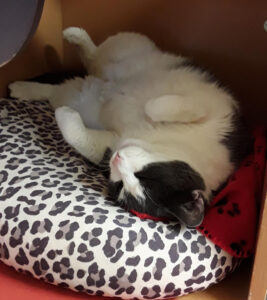 The result is neither good for Alex nor, more particularly, for the injured party.

Alex is not alone in his penchant for exposing apparently-but-definitely-not-pettable parts of himself. Suitemate Wilbur would like you to believe his tummy isn’t a trap. Don’t believe him. As it is definitely a work of art, it should be treated the same way as any museum piece: Look. Don’t Touch.

And, over in the lobby is sweet, adorable, affectionate Anka. He loves attention from anybody and everybody who is human (Cats are a massive no go!). However, Anka is more than a little bit impish. There are times when he’ll look up at a person with his beautiful eyes. He will offer up a soulful, gentle gaze. He will roll over and expose his lush, sumptuous belly.

Now, back away slowly. It will be safe to return once the imp has settled back to sweetness.

Safety warnings aside, the truth is that Alex, Wilbur, and Anka are wonderful cats. Interacting with them is important, just as it is with all of the cats at Tabby’s Place. Good quality interactions 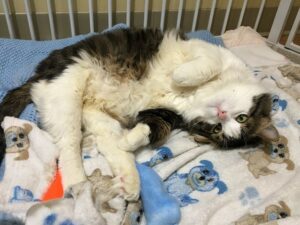 and rewarding for them and for us humans. The key is to be just a little bit more wary with these tummy trappers than with other residents.

It’s important to note that among Tabby’s Place residents and non-residents, many cats are harder to read than this trio. There are those who will accept an incidental tummy rub. Be mindful! Go too far and a trap will be triggered. Then there are those whose tummies can be rubbed almost endlessly. Enjoy the rare, special treat. 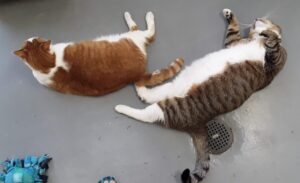 The last time I checked, despite swirls galore, there is no calligraphy on any cat. So, next time a furry friend looks at you with those eyes, the head tipped at you in just such a way and he rolls over and shows you that tantalizing tummy…RETREAT!