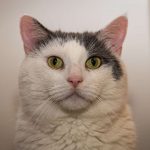 Don’t be looking for Weetabix here.

This ain’t no Frosted Mini-Wheat situation.

Tabby’s Place is presently in the presence of the biggest biscuit, the heartiest whole grain, the mostest Maxi-Wheat you’ll ever meet.

Kashi is every inch as organic and exceptional and scrumptious as his trademarked namesake. But where Kashi wheat rectangles conveniently fit one micro-dab of jam inside, Kashi the rectangle-shaped cat would fit universes. 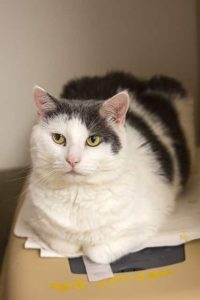 You would be forgiven if, on first glance, you looked into Suite C and thought you saw Pancake gone pale and huge, as though she’d been blown up with a bicycle pump, her black patches spread so thin they faded to grey. But, no; our favorite flapjack is nowhere near as large as Kash (we’re on a nickname basis, the Kashman and me).

You would also be forgiven if, on second glance, you worried that we’d somehow neglected to neuter one of our residents. Forgiven and also almost right: Kashi’s glorious volleyball-sized head didn’t get that way by accident, and indeed he arrived at Tabby’s Place, um, fully equipped at age eight-plus. That’s enough to give any guy jowls like Captain Crunch.

As the sad and soggy story goes, Kashi was a cherished pet for most of his eight-plus years. He was loved, albeit never neutered, but his people treasured him with his stinky pee and bad-boy aggression towards their other cats and all. He was organic. He was all-natural. 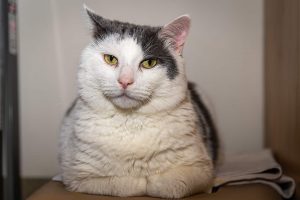 But when cash got tight, he was in a world of trouble. Kashi’s family found themselves unable to afford their pets, and so Kashi and the krew found their way to a crowded public shelter.

Before our huggable hunk could hang his hugenormous head, there was a change of bowls, and cereality got sweeter, fast. Kashi was now a Tabby’s Place cat, and his cash flow would never again be a concern.

Since arriving at Tabby’s Place, Kashi has made the most colossal impression. His otherworldly-awful pee announced his unneutered status, so one of our first orders of business was, well, taking care of business. He’s shown not a flake of fierceness towards other cats, so we’re chalking that crunchy behavior up to raging hormones now gone mild. 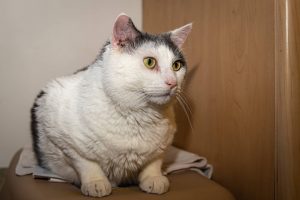 But Kashi’s no melting marshmallow, either. Well, he is, and he actually looks like one, too, especially when he’s side-leaning the pink half moons of his eartips into your hand, big toes flexing with pleasure. But he’s no pushover. While we haven’t seen him tangle with the infamous dunderheads of Suite C, we know he’s not letting them loom too large in his mind. He’s taken up residence out and about in the center bed atop the cat cubbies. This is the most pettable, visible, I’m-In-Chargeable corner of Suite C, and it can only be held by a cat who holds his head high.

We have a feeling we won’t get to cuddle Kashi too long at Tabby’s Place. He’s simply so scrumptious, so rumbly, so maximally magnificent, he’s about to roll into a bowl of bliss with a forever family. But in the meantime, we’ll laugh and nuzzle and rejoice with this John Candy of the cat world, richer to have Kashed in for a season.