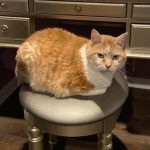 Editor’s note: You may or not realize that today is Friday. That’s understandable, given the minor inconvenience of The Defining Event Of Our Generation. So if the global pandemic has all of your days running into each other like a pileup of oatmeal at the bottom of a hill, this post should refill you with some pure-Friday joy.

Let’s all get blissfully un-bugged with one illustrious alumnus, Bugsy. Thanks to Bugsy’s phenomenal mama for the following. — A.H. 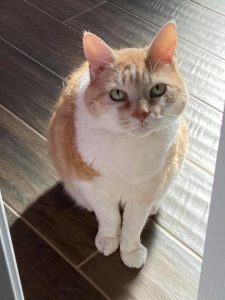 “Bugsy has been acclimating wonderfully and taking such great strides!

He does have full access to our home but mostly stays upstairs so he doesn’t have to deal with my toddler during the day.

All of the cats do coexist peacefully. I don’t think I’ll ever find him cozied up with the other cats, but they’ll all peacefully hang out in a room together during the day. As far as any concerns, I don’t necessarily have any right in this moment, but if that changes I’ll definitely reach out.

Unfortunately, in February, we had a very sudden an unexpected loss with our cat Grady, which put the whole house into chaos. All the cats loved him, and he even got along so well with Bug, so it really hurt us all. 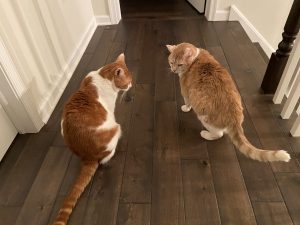 It’s gotten a lot better since then once the cats were able to establish their new dynamic. Since then, we foster-failed a cat named Jelly who has taken quite the liking to Bugsy. Now I often find these two orange boys hanging out together.

Bugsy basically lived in closet for quite a long time, since that’s just the kind of cat he is. He slowly began to come out into our room, then the 2nd floor, and now he’ll even come downstairs if he feels like it. I’ll admit, the first time he came downstairs on his own, I cried. I was so proud of him.

I’ve had a lot of cats in my life, and he’s definitely the slowest and most cautious-to-acclimate, so every little step he takes is such a huge milestone. 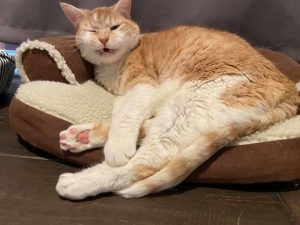 He loves to follow me around and will often try to climb my leg to show affection as if he’s trying to give me a hug. Every time I sit on the floor, he’s right in my face. We have tried to get him to cuddle with us in bed, but I think our bed is too high and it makes him nervous, since he has no issues hanging out on the daybed in our guest room. I recently bought pet stairs for him to see if that might ease his mind a bit.

His favorite place in the house is my son’s room. The moment my kid wakes up for the day, Bugsy will trot right in there and hang out under the crib, or lounge by the window on a blanket that I laid out for him. 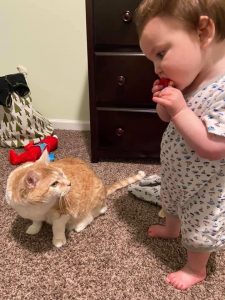 At first I figured he was going in there to hide, but when I started to see him snoozing on his back with his belly out, I knew he was just a fan of the atmosphere in there, haha! It’s definitely one of the best spots in the house for sunlight.

Here’s a bunch of pictures of Bugsy from the past month or two. You can see him with Remy (the tabby) and Jelly (the other ginger).

There’s also a shot of Bugsy with my son. Bug was nervous at first, but Nolan gave him very gentle pats for a few seconds, then went off on his merry way to go do more weird toddler things, haha!

Let me know if you’d like more pictures. I’m pretty sure, especially now, that everything on my phone is cat pics LOL!”