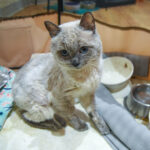 Yet, even aside from Sumo wrestlers, basketball players, and American football linebackers, some people just take up more space than others. These are the people who can’t be ignored and who, generally, won’t “just go away,” either. They might be big or small, but they’re all larger than life.

It is sometimes easy to identify these people by their clothing. These outrageous individuals might wear whatever they want (I’ve heard tell of a smashing pair of green velvet pants that I’m aching to see first hand), whether or not it clashes with other things they’re wearing, or their age, or the task at hand. Adornments might include items unsuited to any occasion, like bright yellow feather boas and twenty loud (visually and audibly) bangle bracelets on each arm, or their faces might be bedazzled by fabulous eyeglasses (Dame Edna puts the rest to shame).

But, it’s more than clothing and accouterments that make such people stand out.

Behavior is a significant part of what makes a person a “bit much” to take. Sometimes, it’s just a matter of laughing a little more loudly than anyone else. Sometimes, it’s a very big matter of maniacally running around outside a fast-casual ice cream/restaurant chain due to a fierce sugar fit caused by consuming an entire sundae that consisted of 5 (yes, FIVE) scoops of ice cream, a whole banana, and 5 (yes, FIVE) toppings rather than having a sensible dinner. 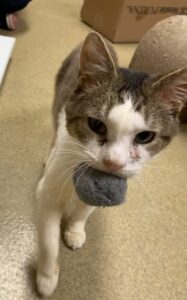 (I’ll neither confirm nor deny the veracity of said events; although, neighbors may have borne witness to a repeat of the running, but in the parking lot at home following a very uncomfortable 20 minute ride).

These individuals might be seen as “rather a lot.” And, although the clothing thing and the ice cream thing are less likely to be a thing, there are cats who are also larger than life, no matter how small.

Shaggy is one such vivacious individual. This little tabby with a healthy dose of marshmallowy white on his coat is more playful than many kittens. He likes attention when he wants attention, otherwise not so much — he’s too busy with toys.

Further, Shaggy has a way of getting into other cats’ faces without knowing or caring that he’s doing it, and they don’t all seem to appreciate his quirks. This little guy has an excess of joie de vivre and verve. Shaggy is little, but he is a lot of cat.

Sometimes, though, “a lot” comes in other forms, especially with cats. Take Verde. She’s a beautiful girl with dazzling swirls, and she has a propensity for helping with writing by sitting on binders and for leaning head-to-head with a writer…sometimes.

Other times, an attempt to touch will lead to a warning swat. It sometimes seems that Verde isn’t all that comfortable in her own skin. Everything becomes “a bit much” for her to take, which translates into her being another kind of “a lot.”

Make no mistake, Verde is splendid and would thrive if she had an opportunity to spend less time with some other “a lot” representatives of the Community Room. Not to name names, but Frankie and Jeannie are “a bit much” for Verde’s comfort.

Then there’s Houston. His need for a personal residence within the overall super-residence of the Community Room, along with the bumpers for his bowls and litter pan, plus his other special needs, automatically make this petit chat “a lot” to take care of.

Houston is also a spirited eater, which makes him a lot to clean up after.

But, most importantly, Houston is a lovebug who thrives on a lot of attention. A LOT. Whatever you’re imagining, it’s more. Houston wants, needs, and deserves MORE. Yet, he’s so little…and sweet…and cute…and floofy…

Ahem.There is a certain majesty to cats like Shaggy, Verde, and Houston. Spending time with them is inspiring in the same way as watching the flight of a great blue heron. It takes one’s breath away, sometimes with awe, always with joy.

It’s enough to inspire 10 sundaes worth of the zoomies, and that is rather a lot.