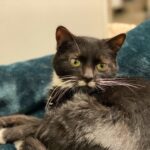 Heartbroken preface: one of the perils of writing these posts weeks in advance is that, sometimes, “tomorrow” knows terrible things that I don’t.

At the time I wrote the following, Alvin was at the peak of his zest. Days later, his health took a tumble, then a turn for the terrible. Despite the tireless efforts of our valiant vet team, Alvin made it clear his time had come, and boarded the sky chariot all too soon for our liking.

Yet everything written below still stands, and Alvin still shines. “The peak of his zest” is where he’d like to live in our memory, and so he shall. Forever. XO, AH

I just came to a major revelation, up there with “mint chocolate chip ice cream doesn’t taste right if it isn’t green” and “dragonflies are tiny sky chariots who I would give a kidney to ride just once.”

Here it is: life is stressful.

Specifically, my little candle of a life is stressful. I know this is a state shared by all lights, yours included.

Whether you’re a long-bearded monk in a Macedonian cave or a Chanel-clad influencer inking a deal with Netflix, your days waltz and whirl in ways that are sometimes a bit much. Even if your cup overflows with goodness and mercy, there are days when it sometimes simply feels a bit full. Stress-full.

In the all-time annals of A Bit Much, there is an entire chapter devoted to Alvin Rosenberg.

Alvin is one of the smallest chips in the vast mint chocolate vat that is Tabby’s Place. (“Tabby’s Place: A Mint Chocolate Vat.” This failed our early focus groups, who inexplicably preferred “A Cat Sanctuary.”) Alvin is a tater tot who fancies himself a tater titan. Alvin is a chipmunk in a world of squirrels. 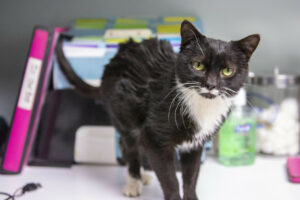 But like that other chipmunk who shares his name, Alvin is an asteroid of ego and elation.

Although you can pick him up with one hand (and lift him high over your head as in The Lion King, proclaiming him Emperor of the Mint Chocolate Vat…wait, am I the only one who does that?), Alvin is a mountain in his own mind. Make that a mountain lion. He will heave his entire popcorn-kernel-sized person upon far larger cats, commanding them to listen to his squeaky songs and/or perish.

He is the otter hiding in the apple cart. He is the volcano under the peaceful meadow. He is the chipmunk who chews through three hundred handmade quilts just before the big bazaar, forcing the quilt ladies to run out and buy Costco fleece blankets instead.

Let the record (and the crime reports of his feline neighbors) show: Alvin causes stress.

Stress was the story that sent Alvin our way in the first place. Dappled with diarrhea (which would be a great name for a band, albeit a band of a very particular stripe), the gastro-gobsmacked cat was simply too much for the kind and caring shelter where he lived. Through the usual series of improbable, incandescent, ineffable excellencies, he became a Tabby’s Place cat.

And swiftly set about to living the good life. Which is to say, the stressful life.

Monks and therapists and persons named Deepak would probably recommend that Alvin consider mindfulness. They would prescribe self-care and test his doshas and offer him books from the Desert Fathers. (Maester Gator, in particular, is a fan of Macarius of Egypt.) They would introduce him to box breathing exercises and mantras and mudras and mandalas, or, at the very least, decaf. 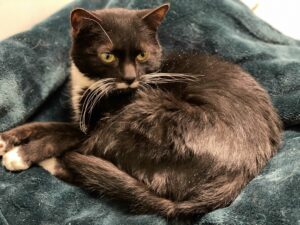 They might look at his frantic fullness and get a little feary.

And in so doing, they would overlook the magic of the chocolate chip cherub whose joy is never, ever weary.

There’s no denying that Alvin breathes in stress. It’s inseparable from his Alvinity: he vibrates at a higher, hinkier frequency than the average mammal. He flies where others meander. He makes manic merriment where others rest, relax, and rejuvenate.

But we would fail our fulsome frolicker if we neglect to notice that he breathes out bliss.

It’s his own brand of bliss, batty and tabasco-battered and bound to baffle friends of all species. It’s a bliss that needs, at (oft) times, to be brought into submission, via stints in our one-cat Timeshare Suite, and behavior medication, and a Daily Devotional For Cats Who Do Too Much (written by Mr. Thief and J’Happy, who understand both stress and bliss better than an aircraft carrier full of analysts). 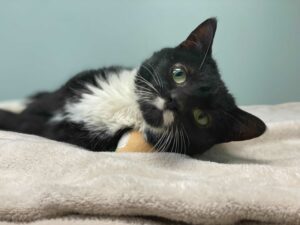 For Alvin, there’s no bliss without stress.

And maybe this is good news for hummingbirds and whirly wombats like you and me, too.

If I had to sum Alvin up in a single word — and I am deeply grateful I do not, for even the attempt would be a crime against a creature so kaleidoscopic — it would be this: full.

His life is stressful, but it’s also full, period, full-stop.

Maybe, for him, it’s just not possible to have one without the other.

Maybe that’s true for me, too.

Maybe there’s much we have to do, but there’s also much we get to do. Maybe they’re one and the same.

Maybe we can’t, shouldn’t, mustn’t try to pick the chips out of the ice cream.

So step into the circus, chipmunks and chipettes. Bring your biggest, boldest scoop. Life is full, and one frantic, fig-sized flyboy has invited us to the ultimate ice cream social in the sky.

Until we meet again, sweet sprinkle.

The mutually amazing society
Do it for the kitten
Epilogues: February 2022
Epilogues: December 2021