Anyone who tells you otherwise needs a bigger hug than most. 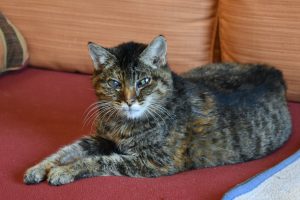 In the eternal high school that is Tabby’s Place, you might think that cats of a certain age — or, more accurately, a certain tenure — would bear certain airs.

Steven, a resident of Tabby’s Place since the start of the Fast and the Furious franchise (which is, I think, c. 1948?), might have reached the point of pure, invincible serenity, with no more surprises to fear, no more awkwardness to have to ook through.

Chewbacca, our main Wookiee since the John Quincy Adams administration, surely must have come to the place where he feels and knows that he owns and rules the school. 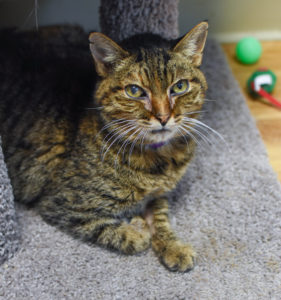 This is all quite false.

Someday never comes. The sooner we can collapse into the cuddly arms of our eternal amateurism; our forever freshmania; our graced-and-maddening, decades-long meandering childhood, the better.

Samantha is just the striped child who can help us.

At sixteen, with several years of high-quality Tabby’s Placing under her belt, Sam would seem a Senior if ever there was one.

She lives in the Lounge, arguably the ultimate upgrade in accommodations. This is the equivalent of having left a roachy dorm room that smells like cheese for a three-bedroom suite overlooking Central Park and containing an actual refrigerator larger than a music box. 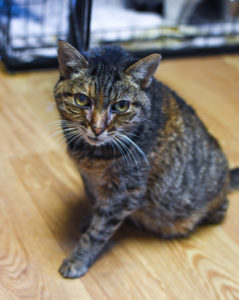 She has studied Humanity 101 and received extra credit for her patience with our foibles.

She has spelunked the depths of Social Studies and decided that they are worth further study.

She has taken all the 100-level courses in Don’t Pet Me, only to switch majors midstream and dazzle her professors in the 400-levels of Wait Please Do Pet Me A Whole Heck Of A Lot.

She has explored English, Spanish, French, German, and Latin in the hopes of finding a language by which to communicate with Shifty, only to accept that he only speaks Food.

She even took an elective in Field Natural History, which is to say she watched out the window as other cats were strolled about like small sultans by manservants and maidservants called volunteers. On further study, she determined that she’s a determinedly indoorsy type, and determined that this is no cause for shame. 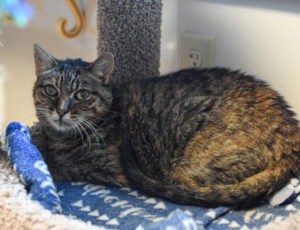 (Three cheers for all our fellow indoorsy types. Would that we should all share Samantha’s shameless at-homeness in her homebody body.)

Samantha would seem, by all counts, to have mastered Tabby’s Place, and adulthood, and the precious un-graspable peace of being Full Grown and Fully Oneself.

But Samantha, like you and me and the UN High Commissioner, is a freshman and a child.

Which is to say, she’s very lucky indeed.

Samantha, all elderly eyes and oceans of experience, is still fumbling her way along. She’s surprised every day — by Shifty, by shifts in the schedule of manservants and maidservants, by the angle of the sun in the sky, by the people who dare to brush her and beset her with their besottenness. She still shies away sometimes, or stumbles, or slinks under the couch to contemplate Samanthings. 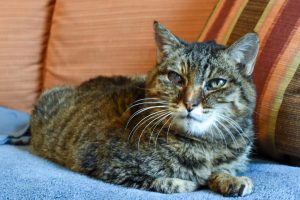 Unlike our particular form of freshmanity, Sam doesn’t worry so much about it. And unlike human freshmen, she — and every cat worthy of their whiskers — isn’t afraid to keep putting herself out there.

We all do this in fits and starts that, years later, can give us fits or — far better — make us cuddle our smaller selves with time-traveling compassion. Back in my literal freshman year, I had a zine, but I was a hesitant sort of riot grrl. Instead of smashing the patriarchy, I wrote about why Gary Oldman was cool, and compared FDR and Eugene Debs, and reviewed lipsticks by kissing the page twelve times. It was called Neverending Specialness. My classmates passed copies around during Bagel Fridays in Social Studies, and I desperately wanted them to woo-woo at my wobbly writing even as I played it cool.

(HA HA HA HA I MADE A FUNNY! As if I was ever capable of playing anything remotely cool, much less “it” itself!) 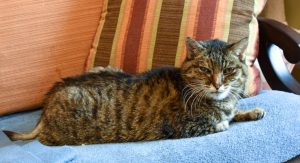 Neverending Specialness may have come to an end, but my freshman yearnings did not.

What am I doing here, if not kissing the page and wanting you and Samantha and all the saints and angels to sit with me?

Maybe the best thing all of us never-senior, ever-freshman, ever-belovable beings can do is remember to woo-woo for each other, at every age and stage.

No, kittens. I’m afraid you’re never really going to be Full Grown cats. But maturity and meandering and muddling and mirth can all go to the big dance together, and there need not be any shame in their game.

Class is in session. Let’s sit with Sam.