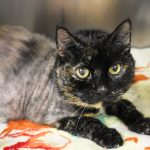 But only one of us is unafraid of the whole business. 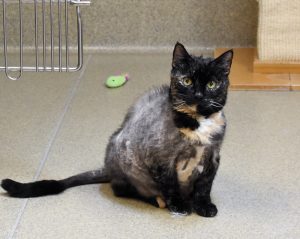 Tortoiseshell cats — “torties,” to the in-crowd of ailurophiles — are, without exception, magical and mysterious wonderbeasts. Where other cats are content with stripes and solids, torties are the living embodiment of floral jumpsuits with cheetah-print epaulets and neon piping, all of which somehow looks terribly cool and effortlessly understated and more than a little bit French.

This is the case even in the case of torties who trot through town au naturel, a la one Consetta Rosenberg.

Consetta came our way as one member of a wide wallop of New York Cats. Of all the cats Tabby’s Place plucks from hopeless situations, New York Cats are among our favorites. (True secret: they are all our favorites.) The New York City shelter system is vast and harsh and labyrinthine, a multitude of good humans doing the best they can with very bad odds and very limited space. 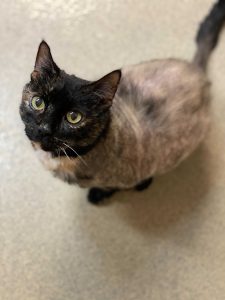 But wide open spaces awaited eight cats. As usual, we left it up to the New York shelter saints to select which cats would get to ride the train to Tabby’s Place. Before you could say, “I love New York!”, Consetta and her consorts were coming our way.

Now, it should go without saying that all eight New Yorkers are phenomenal, fabulous, and already utterly adored.

But kittens, I gotta tell ya.

There’s just something about Consetta.

It’s not just that she’s literally Tabby’s Place Cat #3,333, although that is colossally cool.

It’s not just that she is one long, living art film, soliciting our sweetness, then shrugging it off (“Sacre bleu, you thought I wanted toi to touch moi? Quelle moron!”), only to come back with soaring melodies of mushy mellow snugglage (“Je t’aime, je t’aime beaucoup, my cups runneth over with beaucoups!”) 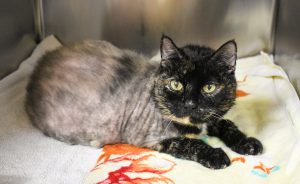 It’s more than all of that, and more than my feeble finite human mind can understand.

But Consetta’s glory is more than a little bit due to a massive chasm where fear “should” be found.

Consetta, despite skin issues (the real reason for her stylish shavedness), wears Parisian panache where sheepishness “should” dwell.

Consetta, despite having forgotten to pack her sweater from New York, has clearly remembered to pack a punch, and one we’d be wise to take. 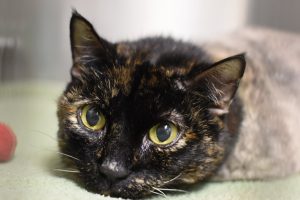 Consetta is comfortable in her own silly, splendorous skin.

Consetta is shameless in the good way.

Consetta trusts unreservedly that she is unwaveringly deserving of adoration.

Ours. Yours. Her Maker’s. Her neighbors’. (Greedy, growly Wilbur has yet to receive this memo, but Con’s working on that old con man.)

Consetta may be the first naked New Yorker to clothe us in courage.

Go forth with naked grace, kittens. And remember: one towering tortie expects you to be unafraid.

1 thought on “Naked and unafraid, Part 1”