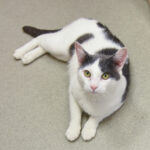 You probably assume the best part of this business is the cats we get to meet.

And you’re right, except you need to define “cats” a bit more broadly.

I’m regularly struck by the fact that we are surrounded by creatures of immeasurable dignity.

Tabby’s Place may look like a thirty-ring circus of compassionate chaos, gelatinous poultry product, and the ceaseless chasing of crinkle balls. (It looks like it, because it is.) But make no mistake: we walk among pillars of integrity, obelisks of honor, colossuses of character.

(They are also creatures who think the word “colossuses” is almost as funny as dropping a crinkle ball in your coffee cup, or licking the inside of your earlobe, or eating cardboard. But, dignity is complex.) 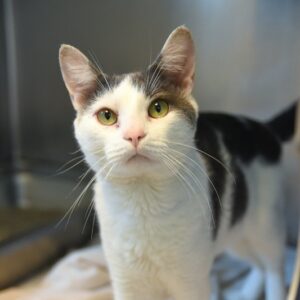 I am not, in this instance, speaking of my tireless colleagues, the staff and volunteers who give beyond the bounds of “everything.” These rough-riders with tender hearts are the brightest stars in the galaxy of goodness, expressing paraplegic bladders, and expressing undying affection for the anxious and angry, and expressing the love that makes Tabby’s Place the world’s preeminent Dignity Destination. They are the heroes and the healers, the haven and the hope, the answer to a thousand feline sighs.

They are not, however, the most dignified beings in this building. 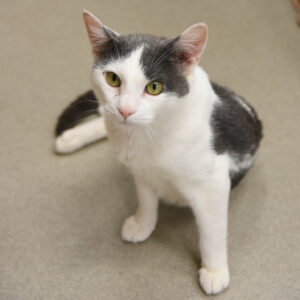 We are dealing with Charm, the crumpled little cat with starlight in his eyes. Although Charm has one of the most extensive vocabularies at Tabby’s Place (not even the late Wordle would challenge him at Scrabble), he just can’t spell the word “broken.” So he was injured; so he was ingloriously delivered to the Time’s Ticking List at a public shelter (let the reader understand); so he was what the untrained eye might call “alone in the world.”

Charm knew, as cats do, that he was not alone. Charm kept up his correspondence with the Big Mercy. Charm kept his eyes open, golden gazing-balls unwilling to take “bleak” for an answer. And although the cutest soot-and-snow cat in Philadelphia may have looked like he’d just fallen off a charm bracelet, Charm did not need to crank up the charisma.

And, at the eleventh hour — more like eleven fifty-nine and fifty-nine seconds — Charm’s answer came.

We will never know all the saints and angels and strange, exuberant individuals involved, but the story goes like this: from a seemingly motionless green meadow, an army arose. There were lovers and weepers and shouters and Facebookers and probably at least a bookie or two. There were the oddballs and the ornery, the loud and the outraged, hobblers and hopers and probably at least a Hobbit or two. 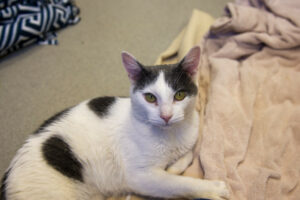 The golden gazing-balls saw them coming from many miles away. Dignity brings vision.

The Big Mercy picked up a seemingly empty cereal box and poured out a mountain of Lucky Charms. Suddenly, Charm’s skinny arms were dripping with jewels. The forgotten cat, the wounded cat, the cat with the least charmed life, was the cat with the most magic.