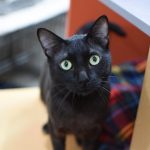 Anyone familiar with a particular movie franchise will have heard of different periods of geologic history, especially the Jurassic. Some may also be aware of the Triassic. Along with the Cretaceous, these 3 periods make up the Mezosoic Era.

I’m probably losing you, so let’s just go with this: these times were all long enough ago that George Lucas would have had trouble squeezing all the “longs” into a suitable scroll in a readable font for film adaptations. 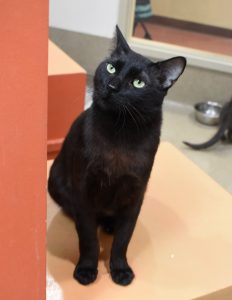 Get this, though: even longer ago, there was the Permian period (you might have heard about the mass extinction that brought that period to a grand finale and paved the way for Steven Spielberg to thrill us all for decades, thanks to the creative genius of Michael Crichton). Before that, well, our homey planet that orbits the sun that warms the cockles of our hearts, along with toe beans galore, has gone through a lot!

There have been eons and eras and periods that have marked and marred and made this world what it is today. The second-to-last period of the Paleozoic Era was the Carboniferous Period. This was the period just before the Permian, and it was TEEMING with life, and it was maybe just a tad on the humid side. There was so much plant life that, in dying off, it left us a way to warm ourselves, run trains, and have gagillions of cook-outs because those plants died and…eventually…turned into coal.

If it’s all about the coal, then why is it called the Carboniferous? (Please bear with me! I promise, there be point here!) Because coal is a form of carbon. (Are you starting to see? I know one kitty who’d love to explain even more than this Kitty, if only he could).

Let’s take a step back and ask a simple question: what color is coal? BLACK! Simple enough, but isn’t coal carbon? YES! Then, what color is carbon? BLACK! Okay, no. Well, yes. Actually, carbon, because it’s awesome, comes in many colors (take that Joseph’s dream coat!). But there is only one Carbon at Tabby’s Place, and that Carbon is black. Pitch black. That Carbon is also teeming with life and energy, vim and vigor.

Ask him. Then try to get him to stop explaining. The rest of us will wait.

Okay, done waiting. Carbon is not only his very own geological epoch — no wait, that is a thing and that’s not Carbon’s thing. Carbon is not only epic unto himself (yes, that’s better), he is a work of art. There’s a word in paintingdom that describes the use of contrasts: chiaroscuro. Words like “bold” and “volume” and “shadow” all come up in various definitions. That’s our Carbon. He’s also, as you might be aware, a duck.

Carbon Quackenbush Rosenberg is “a roving glitter bomb of joy.” And, believe me, if all the world’s paleontologists and all of Italy’s masters got together, none of them could have found a more suitable description of Carbon than what our very own Director of Development and Blog-Leader extraordinaire came up with about this cat.

Carbon head-butts waists and arms and anything else he can reach just as hard as he can because he HAS TO. All the while, he can’t hold himself in one spot for long. He’s too zingy and he has to get his little Carbon footprints over every inch possible, all the while quacking with vigor and urgency. 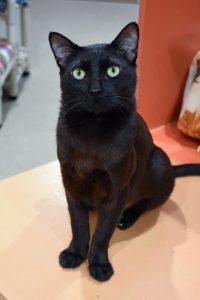 Carbon’s intensity would outshine the sun if his black coat reflected color instead of absorbing it.

Boom is not best pleased with this intensity.

Adam is mostly indifferent to this constant movement and high-octane energy source.

Like the earth, not only will we all survive this neo-Carboniferous period, we will thrive in it. Any doubts? See what Carbon has to say about it.