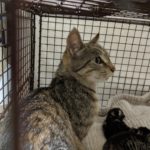 Mama Disney gave birth outside where she had shelter and food, but a brutal heat wave threatened the well-being of this little family.

That’s how she ended up in the air-conditioned comfort of my spare bedroom. 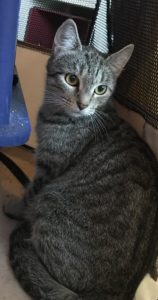 Her three tiny kittens, beautiful brown tabbies, looked just like her.  I love kittens, but it’s the moms who deserve my compassion the most.  Their pasts are often checkered with misfortune, and their futures are usually less secure than those of their easily adoptable babies.

Fostering a feral family isn’t easy.  Disney wasn’t aggressive, but she was scared and distrustful.  Every time I entered her room, she greeted me with a menacing growl.  Opening the enclosure door rated a hiss, and delivering a bowl of food, a swat.

Early on, Disney did most of the work, and I focused on keeping her comfortable and monitoring the newborns.  When they became more active, I built a small enclosure adjacent to their pen and enticed them outside for more space to chase toys. 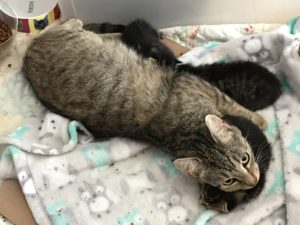 With a feral mom, it’s especially important to socialize the kittens early, so they develop a trust for humans.  I can only imagine their confusion observing mom’s obvious dislike for me alongside the temptation of the fun toys and games I provided.  During playtime, Disney’s expressive golden eyes held a mix of suspicion and appreciation.  I understood her emotions and the dichotomy between love for your children and the fatigue that comes with mothering. 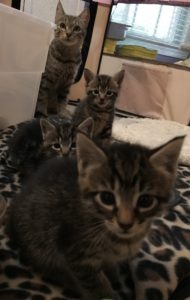 On days I was able to open the windows, I watched Disney stand solemnly and tip her nose up to catch the breeze.  It had to remind her of her happy place, the outdoors, and probably made her wonder if she would ever return.  I tried to imagine what it would be like to be tightly confined in this strange inside place after a lifetime of no boundaries outdoors.  I’d heard this was not her first litter, and that all but one of her last kittens had died.  She was fortunate to live on a farm where she was fed, but life outside was still dangerous.

As the days passed and the babies grew, I sensed Disney becoming more and more unhappy and withdrawn.  I started giving her pep talks, counting down every day until her freedom. Because feral moms are a flight risk, there was no way I could give her the kind of space her kittens enjoyed daily.  While they frolicked and wrestled each other, Disney crouched in a corner.  Her misery was a constant backdrop, despite the fun I was having with the kittens, who were now a cute age, sporting fun personalities. 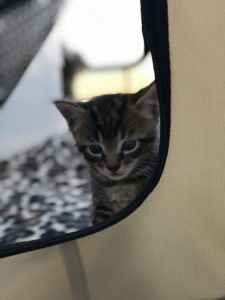 By the end of her confinement, Disney communicated her impatience by rejecting food and ignoring the litter box.  I distracted myself from her mood, figuring out how to get her into a carrier so that I could take her back to Tabby’s Place for her spay and release. When the day finally arrived, I hoped she could not sense my anxiety.  It’s always hard to separate the mom and babies, even though I know they will all be okay.

I placed some treats in the back of a carrier in her pen and sat quietly watching.  She’d been cooperating with this strategy for days now, entering immediately to eat her snack.  Today, she did not move.  I waited.  After ten minutes, I tried reason, imploring her to cooperate and reminding her it was her big day.  She ignored me.  I took a deep breath and looked into her eyes, sensing she understood what I was saying, but as much as she wanted to leave, it was also hard for her.  I could feel her hesitation.  Mom to mom, I spoke to her from my heart. 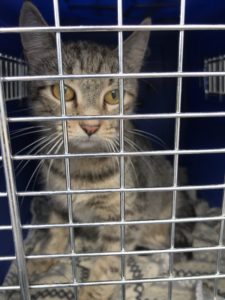 “Mama, you need to go.  You’ve done your job.  I promise I will take care of your babies and make sure they have good homes. You are unhappy here, and I want you to run free.  You will never have to go through this again.”

She seemed to consider what I’d said.  Finally, she took one tentative step toward the carrier and then another.  I reached for the door and closed it softly behind her.

As I carried her to my car and drove her to Tabby’s Place, I spoke soothing words of encouragement along the way to her future.