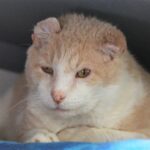 If Rent was right that we “measure our lives in love,” Tanner lived at Tabby’s Place for a very, very long time.

Maybe that’s why we miss him so much today. 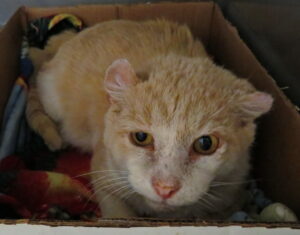 By the time Tanner tumbled our way in May, he’d already been well weathered. More thuggish cats had battered his butterscotch body, leaving him FIV+ and decorated with distinctive dumpling-esque ears. Ancient but unafraid of age, Tanner wore all of his years. To top it off, the old veteran was deaf.

But Tanner heard the music.

The music was trickling out of Suite FIV like a shy shimmering river. Strange songs, timeless songs, soothing songs reached Tanner as he settled into Quarantine, settling it in his mind that he was going to make the best of this deployment.

After all, Tanner had been sent to look after us.

His was a peacekeeping mission, all the more powerful for giving us permission to think we were the rescuers. Like a good Opa letting his granddaughter believe he can’t make his PB & J alone, Tanner gave us the gift of being needed. Like a good general, Tanner accompanied us into the front lines of our fears and feelings. Like the best kind of friend, Tanner gave and received without weighing and measuring.

With acute hearing, Tanner tuned his life to the music.

Even before he let us mush him with our civilian melodies (although he became a decorated mush-maestro), Tanner found his love notes on the staff of Suite FIV. From the moment he stepped onto that piano, his life burst into song.

This was the symphony he’d sought all his many years. This was the orchestra he’d ached for. This was the jubilant jug-band that had been waiting just for him. These were the carols that made all those weary winters worthwhile.

Everything in Tanner’s life had led him to today.

To say that Tanner loved the other cats in Suite FIV would be like saying that “O Holy Night” is a kinda nifty little ditty. Tanner loved his neighbors with the force of the mystery that turns the planets. Tanner loved Audrey the way Paul Newman loved Joanne Woodward. Tanner loved Shishito the way Guy Fieri loves flavor. Tanner loved Doby, and Humphrey, and Clarence, and Sky, the way life loves laughter.

Tanner loved to love the way music loves to heal.

Every day in Suite FIV, Tanner’s heart did arpeggios even as that old butterscotch body did gymnastics. He wrapped himself around everyone who would consent to being wrappable. He rapped fresh beats bespeaking his besottedness with them all. He scrapped all self-pity in the wealth of warmth.

If there was a certain urgency to his loving, maybe it’s because Tanner knew the hour was late. Although he had several brushes with adoption, the old veteran always knew this would be his final post. A colonic mass crept up quietly, only to crescendo in late December. The final lyrics of mercy were too clear.

Like that good grandfather, leaning heavily on his cane, Tanner climbed the mountain of 2022 with us. But as we all looked over the green fields of 2023, he knew what we didn’t want to believe. He couldn’t accompany us any further. The music of the spheres was calling.

Surrounded by staff who adored him, the gentlest veteran passed from this world to the Great Peace.

There is a whole note missing from our staff today, a dumpling-eared void where a butterscotch cat used to be. Tanner was technically only with us seven months, but time is elastic when love is immeasurable.

We gave Tanner all of our love. He gave us even more. And as his song settles into our bones, he gives us hope.

If an ancient cat can come into his kingdom in the last year of his life, no one is too old for a new song.

If darkness can split into light just before sunset, the hour is never too late.

If you can still hear Tanner’s song, love is stronger than death. 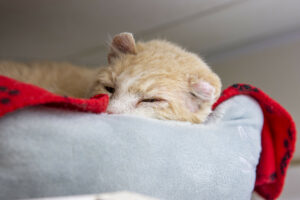 Look! There he is, in Audrey’s satisfied smile. Oh! I hear him, in Doby’s dawning courage. Yes! It’s Tanner, trilling strong and true in us, every time we embrace the aching, every time we pour ourselves out not in teaspoons but in gallons.

Tanner, truest of hearts, we will miss you as long as we sing. But we will sing a new song because we were loved by you. Until we meet again, most valiant, we salute you.

The Coming of Light
by Mark Strand

Even this late it happens:
the coming of love, the coming of light.
You wake and the candles are lit as if by themselves,
stars gather, dreams pour into your pillows,
sending up warm bouquets of air.
Even this late the bones of the body shine
and tomorrow’s dust flares into breath.