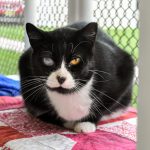 What did Humphrey see with his marble eye?

What will we see now that he’s passed from our sight? 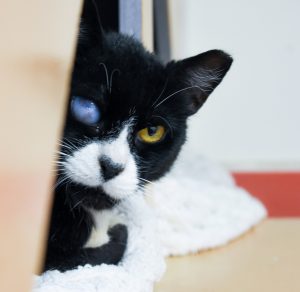 If ever a cat was a work of art hiding in a slab of marble, it was Humphrey. It would take many Michelangelos, with many gentle chisels, but sure enough, fear by fear, the masterpiece was revealed.

It turned out the masterpiece was a master of vision.

First, though, Humphrey tried to go unseen. Plucked from the street with FIV and a bulging eye, the old man carried old scripts into his new life. He fear-peed at the hint of affection; he hid under his own history; he mutinied against every mercy.

He couldn’t see that the pummeling had stopped.

He couldn’t see that the past had been overpowered.

He couldn’t see that he’d had a change of address, not even though everyone around him addressed him by name.

But to have a name is to have a home, and Humphrey had come into his own Casablanca. We yearned for him to see that this was the beginning of a beautiful friendship. 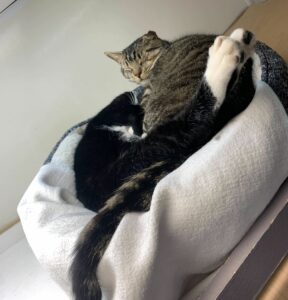 Even with zero Bogart bravado, one eye like a psychedelic marble, and fifteen-plus years yammering down his halls, Humphrey was everything Humphrey needed to be at Tabby’s Place. He won ten Academy Awards on arrival. He was the Treasure of the Sierra Madre. He was the David, the Thinker, and the Winged Victory, all tucked inside one shy tuxedo slab.

And eventually, in the classic film where he’d just been cast as Cherished, he would see it.

He would see it in the eyes of Crinkle Bob, wrinkling with delight. “Here’s lookin’ at you, kid!” Crinkle crowed, and not just once, and not just once an hour. Loving someone all the way home is tireless work, too tedious for hearts that don’t crinkle. But Crinkle was King for a reason, so he was willing to reassure Humphrey as many times as necessary.

Humphrey would need slabs of reassurance before he could see it.

And that’s OK, because Tabby’s Place lives for the love that must be believed to be seen. 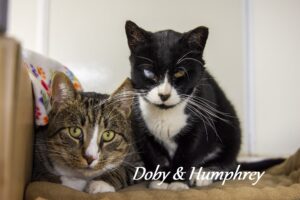 Humphrey would see it in the dawdling of Doby, Suite FIV’s most patient pierogi. Sometimes the truest friends are the ones who will share their silence and their slowness. No words are necessary when breath speaks to heart; no fear is permitted when you need not perform; all becomes clear, even to marbled eyes, when time turns to tenderness.

Humphrey would need slabs of time before he could see himself.

And that’s OK, because Tabby’s Place is one gigantic mirror. 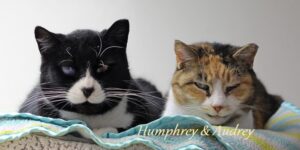 Humphrey would see flashes of Humphrey in the Stubborn Ones. Spindling around on long legs, cinnamon-rolling themselves into sillies just to get close, these gawky baldish cats could not bear to stay away.

But answers were unfurling, and slabs of stone were falling. Humphrey was starting to see.

The statue took a few furtive steps in the light of others’ sight.

Shucks! That angelic administrative assistant…she sure was devoted. She made even Subcutaneous Fluid Time feel like the time of his life. What did she see in an old codger like Humphrey?

Good golly! That Audrey-cat…she adored without asking anything. She was a hundred thousand Hepburns of grace. Prettier, too. Why would she choose Humphrey over hunkier lunks?

Gadzooks! That volunteer, the one who always brought a picnic blanket for extra-long visits…she sure was smitten. Of all the solariums in the world, why would she walk into Humphrey’s?

Gee willikers! All those creatures, the tall ones and the proud ones and the nervous ones and the singing ones…they sure didn’t seem to be push-awayable. Not even swayable. They weren’t going anywhere. They were coming back, over and over again, and they kept getting more excited, not less, to see the same old cat. They seemed to see a masterpiece.

Humphrey turned to Doby. “I think I might be a masterpiece.”

What has been seen cannot be unseen.

At last, Humphrey was home.

He chucked out the old address labels — “Humphrey Nobody, c/o Street” — and ordered a new set: “Humphrey Rosenberg, c/o Love.”

Now, he was living in Love’s care.

Now, he would live to help everyone else see themselves, too.

And just now, his fifteen yammering years caught up with his kidneys. 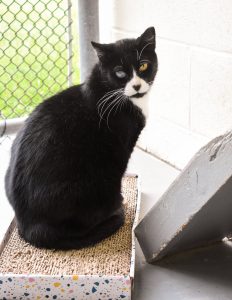 Our vet staff was valiant (valor being their default setting), but the hour was late. With clear-eyed compassion, our weeping team gently delivered Humphrey to his next address.

Tonight, I believe Humphrey sees more clearly than any creature on earth.

Tonight, I believe he is more fully-alive than ever before.

Every night, I believe we’re only alive when we live in Love’s line of vision.

Humphrey understood our fears. We all drag around our own duffel bags of Past. Those soggy scripts warn us not to let ourselves be seen, trying to protect us and keep us safe in stone.

But Humphrey’s marble eye saw the secret. And tonight, beyond the veil, he would yearn to see his friends to freedom.

In memory of Humphrey, may we let ourselves be seen. May we be masterpieced by mercy. May we become mirrors to show other cats (of various species) their splendor.

Until we meet again, most splendid Humphrey, you meek masterpiece, thank you for seeing us, and knowing us, and loving us clearly.