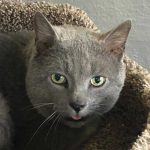 In a world with too much anger, it’s a brave thing to just be scared.

Sometimes the best way to let your little light shine is to let it publicly tremble — or flash, as the case may be. 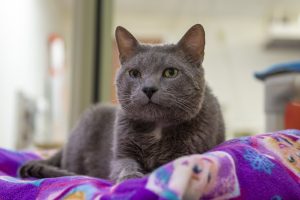 No matter who you ask, Flash is one of the best and most brilliantine grey boys ever to enter the annals of Tabby’s Place (unless you ask Olive, but Olive has religious objections to describing cats as “acceptable”, much less “brilliantine”).

His fur is the kind of mink that makes your fingertip sink up to the first knuckle, a plush bear built entirely of bashfulness.

His eyes are miniature moonchildren, beaming forth a quiet light that’s no less powerful for being pale.

His noises are gnarly, the work of severe chronic laryngitis and/or too many nights yelling at his favorite basketball players on TV. (They actually can hear him, you know, and his yelling makes them gooder, even as it makes his voice gruffer.)

His name is honesty strung together letter-by-letter, as he moves like light incarnate, faster than your mind or meandering feet or misplaced hand can keep up. 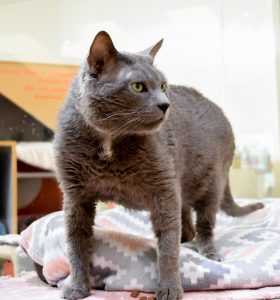 His story is standard — plunked down at a Jersey shelter, mournfully belting out “Jungleland” with Bruce behind bars until the Tabby’s Place bus came calling — but his flicker is matchless.

Where you or I might try to hide our fears, wrapping them in bubble wrap and bumbling them away behind doors we think will stay closed (they won’t), Flash feels the fear and lets it shine.

Staff livestreaming from the lobby, complete with kittens? Feel the fear and flash it forth: smack the nearest volunteer repeatedly with your minky magical paws.

Same infuriating staff attempting to express Olive’s orblike bladder, causing the tuxedo terror to scream Very Bad Words that cannot be repeated on this family friendly blog? Feel the fear and attack the expresser, causing Olive to express herself all the more vigorously, causing life to flash before everyone’s eyes at once. 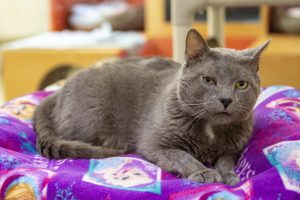 Bellamy being all Basset Hound-y, hanging close to your tail as you tremble through the lobby? Feel the fear and freak out with flash and panache, running and yelling and announcing, in every way your great grey heart knows how, “I AM UNSETTLED BY MY EXISTENCE.”

We all are, boss. You’re just the one brave enough to bellow it, even if it means bellowing at Bellamy, breathing flames at every real and imagined catastrophe, until somehow your terrors are tamed and the sparks fly upward into tickling tendrils. 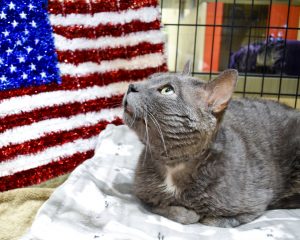 You are Flash; you are fear shrink-wrapped in mink. But you are also a great, victorious dragon with a golden heart and the courage to be unapologetically afraid.

Let your light shine, even when it shudders.

Be the beacon that reminds us it’s safe to be scared here.

Help us pick out the most flattering ‘fraidy-pants.

And somehow, we’ll all find ourselves at least a little more settled into this strange and sparkling existence we’ve been given. Even when life itself mobs our mere-mortal hearts. Especially then.