Donate
Fed by other springs 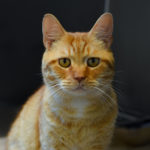 I hope today gives you what you want.

But I trust today will give you what you need. 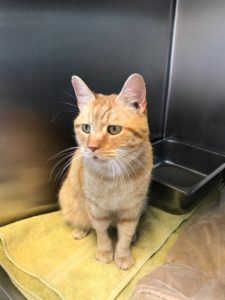 Before you groan and holler that I’ve been scrolling through too many inspirational Instagram feeds (which would be accurate), bear with me. Or, far better, bear with Stanley.

This year has not been kind. (Stop the presses. Call the Pentagon. Clearly I’ve made a discovery here.) Neither has it been exclusively cruel, and the greatest sadness would be for us to throw it all away. But not a soul among us could say that 2020 has given us everything we wanted.

I will spare you the sordid details of Stanley’s past. Suffice to say he was “known,” but not known; seen, but not beheld; owned, but never truly belonging. As an outdoor cat, bell pepper-bright Stanley technically belonged to a family. But after three weeks missing, and a longer spell suffering an untreated breathing issue, he was a long, gasping way from grasping what he needed. 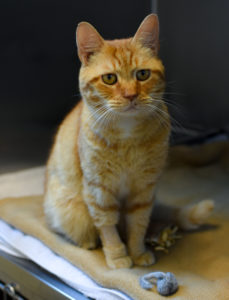 Through a happy series of accidents, Stanley made his way to Tabby’s Place, and on to Dr. Fantastic (the collective name for our trusted team of emergency and specialty veterinarians). There would be intensive care for his upper respiratory infection; extensive workup (still ongoing as of this writing) for his bigger breathing battles; and more love than this orange extrovert knew how to shake a Dorito at.

We were not, could not be, Stanley’s family of origin.
We did not, could not, replace the people who had essentially rejected him.
But he did not, would not, pout in a puddle of self-pity over it.

With a purr that you can probably hear from wherever you’re reading this (be it Flemington or Zanzibar or the moon), Stanley embraced the love that was embracing him.

We may not have been his first choice.
We were certainly not what we expected. (We — the collective Tabby’s Place human community — are generally not what anyone expects.)
But we are his, and he is ours, and he is accepting every bit of belovedness that’s here, rather than holding onto anything that’s not his to be had.

Would that we should be so openhearted. But you know and I know: while cats will leap and play and lap up every delicious drop of every fountain that springs up in their path, we can be standing in the middle of the Mississippi and dying of thirst.

There is so much validation to be had, but if it isn’t from the particular places we expect, we feel bereft. 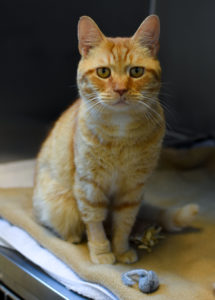 You may have 52 dear friends tell you that your poem about potatoes was powerful, but if you don’t hear it from your Dad or your kid or The Paris Review, it’s not enough.

You may have all of your cousins and confidantes wish you a blessed beautiful bountiful birthday, but if you don’t hear from That Guy, you languish and worry that you’re unlovable.

Everyone at church or school or the Senate may compliment your new haircut, but if your best friend says something slightly snide, you start wearing hats.

And all the while, love is pouring down in buckets over our heads if we’ll only believe it and receive it.

We can’t plan or propose or predict where our sustenance will come from, especially not in years like this. (Correction: may this be the only “year like this” in the history of years.) But we can trust — with Stanley — that it will always come.

Our thirst can be quenched from unexpected springs.

Even the fountains of fun and purrs and titanic tenacity that are safety-orange cats.

So I repeat: I truly do hope you get what you want today. But I fully trust that you — and I — will find what we need. Let’s be open to the love that’s right before our eyes, bread for the journey even if we called for cake. Don’t you dare forget your belovedness, kittens.

1 thought on “Fed by other springs”