Donate
You are not the last of your kind 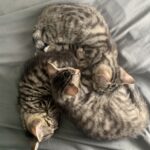 If you ever wondered if yours is the last heart that bleeds and sings, often at the same time, be of good cheer: it is not.

You have an entire village with hearts shaped like yours. It’s called Tabby’s Place.

Now, we may not look like the holiday village on your Grandma’s mantel — you know, the one with the poly-fill white “snow” and the Victorian cottages, born to be toppled by cats. (I once witnessed Villager #3 being carried to his doom in the mouth of an orange tabby.)

We’re more like Sesame Street, all orange and blue and shaggy and googly-eyed, with individuals who sleep in trash cans, and primary-colored best friends who share each other’s stripes, and odd birds of multiple species.

We are your village.

And in the most vulnerable season, we are here with you.

Everyone gets extra-tender in late December, but villagers like you and me, well, we’re used to feeling a little fragile all the time, aren’t we?

No porcelain angel ever shattered so easily as a heart given to a cat, ten pounds of bone and sinew and soul and stardust gift-wrapped in soft fur and an eighteen-year lifespan.

They arrive with shiny packages for us: love beyond all telling. Best friendship that bursts all safe bounds. Unconditional love that snaps cynicism like a cracker. Laughter and outrageousness and odors and vapors and colors of glorious variety.

Hourglasses with unknown volumes of sand.

What are we doing, loving these time bombs of tenderness? 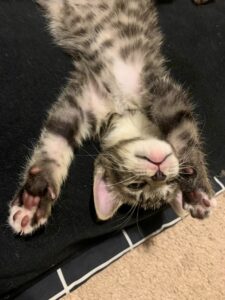 Of course we’re fools. The best creatures always are, in the tradition of holy fools, Shakespeare’s clowns, pet monsters and muppets and saints and angels and — most of all — kittens.

And that’s why, in the village of Tabby’s Place, the mayor is always a kitten.

Kittens love with their eyes open and their hearts unable to close. After newborn gerbils, incumbent senators, and seventh-graders, kittens are perhaps the most vulnerable creatures on earth. But they wear their wispiness like a jaunty red hat, pompom and all, and such is their power.

I will never blame anyone who finds it “too sad” to tumble head-first into such stories.

But I will never be able to toughen up the truffle-walls of my heart. And neither will you. And that’s why we’re Decembering together here at Tabby’s Place, remembering kittens from July, and cats we lost ten years ago, and all the reasons that transcend “reason” and give us courage to love.

Although they couldn’t see out of their ruined eyes, Wynken, Blynken, and Nod saw far beyond our sight — heck, far beyond the capabilities of the Webb Telescope — when it came to courage. Our micro-mayors, like all holy fools, were set on mending: mending the world, mending our hearts, mending each moment as it came.

They were not afraid of winter.

They were not afraid of tomorrow’s secrets.

They were not afraid of their achy eyes, or the whispers of “surgery,” or the fact that everyone they loved — and they loved every Tabby’s Place villager without reservation or prudence or even much of an introduction — would someday die.

They were hearts shaped like cats, and they were here for us.

This is one of the great ironies of our village. We are “a sanctuary for cats from hopeless situations.” We are the doers of noble deeds, the rescuers, the healers, the light-bearers. This is what we tell ourselves, and it’s true, as far as it goes. But in our honest hours — and December demands honesty like a six-year-old demands Legos — we remember: we are the recipients.

We are the receivers.

That’s why our village feels a lot like paradise even when our soft hearts are breaking.

In this particular storybook, three little kittens lost a few eyeballs but found their mettle, stole a few (dozen) hearts but gave galumphing gallons of grace.

They were festively fragile, sugar cookies with steel in their spines. They couldn’t survive without us, but they were stronger than we were. They needed us every hour, but they took care of us effortlessly. (Wynken offered to blow up the Death Star, anytime. Blynken noted that he shares a name with the Secretary of State, and could stand in for him on particularly delicate diplomatic missions. Nod just wanted to nap with us, rendering him the most powerful kitten of all.)

They survived, thrived, and found forever homes, where their mission continues today. (Blynken was blessed and blissed to join the home of a staff member who shall remain anonymous, except to say that she is Tiana and she is utterly awesome.)

They told us the truth that keeps all the candles lit in this village: it’s okay to be fragile. 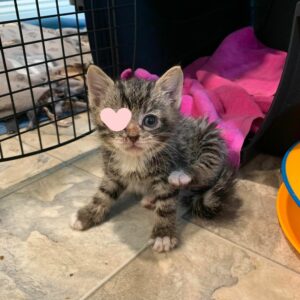 It’s magnificent to be vulnerable.

It’s wonderful to walk around with “Handle With Care” stamped on your forehead.

Like bulgy-eyed kittens and bombastic scrappers and wizardly wizened old cats, you are all of the above, whether you own it or not.

You have to be fragile if you want to be treasured.

The gates to the Tabby’s Place village are always open, but you can’t step in without a heart that bleeds and sings.

1 thought on “You are not the last of your kind”