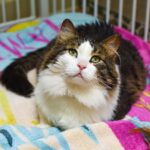 There’s a very tiny squirrel with no tail in my local rodent community.

Not a nubbin. Not a shnubbin. Not even a tuftlet of a hint of a bygone blump.

She’s the runt. She’s the weirdo. She’s in a perpetual state of joy. She’s undeniably in charge.

We are collectively, irrevocably, exuberantly in love with her. 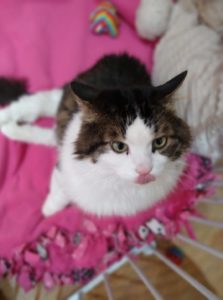 It’s a topic of frequent conversation at Tabby’s Place: the scrappers and the ragamuffins, the strange and the peculiar, the jumbled and the more-jubilant-than-they-have-any-“right”-to-be, carry a special currency.

It’s not that we’re gobsmacked by Anka because his back legs don’t work.

It’s not that our hearts are under Rose‘s rule because she’s incontinent and otherwise Exceedingly Odd.

It’s not that we melt for Mishush because her tummy has tackled mysterious monsters of diarrheal deviance.

It’s not that we adore Luna more because she’s been through Skin Wars that would make ancient Spartans shudder in their armor.

We would — of course — cherish and admire and lift high the banners of each of these cats if they were perfectly ordinary, kissed by the good fairy with the gift of unremarkable medical histories. 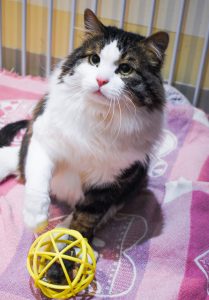 But we love them, esteem them, and quite frankly want to be like them because of what life’s doings have done to them.

Anka, struck by a car in a foreign land, saw his swaggering, debonair days disappear to the tune of burned rubber. The carefree cat who undoubtedly called all the shots in Ankara was suddenly at the mercy of people. Fortunately, this world lives another day, every day, because there are merciful people stationed like scrappy saints in every stairwell.

And so Anka was vaulted by kindness to the status of All Time Valentine. Kindness slingshot him across the ocean; kindness scrambled for solutions to his intercontinental complications; kindness greeted him at Tabby’s Place, and it hasn’t stopped greeting him with awe and affection each new morning.

Anka lives his life as one sizable, swashbuckling “thanks.”

There’s no self-pity here.
No loathing looks in the mirror.
There’s nothing but a sense of continual bounty, a bottomless hunger for the feast that he fully expects to keep feeding him miracles and wonder and fish mush.

If he has one quibble, it’s the fact that his assorted manservants and maidservants do not also see fit to feed him live cats. But even All Time Valentines get to keep one quibble apiece.

Just beyond Anka’s pen (erected so as to prevent him from remedying his quibble; witness any cat approaching within six inches, and you shall see The Siege Of Stalingrad and The Battle of Thermopylae and Gettysburg and also whatever exactly was going on in the Ramones’ Blitzkrieg Bop), Rose is the eternal radiation of unsinkable sunshine. 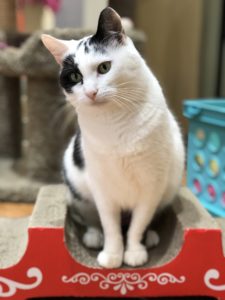 I don’t mean our sun. I don’t mean a generic K-star. I mean all the sunshine that ever shone in any starcluster known, unknown, or existing only in the mind of J.R.R. Tolkien.

Rose, too, was rocked by an unrighteous vehicle, leaving her incontinent and “unadoptable;” Rose, too, was rocketed to the most peculiar patch of humanity that ever attempted to do good in this world, eat too many Veggie Straws, and learn a little Elvish. (I can neither confirm nor deny that multiple staff members have attempted to learn and unironically use Elvish.)

And Rose, too, took the wilted flowers of her past and made a meadow that won’t stop blooming.

A zesty pinball of hyper-powered love, Rose goes from zero to supernova at the faintest aroma of flowers, by which I mean “potential affection.” She’s a one-woman mission to mend whatever ails you, and by golly she’s gonna love the loneliness out of your lap or your afternoon or your life. 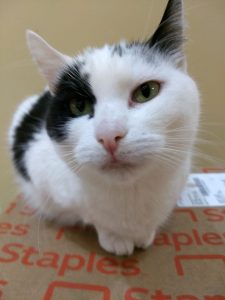 Merry-maker Mishush may never have suffered an external accident, but her innards are a hundred-car pileup. Just imagine what might happen if you ate fourteen large velveteen hearts of sugar-free truffles, and you’re on the right track to Mishushery.

But where you or I or I might feel like excrement, Mishush makes the most of the materials on hand. In her manic, never-panicked eyes, it’s all just fertilizer. If Rose has the Lobby, Mish claims Suite A. The Garden of Healing will have its way with all of Tabby’s Place, and the tiniest, toughest-lucked charmers have their spades and trowels.

(You just need to bring your washable sweats and towels, since Mishush administers her healing directly through your shoulder, and whilst she’s perched there, sometimes things happen. But, in the venerable words of my mother, “that’s why we have washing machines,” and things can unhappen.) 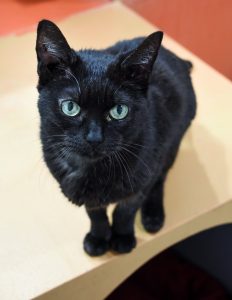 And Luna, the itchiest cat who ever came from Kansas to the great goofball state of New Jersey, may have the one spirit to rule them all. It wasn’t too long ago when our watercolor Valentine of a cat lived in bright red pain, one hundred percent of the time. When we met Luna, her own skin was so surly, she could scarcely bring her dainty mouth to the bowl to eat.

You don’t forget pain like that, not even after Tabby’s Place rearranges several planets and makes deals with several saints and angels to heal you.

You don’t forget pain like that, etched into your body in places the mind itself can’t access. 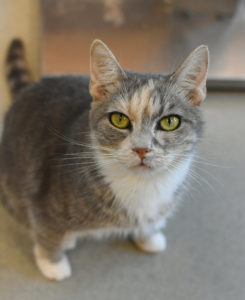 We don’t fall over ourselves for our feline Valentines because they’ve been through so much, but because they’re the hardy hearts who just might heal our own.

It’s possible to be pierced and punctured and let it crazy-quilt you into pure, potent love.

It’s possible to be hurt and hollowed, ravaged and wronged, and emerge as all heart.

It’s possible to be vanquished by the vicissitudes of life, the ordinaries and extraordinaries that attack us all, and come forth as a Valentine.

It’s possible for squirrels, and cats, and us.

And it’s more than possible that I choose you as my Valentine. Yes, you: the cats and humans and elves and assorted exquisite oddballs reading this.