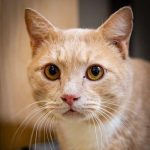 You need to know that we have a situation.

OK, Tabby’s Place actually has several situations. There’s Caesar dressing that expired in 1997 in our fridge; no one will claim the empty Tupperware on top of said fridge; and we have all been permanently branded Crazy Cat Individuals. Also, the cats in Suite C collectively outweigh the planet on which we live, which could become an issue.

But back to the situation at hand.
We’ve been Knicked.

This word may evoke a mild wound. That would be wrong. We have not been nicked or nipped or nibbled delicately like crustless cucumber sandwiches. We have been Knicked.

To know one Knickers Rosenberg is to swiftly get Knicked. Every cat is glorious, but this particular gentleman is so extraordinary, so spectacular, so intergalactic and out-of-this world, that his fast friendship does something to you.

Knickers is not from around here. Technically, he was found about thirteen inches away from Tabby’s Place, on a farm that is very much Around Here, but technical doesn’t mean true. Clearly, Knickers is from the great planet Exuberance, where the air is thick with joy and the gleeful, giddy love flows like nectar from the trees.

That’s how sweet and scrumptious Knickers is. He is also, incidentally, The Actual Cutest Cat Ever Born, but that’s so secondary it’s hardly worth mentioning.

But there’s another “also” I must mention, the source of our situation.

He may look like a circus peanut and love humans like it’s going out of style, but Knickers is also every cat’s knightmare. (“Knightmare.” You’re picturing Rufus-style rampaging and roughhousing. You’re wrong. Picture Rufus-style rampaging and roughhousing if Rufus was 80 feet tall, made of flames, and able to shoot dinosaurs out of his eyes while biting you with swords.)

No beating around the bush here, kittens: Knickers is one of the most violent, volatile, out-of-his-ever-lovin’-mind cats we have ever encountered.

He is the sweetest individual in the history of individuality, the greatest force of friendship since Mr. Rogers, a joy-bringer so jumbo, he makes you remember that there is good and hope and truth in the world, and that everything will be okay.

He is also the grandest goofball to have landed on this planet. Don’t believe me? Just watch:

(That’s our ace, awesome, almost-new-as-Knickers Sanctuary Associate, Bree, behind the camera and in the audio. Thank you, Bree!)

“Goofball.” You’re picturing Pee-Wee Herman. You’re wrong. Picture Pee-Wee Herman if he became the Provost of Princeton, all while riding his bike and painting a fresco of Large Marge.

(That’s our ace, awesome, eleven-years-here Senior Veterinary Technician, Denise, behind the camera and doing the Knickers training there. Thanks, Denise! Also, “Knickers training” shall henceforth be known as “Knick knacking.”)

So you see that we have ourselves a situation.

We have been Knicked for good, which is very, very good.
We have been known by an alien cat who knows many things, knows us all too well, and loves us all the same.

All he asks is that we return the favor.

We have been pushed to the edge of our feline behavior wisdom, and then over the edge and tumbling down into the abyss of mystery, trying this and that and the other thing to get Knickers cat-tolerant enough to live among his species.

One thing’s for sure: he’s not going back to his planet.
One thing would be perfect: he could colonize a forever home as the Only Cat, which would be better than having his own planet.
One thing’s truer than true: we’re exuberantly, effusively, enthusiastically grateful for the honor of getting Knicked.