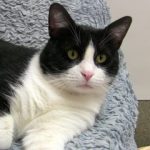 It is my sweet privilege to bring you a great many great and glorious things on this blog. But what you are about to experience is surely a peak Felis Catus moment.

Although we always thrill (read: squeal and shriek and spin in our spinny chairs like small children) to receive updates from Tabby’s Place alumnae/i, there is something summa magnificent about updates from oldies.

I’m talking cats who were adopted before the time of TikTok.
Felines who left the building before we ever heard of Bad Bunny, Keto dieting, or the gig economy.
Strange little purring things that predate even the first episode of Stranger Things.

There’s something about knowing a cat is still thriving, still cherished, and by all counts better than ever, many years after leaving our doors, that thrills (read: causes giddy-gumdrops jubilation) our very hearts.

So if this were simply an update on a cat adopted pre-5G, that would be exciting enough.

But it’s not. And here I shall break you off a piece of the deliciousness you are about to experience:

This particular alumnus happens to be…

1) FIV+
2) An adopter in his own right
3) HUCKLEBERRY ROSENBERG.

Any adoption from our FIV+ Suite is especially triumphant, and Huck’s was no different. But this bright berry sweetened the pie by — as you’re about to see — adopting a small and magical human for his very own.

And then there’s the question of the cat in question. For those who remember Huckleberry Rosenberg, #3 speaks for itself. For those who don’t, well, you’re about to never forget him.

This is where I stop yammering and hand things over to AwesomeAdopter Extraordinaire Alicia…and Huck and Evie:

“When I adopted Huckleberry, I promised he wouldn’t be in a house with other cats. His adoption profile made it clear he was no fan of his own species. But in that same profile, Huckleberry’s attitude towards children was listed as ‘?’ More on that in a moment.

“By the time I adopted him, Huckle had gone by the names of Finnius and Mulberry, all before he was even one year old.

“I was 21 and living on my own for the first time. I was working in a group home for developmentally delayed adults, while going to community college for Fine Arts. My parents and sister had just moved to North Carolina, and I wasn’t ready to leave.

“Huck became not just my companion, but also my guardian, and my freaking partner. I was a “cat lady” with just one cat! Then, four years ago, I moved to North Carolina from New Jersey.

“Huck has always been a family/friend fave. He’s what I’d call a ‘cat-dog’ (diggity dog), and everyone loves him…even those who are not ‘cat people.’ Huck still gives hugs all the time, and luckily, it turns out he is really good with my baby.

“But look at these videos!

“Little Evie is obsessed with Huck, and he is so tolerant.

“I love what your organization is doing for the world, and when I have enough money to donate, I definitely will. Thank you for Huck, and please forever keep doing what you’re doing!”

If you are not currently spinning in your chair with the force of 10,000 happy hurricanes, make haste and watch those videos again. Huckleberry wins!