Donate
Here I am! 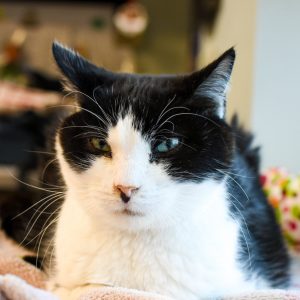 Certain cats have always been here.

Before the foundation of Tabby’s Place was lain; before life dragged any of us bedraggled humans onto the scene; long before there was even a Ringoes, NJ, they were here.

Can you blame us for wanting them to always be here?

But there was a time, somewhere between eternity and 2007, when Puzzle’s primary message to the (human) world was, “I am not here!”

Being approximately 900 years old myself, I remember the day Puzzle and his compadres arrived. He was one of four fearful cats from the same shelter, all twitchy and terrified and fixin’ to diiiiiie of anxiety. But even in such cowardly company, Puzzle was uniquely angsty. I witnessed it myself as he scaled the solarium wall and ran along the top fencing, his petrified toes tripping a razor-thin line. He would break the laws of physics if that’s what it took to get away from our tremendous, terrible love.

I would like to say that our tremendous, terrible love broke through in a supernova of sweetness, but that’s not at all what happened. Puzzle remained terrified. Puzzle plowed under blankets and behind braver cats and into the furthest corners of cubbies, all the while protesting, “I am not here!” He was happiest when we were unaware of him, presumably elated when the last horrid human left the building. If we were not here, he could be here.

But. You can break the laws of physics all you like, but you can’t escape your own holy here-ness. For all his protestation, Puzzle was seen, and known, and chosen.

And that — not us, but Puzzle’s tenacious, terrific, tough and tender adopter — made all the difference.

With his missing piece acquired, Puzzle pranced off into a life he wouldn’t have chosen but desperately needed. Puzzle’s ma tuned his trembling ears to his very own theme song. By the time we saw him again, he was living at a higher frequency.

Puzzle’s ma should have always been there. She would have, if it were up to her. But death, the final thief, took her, and the good people who loved her took Puzzle back to Tabby’s Place, and nobody knew quite what to expect. 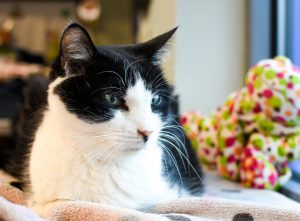 We needn’t have worried. Puzzle announced immediately, “Here I am!”

From then on, Puzzle lived each hour as though his name was being constantly called. “Here I am!” He pranced to the front of the Community Room, claiming the affections you would hereby lavish upon him. “Here I am!” He reported to Ginny’s desk, hurtling himself into a heap of happiness. “Here I am!” He launched into the window, Chief Cuddle-Buddy for every cat.

In those in-between years, a miraculous eternity away, Puzzle had become convinced: by golly, he was beloved.

You know and I know that this is the hardest thing to convince anyone (although cats accept it a little more easily than humans). It can seem unsafe and unstable to fully believe you’re fully loved. After all, what if you’re wrong? 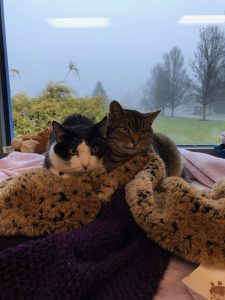 Ah, but what if you’re right?

It might seem that Puzzle had suffered the ultimate insult to belovedness. The floor dropped out from under his life, and the one who loved him most and best was gone. But healing had happened, and it was irreversible: Puzzle knew he was safe and held and whole in this world, and that unblocked his long-hiding hoard of happiness.

We’ve been the giddy recipients of Puzzle’s very-present presence for the past four years now, and he’s nothing sort of a soul-sherpa to all of us (feline and otherwise). He cuddles the newcomers (feline and otherwise); he celebrates the sunshine; he is the wise friend who has clearly always, always been here. The paperwork says he arrived in 2007 and again in 2016; the truth is that he was somehow waiting for us all long before that.

Surely he will be here, with us, forever.

That’s the longing that has us in knots these days. Puzzle, the beloved, has cancer; that’s nothing new. (It’s three years old, in fact.) He sailed through chemotherapy without losing a speck of his sparkle; his autumn 2019 ultrasound was triumphantly clean. 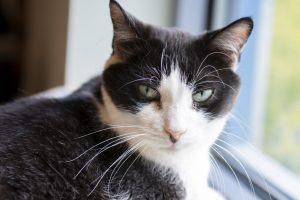 But Puzzle’s cancer is coming back, a shadow spreading in over all the corners. At least, so it seems. Diagnostics have produced results that are, and I quote, “non-diagnostic,” which is a highfalutin way of saying “we’re not sure.” But all signs point to cancer, back and biting after three years away.

We’d initially hoped that his winter weight loss was due to an upper respiratory infection that hit the whole sanctuary so hard, it was referred to as a living being, The URI. But not even The URI could explain Puzzle’s continued weariness, his quietness, the way his “Here I am!” was whispered and whittled down to a “Here…I am.”

As of this writing, Puzzle’s plans are unwritten. We’re monitoring his quality of life closely, and avoiding invasive treatments that would sadden his life without stretching it. And so I ask you for your prayers for this wonder-presence of a friend. 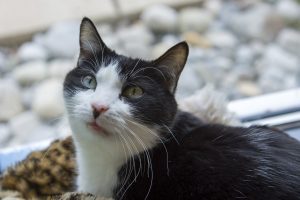 But I also ask, on Puzzle’s behalf, that you remember you are here, too. These are the days — the imperfect, infuriating, miraculous and magnificent days — we’ve been given. The sun shines on your blanket, too; there are friends to be found even if you’ve never had one before; and you are, no matter what you try to do about it, beloved. All that’s asked of you is to say, “Here I am.”

Puzzle has always been here, for us; today, and forever, we’re here for him, too.