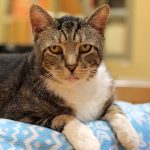 Of course he departed on the 4th of July.

Of course the cat who cried “FREEDOM!” made us cry on Independence Day.

Of course the king with a heart of fire rang his Liberty Bell with fireworks overhead. 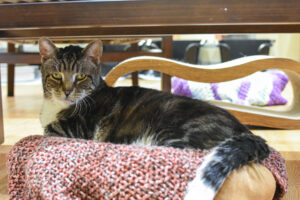 There are bells ringing on both sides of the veil today. Bellamy came; Bellamy conquered; Bellamy crashed through the final wall of this world, and we see him no more.

That’s not quite accurate. We see him everywhere. We hear the firecrackers. We feel the zizzle of a sparkler between our fingers, even though our fingers have slipped over that improbably long tail for the last time.

If I live to see a hundred Fourths, I will always glimpse the after-light of Bellamy in the sky, that “did you see it?” echo of an explosion that’s technically over.

The most bombastic of our Manhattan cats, Bellamy was equal parts buffoon and poet laureate, warlord and warm-heart. Along with fellow New Yorkers Grecca and Bosco, Bellamy was gifted the honor of a place in the lobby, that languid land where old cats and needy cats get spoiled and shnoogled and serenaded with a thousand Sousa marches, by which I mean tubs of stinky meat product.

Bellamy, being old and needy (although he preferred the term “need-rich”), was fully expected to be a fully cooperative lobby cat. With serious eyes and a plodding pace, he was sure to settle in and settle down among his sweet, sleepy neighbors.

Bellamy was born to settle scores and unsettle simpletons. And, to Bellamy, every cat who ever trod the earth is a simpleton, a schlemiel, and sorely in need of a bellowing beat-down.

(Sole, shining exception: Boobalah, Bellamy’s beloved, for reasons known only to the Bell and the Boob.)

And so the trouble began. 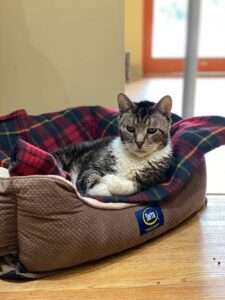 First, it made some sort of sense. If you store your fireworks too close together, explosions are inevitable, and so Bellamy went ballistic when he spied someone sparky. Olive, Disco, Honey (who he once sprayed in the face through a baby gate, some doctoral-level disrespect); these were understandable targets.

But Bellamy was born to be all the bombs bursting in air. All of them. By which I mean, he was exuberant, explosive, elated to annihilate all of the cats. All of them.

If you are capable of clobbering Rose, She Most Gentle, She Most Thornless, you are a certain kind of punk rock.

But Bellamy was a billion bells, impossible to reduce to either affection or insanity. To love him was to love his whole spangled sky. 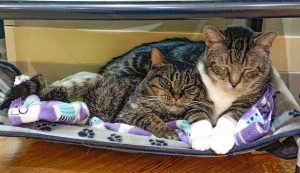 The terror of cats was simultaneously the tower of tenderness. So, he wanted to be the rowdiest Roman candle; so, his fire was always crackling; so, he believed that independence meant breaking the chains of catliness, coming into his own as The Bellamy, a species unto himself, complete with flags and anthems and pageantry and power. (Infinite power.)

At the merest glimpse of a sad human or a glad human or a rad human (and in Bellamy’s serious eyes, we are all rad), Bellamy’s clanging cymbals and cracked bells calmed to a lullaby. The firework had work to do, big bursting work, loving people’s pieces back into peace, galloping until grievers laughed again, lap-napping until tired souls felt their worth.

His eyes had seen all kinds of glory, and he was giddy to share it. 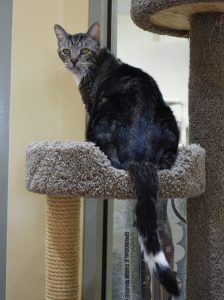 Which is why we find ourselves shivering in July, greedy for just a few more days with the mad, wise, marvelous king.

Although Bellamy battled some medical gnats from time to time, he gave us the luxury of forgetting his age. The technical season may have been winter, but Bellamy was a man of stubborn summer. So when pancreatic cancer came calling, we wanted to believe the bells of victory would vanquish yet another foe.

In a sense, of course, they did.

But not in the sense we would choose.

We want him here. We want to glimpse him galloping across the lobby and chomping into cats’ legs like drumsticks and causing every single staff member to lose every shard of patience and shout, like an anthem, “BELLAMY!!!!!!!!!!!!!!!!!” 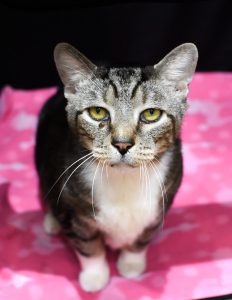 But there are cats to chase across the veil, golden lobbies in need of patrol, simpletons to be smacked and perimeters to be circled.

Let the circle be unbroken.

Let the bellwether, bombastic and beloved, lead us on even now.

Let the fire work on us all of our days, unquenched by death.

His beautiful bravado is galloping across the sky, begging us to cry “FREEDOM!” daily.

Freedom to be heat and light.

Until we meet again, beloved boy, all our bells are ringing for you.